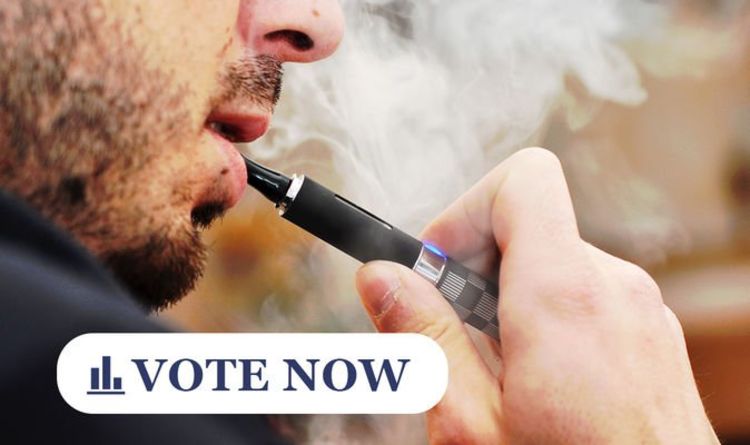 Smoking and vaping: NHS shows difference between the two

The Medicines and Healthcare products Regulatory Agency (MHRA) has issued guidance stating that e-cigarette manufacturers can now submit products to go through the same regulatory approvals as other medicines. Currently, e-cigarettes are a legal consumer good sold in the UK to anyone over 18, but the MHRA’s approval of e-cigarette as medicine could make way for a new NHS scheme which would see England becoming the first country in the world to prescribe e-cigarettes to smokers.

Non-smokers and children continue to be strongly advised against using e-cigarettes, but they are seen to be a “step down” from normal cigarettes, as evidence suggests they are less harmful, and could help addicts transition into a non-smoking lifestyle.

Professor Nick Hopkinson, a consultant physician at the Royal Brompton and medical director at Asthma UK and the British Lung Foundation, said: “There is already good evidence that commercially available e-cigarettes enable people to switch away from smoking to a much safer alternative.

“However, lithium polymer battery pack the development of medicinally licensed e-cigarettes would be a really important step forward, providing patients and healthcare professionals with an additional tool to break dependence on smoking, backed up by the reassurance that comes from a rigorous authorisation process.”

Health Secretary Sajid Javid has voiced support for the approval of e-cigarette prescription by doctors, hoping that such a scheme would “level up” health standards across the UK.

He said: “Opening the door to a licensed e-cigarette prescribed on the NHS has the potential to tackle the stark disparities in smoking rates across the country, helping people stop smoking wherever they live and whatever their background.”

An e-cigarette scheme could decrease the number of smokers who develop diseases such as cancer, heart disease, stroke, lung diseases, and diabetes.

Almost 64,000 people died from smoking in England in 2019 while there are still around 6.1 million smokers in the nation, according to government figures.

Illness caused by smoking places a huge burden on the NHS, and scientists have argued that introducing an e-cigarette scheme would save the UK money in the long-run.

According to wellbeing service One Small Step, the cost of smoking to the UK Government is approximately £12.6 billion a year.

That figure is made up of £1.4 billion spent on social care for smoking related care needs, £2.5 billion spent on NHS services and £8.6 billion of lost productivity in businesses – because of cigarette breaks.

Would you support a move to prescribe vapes if economists predict the scheme would save the NHS money overall? Vote now.

But there are international concerns that e-cigarettes are extremely addictive, and some users are at risk of chain-smoking e-cigarettes because the health risks are not as high as normal cigarettes.

In 2019, Professor Thomas Munzel from the Mainz University Medical Centre in Germany argued e-cigarettes are so dangerous countries should consider banning them.

Prof Munzel and his colleagues said there is only a “paucity of evidence” to support claims e-cigarettes are a “healthy” alternative to smoking or that they help people quit.

In fact, several countries around the world have made it illegal to sell vapes, including Brazil, Colombia, Egypt, Japan and India.

In Qatar, North Korea and Singapore they are illegal to use and sell.

In order for the UK to begin prescribing vapes to smokers, such a scheme would require approval from the National Institute for Health and Care Excellence.

Currently, doctors can prescribe Varenicline and Bupropion in tablet form to help people stop smoking, and the NHS recommend nicotine patches and gum that can be bought without a prescription.

Do you think the NHS should push for the scheme to be approved? Let us know your thoughts in the comments section below.

Make sure you’re never left behind by receiving the biggest news of the day covering politics, royal, and finance. Sign up for the Daily Briefing alert here: /newsletter-preference-centre