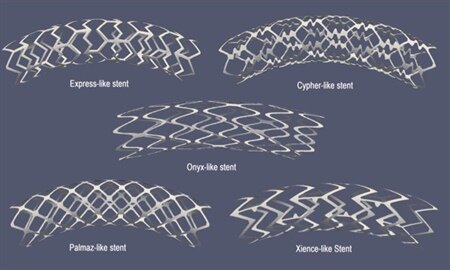 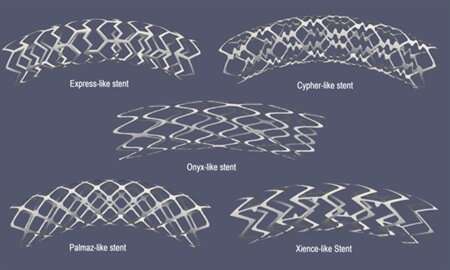 For patients with symptomatic coronary artery disease, the best course of action often involves implanting a drug-eluting stent into the artery where a plaque buildup is blocking blood flow to the heart. The metallic stent props the artery open while releasing a drug that helps to suppress restenosis—the re-closure of the artery due to excess tissue growth around the stent. However, the body’s response to tissue inflammation and arterial injury around the stent’s edges can still sometimes cause restenosis.

In a paper that published in the SIAM Journal on Applied Mathematics, Sunčica Čanić, Yifan Wang (both of the University of California, Berkeley), atazanavir ritonavir combination brand name and Martina Bukač (University of Notre Dame) develop mathematical models that represent a drug-eluting stent in an artery and investigate how the stent affects arterial tissue permeability and blood flow. “I believe that our work may help clinical workers understand certain pathologies of stent-related restenosis and eventually improve patient outcomes,” Wang said.

To accomplish this objective, the authors used several novel elements that are not present in previous stent models. “For the first time in our study, drug-eluting stents were computationally evaluated based on their performance in moving arteries modeled as poroelastic materials, with arterial wall permeability depending on the deformation of the arterial wall,” Čanić said. Poroelastic materials are solids with many pores through which fluids can flow, like sponges or the biological tissues that make up artery walls. The degree to which fluids can permeate the tissue wall depends on changes in the volume of the pores.

“We showed that the presence of a stent affects the deformation of the arterial tissue at the stent location, which changes the permeability properties of the tissue,” Čanić said. “This, in turn, influences how an anti-inflammatory drug that coats the stent penetrates the tissue and prevents inflammation.” 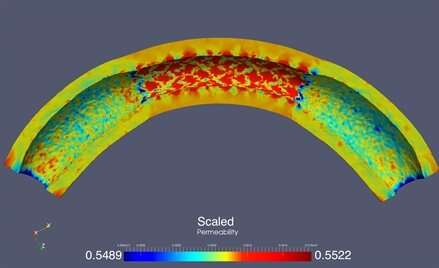 The researchers were inspired to follow this line of questioning by their partnership with David Paniagua of Baylor College of Medicine and Michael E. DeBakey Veterans Affairs Medical Center in Houston, Texas. Paniagua, who performs procedures with drug-eluting stents daily, suggested that the authors investigate stent performance and the way in which the coating drugs elute into the tissue. “I believe that modeling drug-eluting stents helps us better understand their behavior and aids in the clinical decision-making process by providing clinicians with more information,” Bukač said.

One remaining challenge in the field of drug-eluting stent design is the “edge effect,” in which restenosis may occur at a higher rate near the outer borders of stents. After a stent is implanted, the interior of the artery near its edges continues to decrease in size for some patients, which constricts blood flow.

Čanić, Wang, and Bukač utilized two sets of mathematical models to investigate exactly what causes the edge effect. The first is a fluid-structure interaction model, which represents the flow of blood through arteries and the arterial wall tissue’s response to the periodic changes in blood flow that occur as the heart beats. The second model is a system of advection-reaction-diffusion equations, which represent how the anti-inflammatory drug in the stent coating undergoes chemical reactions, diffuses into the arterial wall tissue, and moves within the interior of the stented artery.

“These two sets of models are coupled,” Čanić said. “The fluid-structure interaction model ‘informs’ the advection-reaction-diffusion model about the blood and blood plasma velocity that carries the drug, and enables the elution of the drug into the tissue.” The authors defined this coupling on a moving domain to represent the interaction between the flood of blood and the stented artery. Their model could represent five different geometries of metallic stent platforms, as well as two different kinds of coating drugs.

The researchers began by examining the way in which stent implantation altered the permeability of arterial wall tissue, which in turn affects how well the drug is able to elute into the tissue. The models showed that tissue pores expanded between the struts that make up the stent, resulting in an increased permeability. But near the stent’s edges, the permeability was low since its rigidity prevents the adjacent tissue from expanding freely. This is clearly problematic. “Lower permeability near the edges of the stent may compromise drug elution in that neighborhood,” Čanić said.

Čanić, Wang, and Bukač next investigated how the differing elasticity of the normal artery and the stented artery influenced the dynamics of blood flow. They found that “recirculation zones” form near the stent’s edges, where blood circulates in one area instead of flowing down the artery as normal. This phenomenon seems to be caused by the mismatch in elastic properties at the boundaries between the stented and non-stented regions.

The recirculation zones in combination with the low permeability is a dangerous mix—both contribute to the edge effect, leading to excess tissue growth around the stent that could eventually cause restenosis and re-block the artery. The researchers are now working to design a stent that could avoid this problem by investigating whether the addition of a coated “stent-graft skirt” near certain stents’ edges may help counter the edge effect and reduce the rate of restenosis. They are collaborating with Paniagua to design the skirt and plan to perform laboratory experiments with the new design.

The work from this study could potentially find applications to help real patients. “This approach could be used in patient-specific situations, like with arterial models that are obtained using medical imaging,” Bukač said. And the authors’ mathematical modeling approach may also have more far-reaching clinical applications.