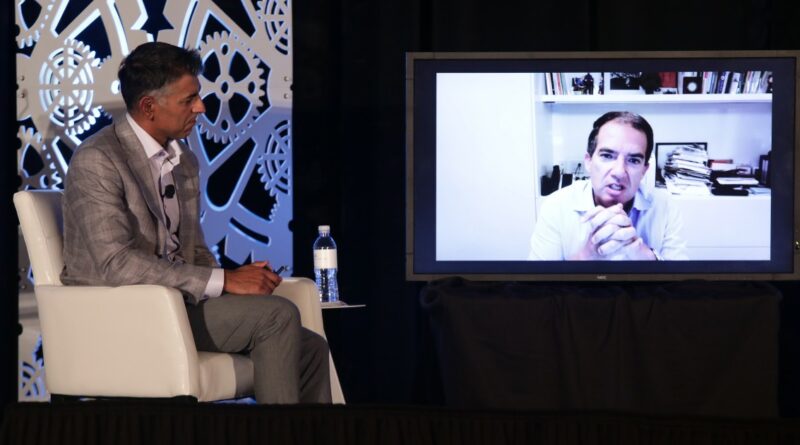 LAS VEGAS – When the COVID-19 pandemic began to set off alarm bells among epidemiologists in late 2019, Moderna had 800 employees. That year, it had made 100,000 doses of product. It planned to launch its first vaccine around 2024.

But when Chief Executive Officer Stéphane Bancel got the call to develop a vaccine against the emerging disease, he felt confident that the company could go from a genetic sequence of the virus to a clinical-grade product in a matter of months.

“They all thought I was nuts – the funny French guy with the French accent,” Bancel said during a HIMSS21 “view from the top” session on Wednesday, po clindamycin mrsa hosted by VMware president Sumit Dhawan.

Fast forward to a now familiar story: millions of Americans have been vaccinated against COVID-19, many of them with the mRNA vaccine that Moderna produced.

We’re of course not out of the woods. The Delta variant has torn through the world. And although unvaccinated people feel the effects particularly severely, vaccinated people are also experiencing breakthrough infections.

“The virus is never going to go away from the planet,” said Bancel. He guessed that it would continue mutating “a lot” through the summer or the end of 2022.

“I think there’s another 12 to 18 months of … mutations coming,” he predicted, and those mutations could combine. The so-called Beta variant, first identified in South Africa, and the Delta variant are likely to do so soon.

“The good news is the vaccines are working well at preventing hospitalization and severe disease,” he said.

Moderna’s team, he said, is working on booster shots and tweaking the sequence to try and respond to those variants.

“The next 12 to 18 months are still going to be pretty intense, pretty complicated,” he said.

After that, he sees a future in which few enough people get infected that the mutation rate slows – that, similar to the flu, people will get a shot every year aimed at protecting them from the most recent variant.

In fact, one of Moderna’s goals is to create a vaccine that would combat both respiratory illnesses.

In the meantime, he said, it’s important for unvaccinated people to get inoculated, “because the virus is only going to grow more and more virulent, more and more infectious.”

Bancel also described initiatives at Moderna to enhance digital capabilities, such as its partnership with a California university to get all employees up to speed on artificial intelligence and machine learning.

“We as leaders in enterprise have to understand that sometimes technology is way ahead of where the human brain is, and part of our job is to get people to the place where they can embrace and leverage it,” he said.

Looking ahead, Dhawan noted advances in 5G as a heartening signal of innovation, saying VMware is investing in research and development as well as working with telecommunication providers to expand connectivity.

For his part, Bancel foresees what he called a democratization of healthcare.

“I believe the pandemic made a lot of people realize that they didn’t know much about [their] health,” he said.

He predicted the development of technology that provides actionable, customized advice to patients based on their individual circumstances.

Even with the challenges posed by the last few years, “It’s an exciting time to be alive … and to contribute to science and technology to make the world a better place.”