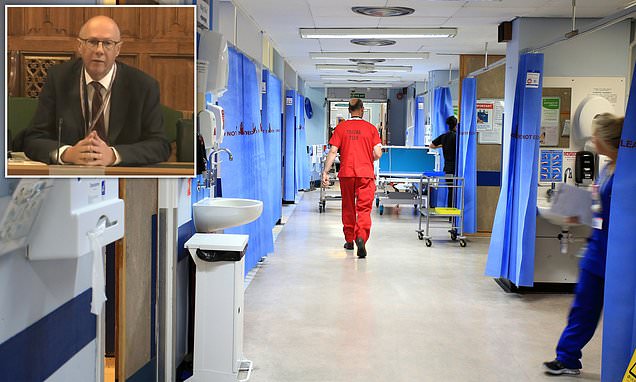 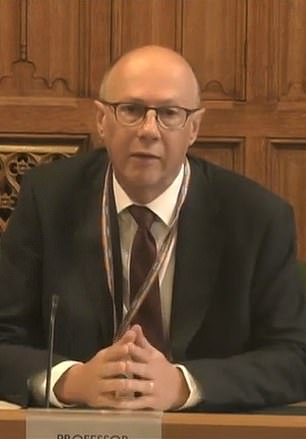 Professor Stephen Powis said: ‘I think that we need to move in our hospitals much more to single rooms being the default for privacy and dignity, for infection control and actually for flow issues’

Patients should be given single rooms in hospitals by ‘default’ rather than put on wards to stop infections spreading, an NHS boss said today.

Going forward, hospitals should be built around single rooms, he said.

As it stands, patients are automatically put into wards when they arrive at hospital.

But patients can pay between £100 and £350 a night to stay in a private room while receiving NHS care — such as after giving birth.

There are around 120,000 NHS hospital beds in England.

During the pandemic, hospitals were forced to cut bed capacity to ensure social distancing between patients.

Buildings also had to be divided into Covid and non-Covid areas in an attempt to reduce transmission to uninfected patients requiring hospital care. 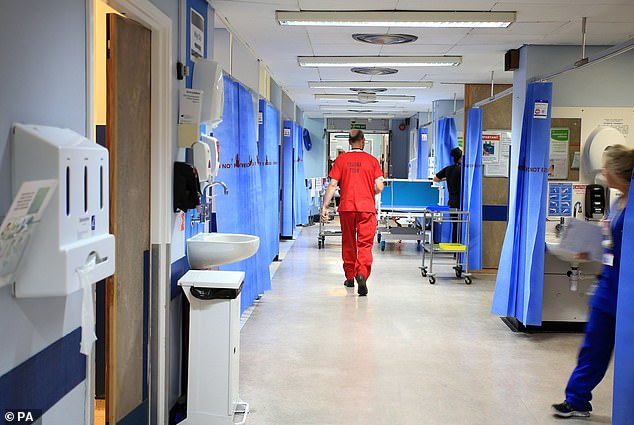 There are around 120,000 NHS hospital beds in England. During the pandemic, hospitals were forced to cut their bed capacity to ensure social distancing between patients. Buildings also had to be divided into Covid and non-Covid areas in an attempt to reduce transmission to uninfected patients requiring hospital care

There is no ‘set number’ for how many face-to-face appointments GPs should provide, the head of NHS England has told MPs.

Amanda Pritchard said that many patients liked in-person consultations but that others found phoning a GP or going online more convenient.

Data shows that 58 per cent of patients were seen face-to-face in August in England, compared with 54 per cent at the peak of the second wave in January and more than 80 per cent before the pandemic.

Health Secretary Sajid Javid set out plans last week for more cash for GPs, but also ways in which they can be named and shamed in league tables depending on how many patients they see in-person.

It comes as a snap poll for the British Medical Association found doctors ‘overwhelmingly’ rejecting the Government’s plan, with 93 per cent of 3,500 GPs saying it was an unacceptable response to the crisis.

Speaking to MPs on the cross-party Commons health committee, Ms Pritchard said: ‘I’m really conscious that the vast, vast majority of colleagues in general practice have worked, and continue to work, absolutely tirelessly.

‘In fact, they’re the building block of the NHS and they continue to be.’

She said the package announced last week was about the ‘need to put some money behind supporting general practice’.

She added: ‘I think we have really tried to steer away from saying that there is a kind of a right number for face-to-face versus other types of access, because what’s clear is many people absolutely do prefer face-to-face access, GPs are required to provide it, it’s part of the contract, but for some populations, it’s going to be a particular number, for others it will be different.

‘So what we’ve talked about in the document is respecting patient preference.

‘Because what I hear is many, many people say it is hugely convenient being able to phone a GP or do a digital consultation, ‘it saves me lots of time unnecessarily travelling to a GP practice’. But it’s absolutely right that that isn’t going to work for everybody and it’s not going to work for every circumstance, and therefore respecting patient preference is the bit that we have said is really important here.

‘So, for those practices… where the percentage of face-to-face care is very low, that does feel out of step with what we’re hearing across the rest of the country, and we need to give them particular support.’

Speaking to MPs on the Health and Social Care Committee for tackling the Covid backlog, Professor Powis said: ‘Personally, I feel coming out of the pandemic one of the things we need to think really hard about is the number of single beds that we have.

‘I think that we need to move in our hospitals much more to single rooms being the default for privacy and dignity, for infection control and actually for flow issues.

‘That’s something we need to think hard about as we build the hospitals of the future.’

He also said extra bed capacity should be added to the NHS.

This would give the health service headroom during the winter when hospitals get busier and during future health crises.

The Department of Health announced in July that 40 new hospitals would be built in England by 2030 — but it is not clear whether these will be built around a private room model.

There are currently more than 7,000 patients in hospital with Covid across the UK and 921 were admitted with the virus today.

As the pandemic hit the UK last March, NHS England told trusts to discharge all hospital patients who were safely able to leave and postpone all non-urgent operations in an attempt to reduce transmission in hospitals and treat the influx of Covid-infected patients.

And hospitals were forced to work with less capacity during the pandemic to allow for physical distancing between beds.

The moves led to a backlog for routine hospital treatment, which hit another record high of 5.72million in August, according to the latest NHS England figures.

Officials dropped guidance on social distancing, allowing for it to be cut to 1m in some low-risk areas of hospitals, which no longer need to be deep-cleaned between uninfected patients.

It comes as a report published by NHS Digital last week revealed it the would cost £9.2billion to complete upgrades to buildings that should already have been done.

The bill – which is 2.2 per cent higher than last year – includes maintaining 10,258 hospitals and other buildings, as well as ambulance services.

Chancellor Rishi Sunak’s spending review, which is due to be released later next week, and will detail how much cash the NHS will get over the next three years.

The health service has already been promised a £30billion handout to clear the record-high waiting list for elective care that has amassed during the pandemic.

Professor Powis, who spoke to MPs with NHS England head Amanda Pritchard, also discussed the lack of face-to-face appointments in general practice, which has led some patients to attend A&E instead.

Data shows that 58 per cent of patients were seen face-to-face in August in England, compared to more than 80 per cent before the pandemic.

Health Secretary Sajid Javid set out plans to name and shame GP surgeries that do not see enough patients in person.

Professor Powis: ‘I think there is no doubt that there are some patients who are attending A&E still who would be better off being seen in another setting – that was the case pre-pandemic as well.

‘For exactly those reasons, the use of services such as 111, the use of digital online 111, is all designed to ensure that people don’t make a trip to the service when actually they could be dealt with quicker and more efficiently in another [area of the health] service.’

Ms Pritchard said the ‘vast, vast’ majority of GPs are working tirelessly and health chiefs have ‘tried to steer away from saying that there is a kind of a right number for face-to-face versus other types of access’.

She said some patients in-person appointments, but others find it ‘hugely convenient’ to see GPs  remotely.