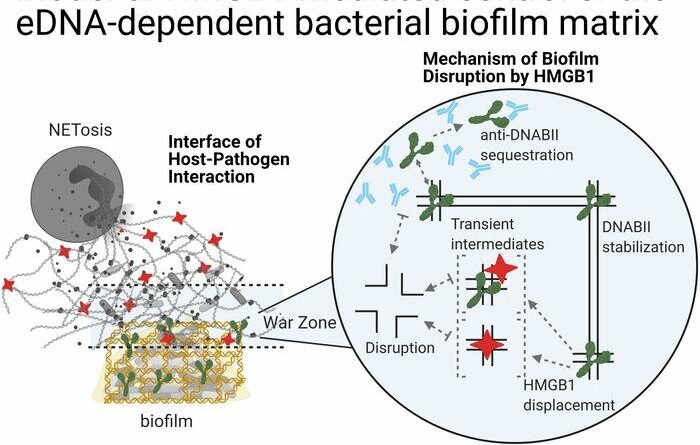 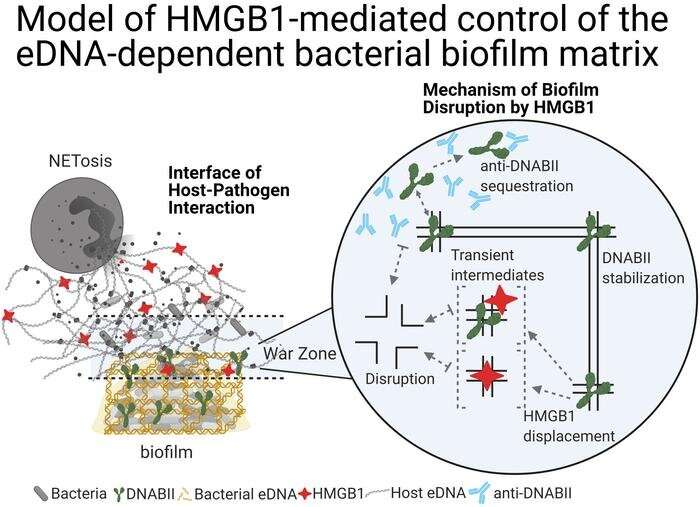 A team of researchers in the Center for Microbial Pathogenesis in the Abigail Wexner Research Institute at Nationwide Children’s Hospital recently characterized the anti-biofilm properties of HMGB1, a protein innate to eukaryotes and the immune systems of vertebrates, glucophage and pregnancy engineered modified molecules of the protein, and tested a therapeutic cocktail consisting of those molecules and antibodies that remove DNABII, a bacterial-DNA-binding protein. They demonstrated in a variety of models that delivering this molecule to a host facilitated the rapid and full clearance of highly resistant biofilms without inducing an inflammatory response.

Steve Goodman, Ph.D., a principal investigator in the center, and his colleagues, Lauren Bakaletz, Ph.D., the center’s director, and Santiago Partida-Sanchez, Ph.D., also a principal investigator in the center, showed that HMGB1 cleared multiple pathogenic biofilms in vitro and resolved biofilm-mediated infections in two distinct animal models of human disease—a mouse lung infection model and in a preclinical experimental model of otitis media, or middle ear infection in a chinchilla. The study, published in the Journal of Clinical Investigation (JCI), is the first to result from an R01 grant from the National Institutes of Health awarded in the fall of 2020.

“Disrupting pathogenic bacterial biofilms is a novel remarkable ability for HMGB1,” says Dr. Partida-Sanchez. “HMGB1 is a well-known innate immune effector involved in inflammatory diseases, but until now, its antibiofilm capacity was unknown.”

Disease-causing bacteria can build and live in biofilms, treatment-resistant reservoirs that continually fuel chronic and recurrent infections, such as those of the middle ears, sinuses and urinary tract. The prokaryotic cells adhere to each other (forming adherent biofilms) or to surfaces (forming attached biofilms) and produce extracellular polymeric substances (EPS)—specifically extracellular DNA (eDNA)—that are organized into a protective matrix around them, effectively shielding their colonies from the immune system and antibiotics.

According to the Centers for Disease Control and Prevention (CDC), bacteria in this biofilm state, which are responsible for approximately 80% of human bacterial infections, can be up to 1,000 times more resistant to antibiotics than those that are “free-living.” As a result, biofilms often need to be collapsed in order for the bacteria within them to be completely cleared from the body; partially sloughing away these communities can actually spread the pathogens while leaving the initial colony intact.

Drs. Bakaletz and Goodman have been studying biofilms and developing therapies to dismantle them for more than a decade.

They and their teams identified DNABII as the DNA-binding protein most essential to stabilizing the protective lattice of bacterial biofilms and developed an antibody that can target and remove it.

In a report published in Proceedings of the National Academy of Sciences in November 2019, the investigators showed Holliday junction (HJ)-like structures form the vertices where strands of eDNA cross in the lattice structure of biofilms, and DNABII fortifies these structures by binding to these HJs and locking them in place. When the researchers introduced the protein RuvA, which also binds to and stabilizes HJs, while also introducing an antibody capable of removing DNABII, the biofilm’s structure held strong. But when they introduced both RuvB and RuvC, which destabilize HJs when combined with RuvA, the biofilm collapsed.

Now, the team has discovered HMGB1 also disrupts biofilms’ structures. The role of HMGB1 and DNABII in vertebrates and bacteria, respectively, is similar: both bind to and bend DNA. As a result, HMGB1 competes with DNABII to bind to these HJ sites. When HMGB1 binds to the HJ-like structures of the eDNA lattice, however, it does not stabilize them like DNABII would. Instead, the structures collapse.

“We knew DNABII and HMGB1 proteins bind to the same types of bent DNA sites. This is the first evidence, however, that they don’t function in the same way at these sites,” says Dr. Goodman, who is also a professor of Pediatrics at The Ohio State University College of Medicine.

An innate protein in hosts’ immune systems, HMGB1 is an integral part of neutrophile extracellular traps (NETs) which gather bacteria for targeted elimination and prevent the spread of bacterial biofilms. If the right concentration is released, HMGB1 stops bacteria from propagating. Too little HMGB1, however, allows biofilms to persist, and too much HMGB1 is associated with sepsis, an uncontrolled inflammatory response to microbial infection.

Developing HMGB1 as an anti-biofilm therapeutic requires ensuring those proinflammatory properties are reduced or eliminated. The derivative of recombinant HMGB1 developed and studied by this study’s team was engineered with a single C45S amino acid mutation to maintain the protein’s anti-biofilm function while weakening its proinflammatory function.

Importantly, the researchers also found when HMGB1 was used simultaneously with the DNABII antibody that can target and resolve biofilm infections, there was a strong effect on biofilm disruption in vivo. Both proteins are powerful when used separately, but they may not always clear entire biofilms alone. When the researchers used them together in the otitis media animal model, however, there was evidence of a strong additive effect and no evidence of any residual biofilm.

“Both anti-DNABII and HMGB1 are highly effective at resolving biofilm infections on their own. This new HMGB1 approach gives clinicians additional options to empower their patients’ immune systems to clear biofilms, a powerful means to end chronic and recurrent infections,” says Dr. Goodman.

“Future work to create new, engineered derivatives of HMGB1 that are easily scaled for use in the clinic will further advance these additional options,” adds Dr. Bakaletz, who is also a professor of Pediatrics and Otolaryngology at The Ohio State University College of Medicine. “These discoveries are just the starting point.”