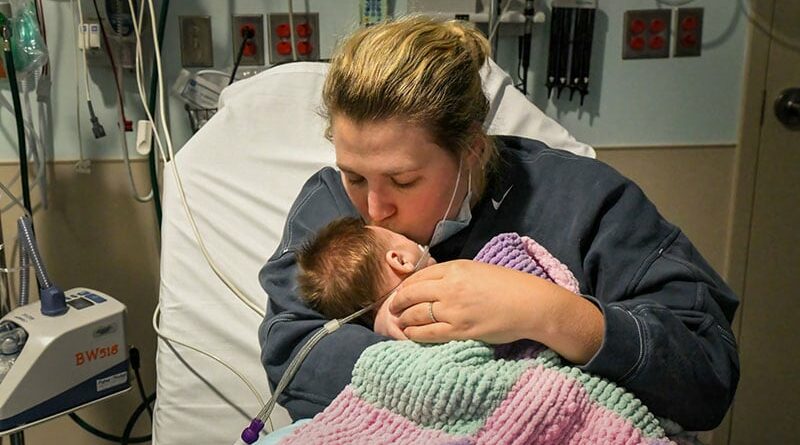 Waiting for their turn in the emergency room, dazed-looking parents in winter coats bounced crying children in their arms, trying to catch the eye of Dr. Erica Michiels. Us! Pick us next! they seemed to plead with tired eyes.

“People have been out here waiting for a couple hours, which is heartbreaking,” she said.

Typically, the ER at DeVos Children’s sees about 140 kids each day, according to Michiels, but on a recent Tuesday in early December, they saw 253.

“I hate when we have a wait,” sighed Michiels. “But for right now, we can’t do it any other way.”

Like many other children’s hospitals across the nation, the capacity of the staff at DeVos Children’s has been stretched by waves of patients with RSV and, increasingly, the flu.

This surge of sick kids is coming after years of some U.S. hospitals cutting back on pediatric beds — in part because it is typically more profitable to treat adult patients. The remaining pediatric beds are increasingly concentrated in urban areas, leaving families in rural areas to travel longer distances to get care for their children.

When Staci Rodriguez brought her 9-month-old son into the ER in their hometown of Shelby Township, Michigan, she was desperate. Santiago Botello Rodriguez, who has big brown eyes and long eyelashes that everybody gushes over, had been sick for days. First Santi stopped eating, so she took him to urgent care, she said. Then he started sleeping 20 hours a day, so Rodriguez went to the pediatrician. She said she was sent home, after being told Santi was just fighting a virus.

Within hours of leaving the pediatrician though, Santi “was so much worse,” Rodriguez said. “His fever was way too high. I couldn’t get it down.” She took him to the ER, where doctors told her Santi had RSV, and that his oxygen saturation levels were dangerously low.

Rodriguez said staff members at the Shelby hospital told her that they couldn’t give him the care he needed, and that they didn’t have the proper equipment.

Out of 130 acute care hospitals in Michigan, 10 currently have pediatric ICUs, according to the Michigan Health & Hospital Association.

The ER wanted to transfer Santi immediately, but Rodriguez said that first there was an agonizing wait while the medical team deliberated where to send him. A hospital in Muskegon was much closer, but DeVos could offer more intensive care.

“So they sent us to DeVos, and he had to ride in the ambulance,” she said. The trip took an hour. “I thought I was going to be able to hold him.”

But for safety, Santi needed to be strapped to the stretcher. “Luckily, he just kind of stared at me the whole time, and then eventually fell asleep,” she said. 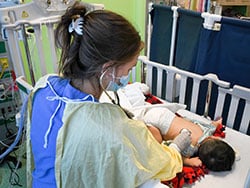 Rodriguez watched the beeping monitors as she recounted their story in the hospital room at DeVos Children’s, which had been partitioned to make room for another sick infant and his family.

Moments before, six staff members had assembled around Santi’s bed, speaking in soft tones as they worked to thread a tiny feeding tube through his nostril. Next, as Santi wailed, they held down his chubby arms to keep him still so they could take an X-ray to confirm the tube had been placed properly.

Afterward, Santi lay comfortably on his mother’s chest, a small oxygen tube taped to his face, his breathing labored, while he struggled against sleep. The baby kept both eyes trained on his dad, Saul Botello.

“I hate seeing him like this,” Botello said, his hands in his sweatshirt pocket, his own eyes glued to his son. Eventually, Santi’s heavy lids closed, and he slipped into a fitful sleep in the hospital crib. His mom rubbed his back, shushing him softly.

“He’ll be fine, just have to support him through [this],” said Dr. Andrea Hadley, chief of pediatric medicine at DeVos.

Hadley gets desperate calls from smaller hospitals or free-standing ERs in rural areas, asking if they can transfer their patients to DeVos Children’s. “I have had many calls come in where they said, ‘We’ve called 15 other places and they’ve all said no.'”

Big children’s hospitals like DeVos regularly get transfer requests. But in recent weeks, the calls are coming from a much larger geographical area, including parts of Illinois. Patients who live in Michigan’s Upper Peninsula typically go to Wisconsin for care, Hadley said, but now, those hospitals are full, too.

In response, DeVos Children’s has doubled up rooms, squeezing two patients (and their families) into rooms meant for one. The hospital is also allowing no more than one parent or guardian to stay overnight.

Even with those changes, Hadley said, the hospital has capacity to care only for the sickest children. 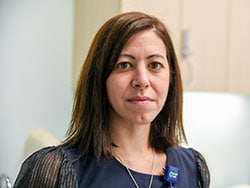 In the past, Hadley said, they’d take all referral requests from other hospitals. Across the health care industry, pandemic-era staffing shortages are adding to the strain. Michigan has lost 1,700 staffed hospital beds since 2020, according to the Michigan Health & Hospital Association. That’s left children’s hospitals scrambling during this RSV and influenza surge.

At the Children’s Hospital of Michigan, there’s enough staff to cover only about 60% of the beds, according to chief medical officer Dr. Rudy Valentini. With 40% of beds unavailable, children who need to be admitted must wait in the ER until a bed opens up.

“So we have ICU patients in our emergency department that can’t get up to our ICU,” Valentini said on Dec. 6.

The sheer number of pediatric patients, the bed closures, and the staffing shortages have created a perfect storm for children’s hospitals, leaving them with difficult decisions.

“There’s also a moral distress associated with the thought of having to turn patients away,” Hadley said.

“And how do we balance that distress that comes with knowing, potentially — if we as a system don’t stretch a little more — that there might be patients that are turned away?”

But stretching personnel already “on the brink of burnout” comes with its own risks, said Jamie West, a nurse manager at DeVos. On her floor, there are enough nurses to safely care for 18 patients. But recently, West said they’ve had to stretch the same number of nurses to care for up to 33 seriously ill patients. They don’t have enough electronic monitors for every patient either, Hadley added.

“These kids are just so much sicker [than we typically see during RSV season],” West said. “And when you think about nurses that are already in very large patient assignments, nurses are very worried that their child’s going to go downhill very quickly, that they’re going to maybe miss something because they’re spread so thin.”

At DeVos Children’s, Michiels is a constant blur of motion. One moment, the emergency medicine physician was doing a sepsis work-up for a 12-year-old boy whose fever wouldn’t break. The next moment, her pager went off and she strode down a long linoleum hall to the room designated as the “resuscitation room.” Staffers try to keep that one room open, Michiels said, for “the next blue baby” who’s rushed in.

In a room at the end of the hall, Caitlyn Houston hovered over her 7-week-old daughter, Parker, as nurses tied a small band around the baby’s flailing arm. Parker’s reddened face was bunched up in distress, her cries filling the small room. We’re going to admit her, Michiels told Houston — probably to the pediatric intensive care unit.

Still, Houston couldn’t help but ask: “But you’re not going to send us home, right?” 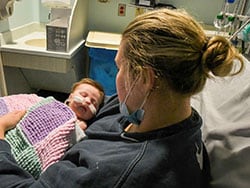 Caitlyn Houston holds her infant daughter, Parker, as they wait in the emergency department for a bed to open up.

No, Michiels reassured her softly. The two could stay. Houston said they’d spent the past several sleepless nights in and out of the ER.

“There’s so many kids in here that they have to take the ones that are really bad,” Houston said. “And even two nights ago in the middle of the night, the ER was packed. So we were there for two hours, waiting.”

Being told your infant may need lifesaving medical intervention is never good news, but for parents like Houston, being admitted to the hospital brings relief. Their child would at last get a bed.

This article is from a partnership that includes NPR, Michigan Radio, and KHN.