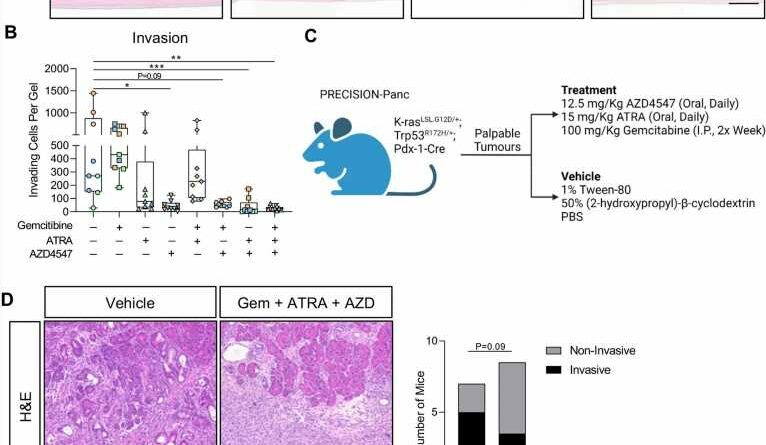 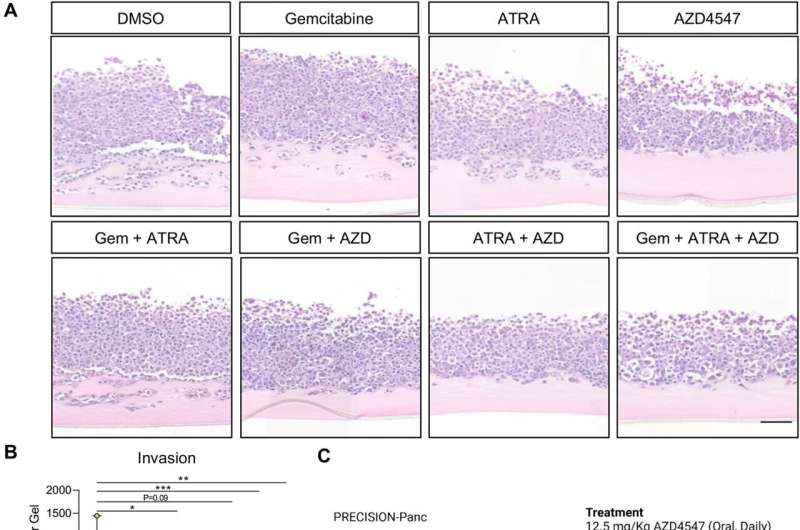 Researchers from Barts Cancer Institute at Queen Mary University of London have identified a new channel of communication through which non-cancerous cells drive the invasion of cancer cells in pancreatic cancer.

By blocking a particular signaling molecule within this pathway, called Fibroblast Growth Factor Receptor 1 (FGFR1), the team was able to reduce invasion of pancreatic cancer cells in the laboratory.

The findings, published today in Oncogene, may pave the way for the development of new treatment approaches for pancreatic cancer that target the cross-talk between cancer cells and their environment.

Silencing the communication between cancer cells and healthy cells

In this study, the researchers were interested in the role of the Fibroblast Growth Factor (FGF) signaling pathway. This pathway is important for normal tissue development in the embryo as well as wound repair, but when it is activated inappropriately it can lead to the development of many cancer types including breast and pancreatic cancer.

To interrogate FGF signaling in pancreatic cancer, the researchers created 3D models known as spheroids made up of pancreatic cancer cells and non-cancerous ‘stellate’ cells grown together in a gel that mimics the tumor’s microenvironment in the pancreas. Stellate cells help to create a dense, fibrotic layer around pancreatic tumors, known as the ‘stroma,’ which acts as a physical and chemical barrier around the tumor and limits the efficacy of cancer treatments.

By fluorescently staining the cells in the spheroids and watching them under the microscope, the team observed that the stellate cells guide the cancer cells away from the main cluster of cells, leading the invasion into the surrounding gel matrix.

When the team introduced a drug into the spheroids to block a key chemical messenger of the FGF pathway, known as FGFR1, invasion was halted. Surprisingly, the researchers found that FGFR1 was activated in the stellate cells rather than the cancerous cells, suggesting that the stellate cells are a key driver of cancer spread.

Under normal circumstances, FGFR1 sits on the surface of cells. However, in their models, the team found that FGFR1 was located in the nucleus of the stellate cells that were leading invasion.

Further investigations (using a specialized method called ChIP-Seq) revealed that once inside the nucleus, FGFR1 attaches to the cell’s DNA to upregulate the expression of a gene called NRG1. Cancer cell invasion could be reduced either by preventing FGFR1 from entering the nucleus of the stellate cells or by blocking the expression of NGR1.

Professor Richard Grose, co-lead author of the study, said, “Our findings highlight, for the first time, that nuclear FGFR1 in stellate cells drives pancreatic cancer invasion by upregulating NGR1, and that there may be multiple ways to target the FGF signaling pathway to slow down cancer spread.”

The team investigated whether FGFR1 drug inhibitors could be used in combination with other pancreatic cancer treatments to prevent cancer cell invasion.

They treated 3D cellular models with a drug that blocks FGFR1 alongside a standard-of-care chemotherapy (gemcitabine) and an experimental drug currently being tested in pancreatic cancer clinical trials (ATRA). Although treatment with the FGFR1 inhibitor, either alone or in combination with the other drugs, did not kill the cancer cells, there was a significant reduction in invasion.

The team conducted initial tests using the same three drugs in a mouse model of pancreatic cancer. This preliminary investigation showed a decrease in local invasion of the tumors into the pancreas following treatment with the combination therapy.

Dr. Abigail Coetzee, joint first author of the study with Dr. Edward Carter, said, “While this approach could help in slowing down the spread of cancer cells, since it isn’t toxic to the cancer, it couldn’t be used as a treatment on its own. This was why we tested it alongside a chemotherapy. Our initial results were definitely encouraging, but more work needs to be done before this could move forward to a clinical trial.”

Professor Hemant Kocher, co-lead author of the study, added, “The only curative treatment for pancreatic cancer is surgery, however local invasion of pancreatic cancer cells into blood vessels and surrounding tissues makes it difficult to remove the tumor. Finding ways to halt cancer invasion and spread is vital for improving outcomes for patients.”

The team will now work to expand their research into larger pre-clinical studies with mouse models, to determine if this work could be translated into clinical trials.