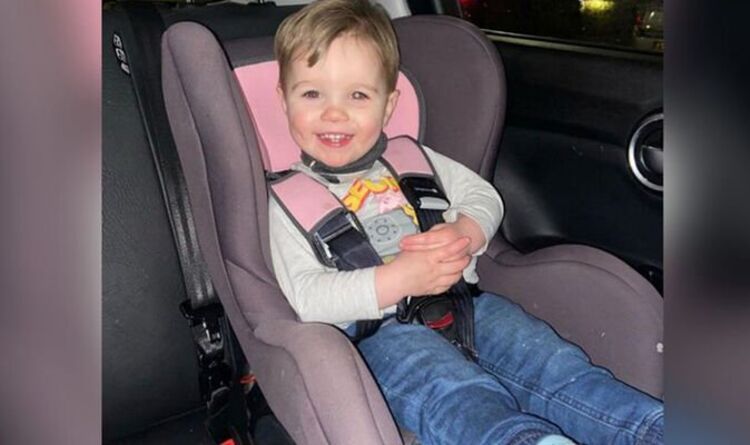 Leonnie Ord started to notice a glow over her one-year-old’s left pupil in August last year. The glint, however, would come and go. “I kind of put it down to a light reflection,” the mum-of-two explained. “[When] we moved to a house, which had a lot more light, I started noticing it more,” Leonnie, tenuate weight loss stories 33, said.

“It was a white glow over all his pupil, it was as if he had a cat’s eye.

“When it started becoming more prominent, and I was looking down at him, I could see this white looking back at me, which now I know is the tumour in his eye.”

The NHS pointed out that the eye condition tends to affect children under the age of five.

READ MORE: Cancer – There are 400 new cases of male breast cancer each year in the UK

When picked up in the earliest of stages, retinoblastoma can often be successfully treated.

If the tumour affects both eyes, it’s usually diagnosed before a child is one years old.

However, if only one eye is affected (like Cillian), then the average diagnosis usually takes place between the ages of two to three.

“One of the signs of retinoblastoma is an unusual white reflection in the pupil of the eye,” the NHS noted, which can sometimes be picked up in photographs.

The NHS elaborated: “It often looks like a cat’s eye that’s reflecting light.

“[It] may be apparent in photos where only the healthy eye appears red from the flash.”

There may be a squint, a change in the colour of the iris, or a red and inflamed eye.

Some children may experience poor vision, so they are unlikely to focus on faces or objects.

For Leonnie and her fiancé, Gary, they learned that little Cillan had lost his vision.

He is now undergoing targeted chemotherapy, showing advances in treatment, as Leonnie was told that if this case occurred five years ago, surgeons would have removed Cillian’s eye.

Leonnie is now urging other parents to seek medical advice if they notice “anything different with your child’s eye”.

“If you notice something with your friend’s child’s eye or if you see a photo on Facebook, don’t be frightened to alert that parent,” she said.

“As a parent you would rather be scared for a week waiting for an appointment than it being too late and your child losing their eye or sight, or the cancer has spread.”

Leonnie added: “Every change in the eye doesn’t mean that it could be cancer.

“But if we’d spotted and got Cillian checked sooner he could have potentially still had his sight in his left eye, we just don’t know.”

The family have set up a JustGiving page to raise funds for the Childhood Eye Cancer Trust.