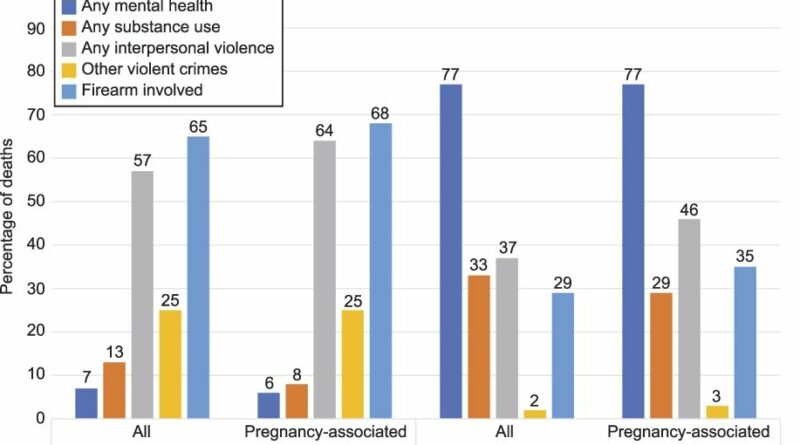 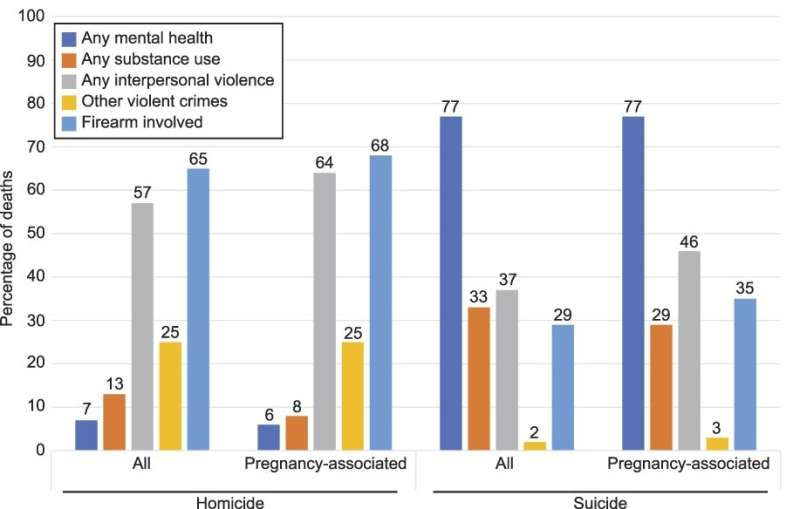 Maternal mortality in the United States in on the rise. Scientists increasingly recognize that pregnancy-associated deaths—those due to conditions unrelated to the physiologic effects of pregnancy—are important and potentially preventable contributors to maternal mortality. Maternal deaths due to homicide and suicide are thought to represent a significant number of pregnancy-associated deaths, but have been under explored as an area of potential intervention.

A new study led by researchers at Beth Israel Deaconess Medical Center (BIDMC) identifies risk factors for pregnancy-associated violent deaths, emphasizes that every such death should be considered preventable and highlights opportunities for intervention. The scientists found that among homicides and suicides, they were more likely to occur during pregnancy and the postpartum period, and that pregnancy-associated homicide and suicide are commonly preceded by mental health problems, substance use disorders (SUD), or intimate partner violence. The team’s findings appear in Obstetrics & Gynecology.

“These deaths can absolutely be prevented,” said corresponding author Anna Modest, Ph.D., cymbalta creatinine MPH, director of Clinical Research Education in the Department of Obstetrics and Gynecology at BIDMC and assistant professor of obstetrics, gynecology & reproductive biology at Harvard Medical School. “Certain risk factors, like mental illness and intimate partner violence, loom large. Our findings underline the urgent need for increased attention to at-risk individuals. We need expanded, evidence-based strategies and interventions for safeguarding people during and after pregnancy.”

The investigators used data from the Centers for Disease Control and Prevention’s National Violent Death Reporting System, 2008 to 2019. Among women and girls aged 15 to 44, 21% of homicides (660) and 9% of suicides (640) were associated with pregnancy—a total of 1,300 reported deaths. The risk of violent death was highest during pregnancy or the late postpartum period (43 days to one year after giving birth). Firearms were used in two out of three homicides and one in three suicides. Among deaths in which circumstances were known, intimate partner violence—a broad range of violent and coercive behaviors—was a substantial factor in 57% of homicides and 37% of suicides.

Non-Hispanic Black women were disproportionately victims of pregnancy-associated homicide. The homicide victims were likely to be single and relatively young with limited education—a population also at particularly high risk of being harmed by restrictions on abortion care.

“As clinicians across the country navigate environments in which patients are no longer able to make decisions regarding their own pregnancies, there is an especially vulnerable group whose lives and well-being are at risk,” said senior author Naima T. Joseph, MD, MPH, maternal-fetal medicine physician at Beth Israel Deaconess Medical Center and an instructor of obstetrics, gynecology & reproductive biology at Harvard Medical School. “It is important that clinicians caring for pregnant persons assess and address risks such as mental health, substance use, and intimate partner violence in the clinical setting in addition to advocating for policies that make childbearing safe.”

Pregnancy-associated suicide was more prevalent among those who were non-Hispanic White, married or partnered, with some college education. Most suicide victims had a diagnosed mental health condition or SUD, and/or a history of attempted suicide for which they were currently or previously receiving treatment.