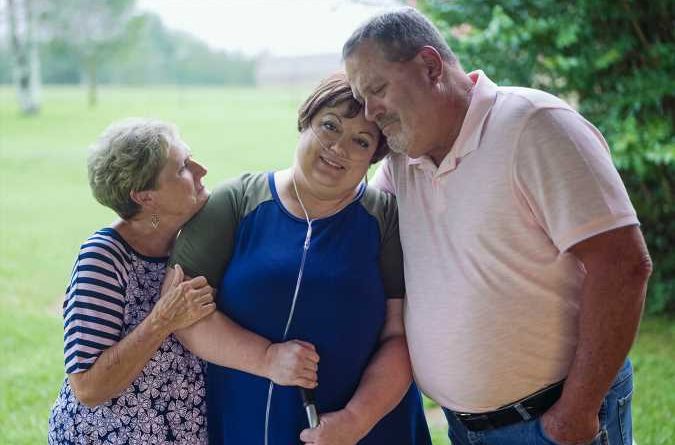 The weeks of fear and uncertainty that Pam and Paul Alexander suffered as their adult daughter struggled against COVID-19 etched itself into the very roots of their hair, leaving behind bald patches by the time she left the hospital in early May.

Tisha Holt had been transferred by ambulance from a smaller hospital outside Nashville, Tennessee, nexium kidney disease to Vanderbilt University Medical Center on April 14, when her breathing suddenly worsened and doctors suspected COVID-19. Within several days her diagnosis had been confirmed, her oxygen levels were dropping, and breathing had become so excruciating that it felt like her “lungs were wrapped in barbed wire,” as Tisha describes it.

Vanderbilt doctors put the 42-year-old on a mechanical ventilator, and the next few weeks passed in a blur for her parents, who waited helplessly for the next update about the eldest of their three children.

“That’s when it got really, really bad,” Pam said. “We were not allowed to see her, to go, to talk to her — not anything. I would call. And I might get somebody, and then again I might not.” Later that first week after Tisha arrived at Vanderbilt, Pam reached a nurse. “She said, ‘Ms. Alexander, in all probability your daughter will die today.’ Me and my husband both, we just cried and cried.”

It “was probably more than likely the worst day of my life when the nurse told us that,” Paul said. “She was our first baby, and the first person that I’ve held that was part of me.”

The number of Americans hospitalized with the virus is increasing again, reaching 41,000 late last week, many with a circle of loved ones holding vigil in their minds, even if they can’t sit at the bedside. A decade ago, critical care clinicians coined the term post-intensive care syndrome, or PICS. It describes the muscle weakness, cognitive changes, anxiety and other physical and mental symptoms that some ICU patients cope with after leaving the hospital. Those complications are fallout from the medications, immobility and other possible components of being critically ill. Now they worry that some family members of critically ill COVID patients may develop a related syndrome, PICS-Family.

Studies show that about one-fourth of family members, and sometimes more, experience at least one symptom of PICS-Family, including anxiety, depression, post-traumatic stress disorder or “complicated grief” — grief that is persistent and disabling — when their loved one has been hospitalized, according to a 2012 review article published in the journal Critical Care Medicine. Dr. Daniela Lamas, a critical care physician at Boston’s Brigham and Women’s Hospital, believes relatives and friends of coronavirus patients may be particularly vulnerable.

Hospital rules designed to prevent the spread of the virus have robbed them of the opportunity to sit with their loved ones, watching clinicians provide medical care and gradually processing what’s happening between physician updates, Lamas said. In pre-pandemic times, a nurse “would explain what they had heard [from the doctor] and help them come to terms with unacceptable realities,” she said.

The Alexanders could reach a doctor or nurse on most days. But not always, said Pam, acknowledging that “they had a lot to do.” Pam described trying to cope minute to minute, day to day, waiting for the next report from the hospital, wandering from room to room. “You just walk around sort of in a daze. You can’t think about anything else but that.”

Paul struggled with feelings of depression, often retreating to his workshop. “I wouldn’t do anything but sit there and cry, wouldn’t work on nothing, just sit there with my head in my hands.”

Meanwhile, they had become temporary parents to their grandsons, two teenagers who had homework and laundry and kept asking about their mom. Pam tried to shield them as much as possible. “There are a lot of things I just didn’t tell them until it got really bad,” she said.

Being physically cut off from their daughter was the hardest, Pam and Paul said. “I don’t care if I had to put on 40 layers of clothes,” Pam said. “Just to have gotten to go in and touch her and see her would have made a huge difference.”

Even though family members are typically barred from visiting during the pandemic, they can wrestle with guilt that they let a loved one down in his or her time of need, said Jim Jackson, a psychologist and assistant director at Vanderbilt’s ICU Recovery Center.

Without any visual sense of what’s going on, “people often move to worst-case scenarios; they move to catastrophic thinking,” he said. “And why wouldn’t they, because it’s already a hugely serious situation, right? It’s a five-alarm fire and they’re not able to be engaged.” 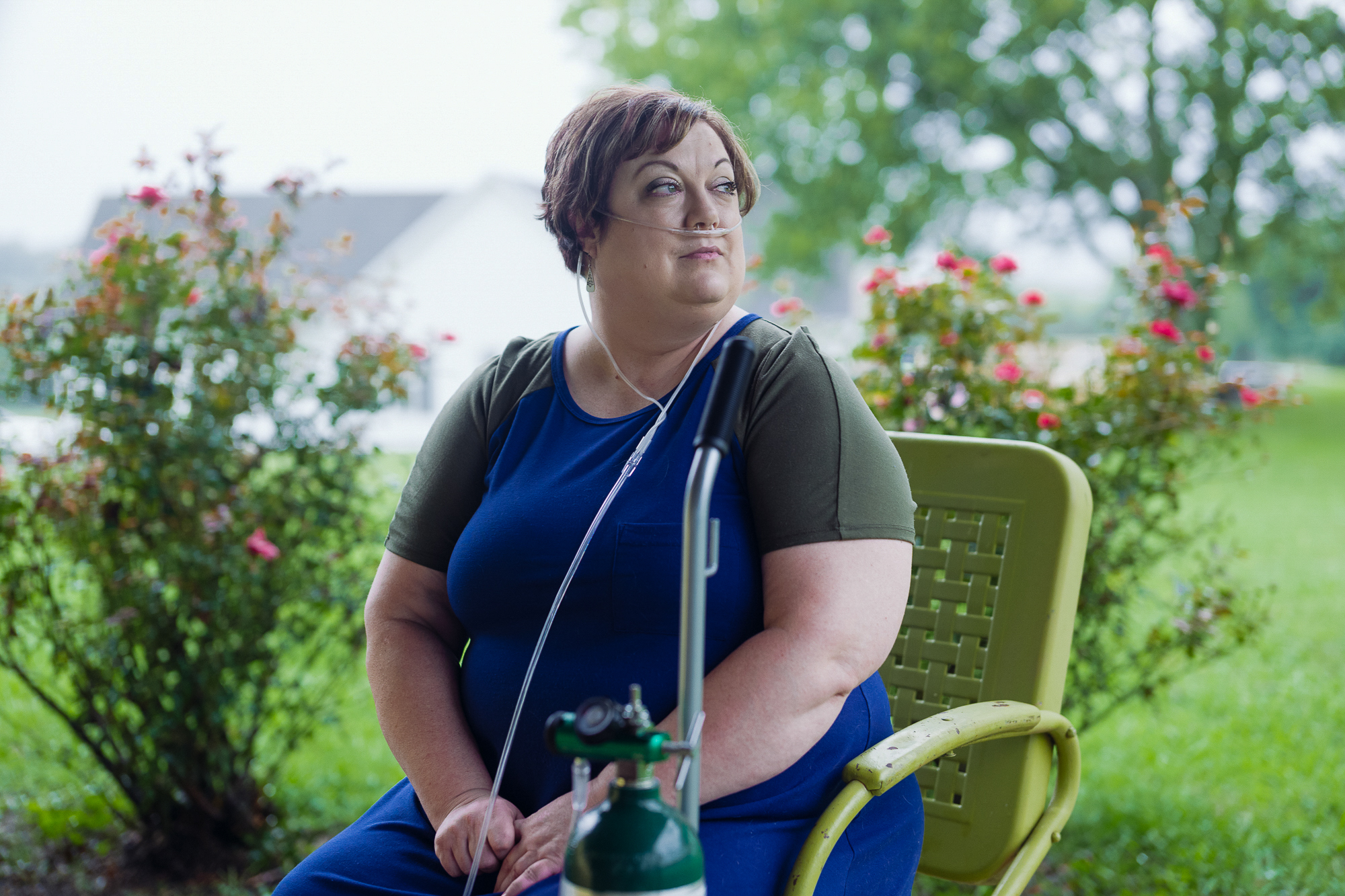 Tisha Holt is recuperating at home after several weeks of hospitalization for COVID-19. She can breathe only from the top of her lungs and needs supplemental oxygen round-the-clock. (Abigail Bobo for KHN) 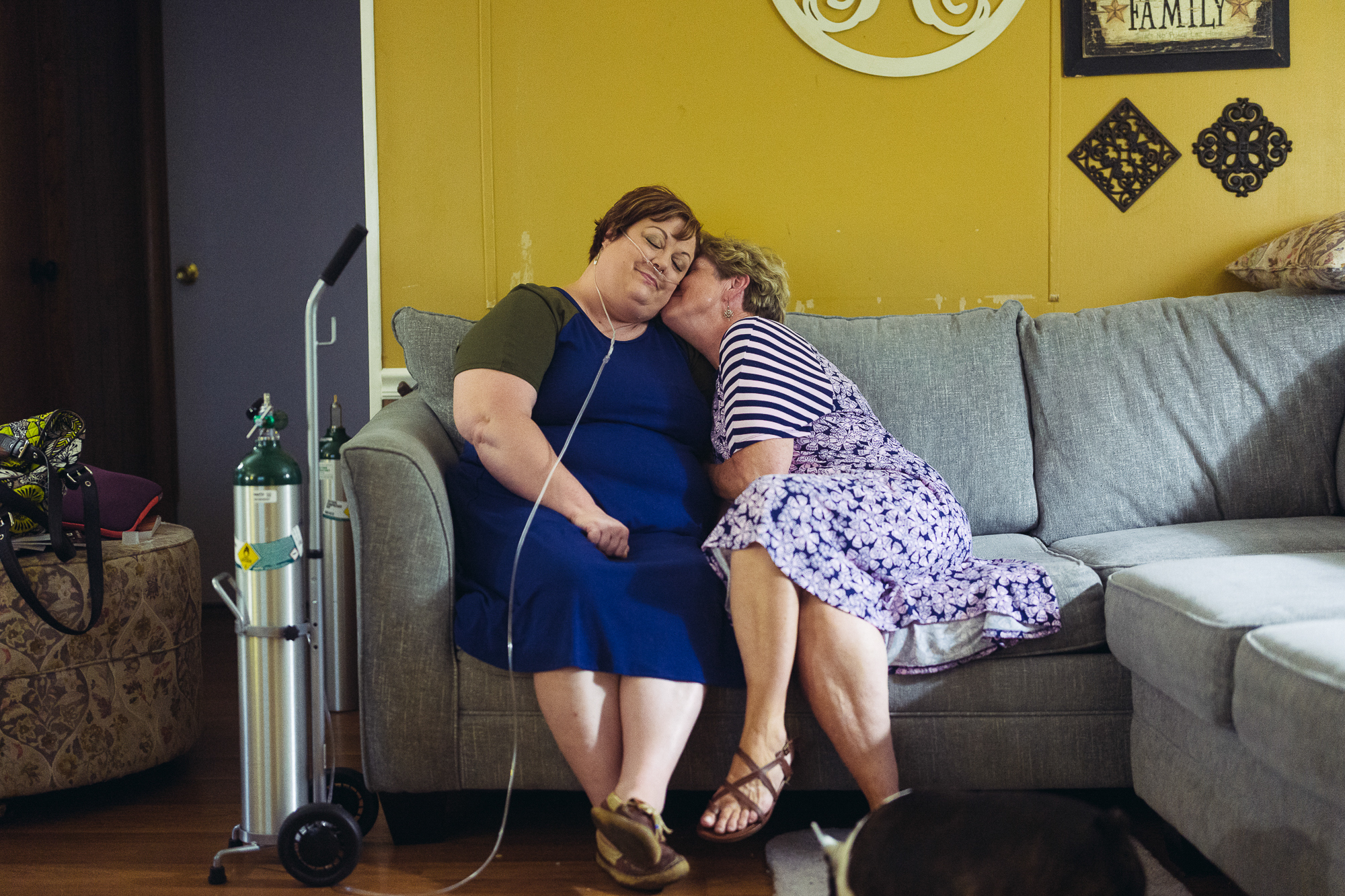 Being physically cut off from daughter Tish while she was in the hospital was the hardest, says Pam Alexander: “We were not allowed to see her, to go, to talk to her, not anything. I would call. And I might get somebody, and then again I might not.” (Abigail Bobo for KHN)

Doctors and nurses can ease the strain on loved ones by updating a designated family member at least once a day, said Judy Davidson, a nurse scientist at the University of California-San Diego and an author of the 2012 Critical Care Medicine review article. Arrange video calls, she suggested, so the family can see their loved one and better picture the room, clinicians and broader hospital environment.

“If we don’t protect them and keep them strong while the person is in the ICU,” Davidson said, “they won’t be strong enough to do the caregiving that’s necessary once the person comes home.”

After a patient does return home, family members may shy away from discussing what they have been through, so as not to burden their still recovering loved one, Jackson said. The ICU survivor may remain silent for similar reasons, he said.

“What tends to happen is they both sort of passively agree not to talk about the elephant in the room, when that’s exactly the best thing to do,” Jackson said.

Tisha — who finally left the hospital May 3 — was stunned by her parents’ appearance the first time she saw them. “They both looked exhausted and I was shocked at the amount of hair that they’d lost,” she wrote in an email. Treatment and damaged lungs have made it difficult for her to talk by phone.

Since then, her parents’ bald spots have begun to fill in, but they haven’t released their worry. Tisha can breathe from only the top of her lungs and needs 24-hour oxygen, Pam said. She’s not strong enough to return to work as a nurse, a job she loved. She no longer has health insurance and can’t afford even the cheapest plan on the Affordable Care Act exchanges. To this day, Tisha doesn’t know where she contracted the virus.

Her parents spend virtually all waking hours at Tisha’s home, about a 10-minute drive from their house, and check on her a few times daily, sometimes more often if she’s feeling poorly, Pam said. “I think, ‘Am I going to come over here and she’s going to be dead from her heart not working?’ It scares me to death because she has bad days and good days.”

Tisha keeps her cellphone handy in case they text or call. “If they call and I don’t answer, it sends them into a panic and they are apt to drive over here to make sure everything is alright,” she wrote.

She’s been attending a virtual ICU survivors support group at Vanderbilt that Jackson helps lead. It’s open to relatives, but Pam was unsure she could handle hearing others’ painful stories as she’s still processing her own. “I don’t mind talking to you about it,” she said, “but sometimes talking about it just sort of gets you in a funk.”

Their church community has provided solace, calling when Tisha was in the hospital and leaving food on the porch. Pam and Paul credit a myriad of prayers from loved ones near and far with bringing their daughter home. “Even the doctors, they really didn’t know why she was still here either, to be honest with you,” Paul said.

He hasn’t stopped fretting about his eldest child. “I still can’t turn it off — it hasn’t turned off,” Paul said. “But every day is a blessing, though.”