Home » Politics » ‘A Failed System’: What It’s Like to Vote With a Disability During a Pandemic

Sheryl Grossman voted in Maryland’s primary this year by taping a blank mail-in ballot to her door, alongside a list of her choices.

As she watched through the window of her home in Baltimore, two election officials filled out the ballot, texted her a photo and sealed the envelope. The director of the local board of elections texted her later to confirm that the officials had returned it.

“It was not an independent, private ballot,” said Ms. Grossman, 44, the board chairwoman of the Jewish disability advocacy group Yad HaChazakah. “But if that was not an option, I would not have been able to cast a ballot at all.”

The accommodations were necessary, and will be again in the general election, because Ms. Grossman has Bloom syndrome, a genetic disorder that weakens her immune system and causes cognitive disabilities. Because of the coronavirus pandemic, she can’t safely go to a polling place or allow anyone into her home. And because she can’t read text with formatting, like italics or borders, she can’t complete a mail-in ballot.

Her experience is a product of an electoral system in which, even before the pandemic, it was often hard for people with disabilities to participate. With the virus in the equation, it can be next to impossible.

The number of Americans at risk of disenfranchisement is huge: According to new projections from researchers at Rutgers University, more than 38 million eligible voters have disabilities. That’s more than 16 percent of the electorate.

This total — nearly that of the entire population of California — includes an estimated 21.3 million eligible voters with mobility disabilities, 13.1 million with cognitive disabilities, 11.6 million with hearing disabilities and seven million with visual disabilities. (Many voters fall into multiple categories.) The disenfranchisement of even a small fraction could swing the election.

“Democracy only works if everyone is able to participate and vote,” said Lisa Schur, a professor at Rutgers University who conducted the research with her husband, Douglas Kruse, who is also a professor. “And to the extent people with disabilities are excluded from the process, then we really have a failed system.”

Most accessibility discussions this year have centered on expanding mail-in voting, and that does make a difference: Dr. Schur said research showed higher turnout among people with disabilities when states allowed no-excuse absentee voting. She and Dr. Kruse are voting by mail themselves because Dr. Kruse has reduced lung function as a result of a spinal cord injury, putting him at high risk for the coronavirus.

But mail-in voting alone won’t allow everyone with a disability to vote.

Joanne Wolf, 64, of Cincinnati, missed an election for the first time she could remember because she couldn’t find an accessible way to vote in the Ohio primary. She has multiple sclerosis and didn’t feel safe voting in person, as she normally does, during the pandemic. But she can’t write by hand or sign an absentee ballot — when she completed one several years ago using a signature stamp, it was rejected.

Asked about Ms. Wolf’s situation, a spokeswoman for the Ohio secretary of state said a signature stamp was permissible for people whose disabilities required it. After The New York Times told her this, Ms. Wolf submitted a ballot request to the Hamilton County Board of Elections using her stamp and was again rejected. 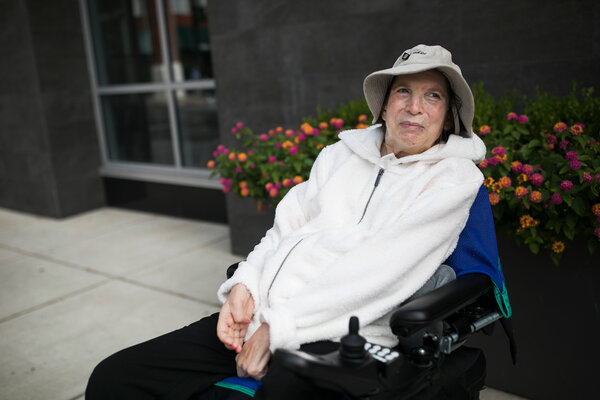 Her husband, Trip Wolf, contacted the board of elections on her behalf and was told the stamp did not match Ms. Wolf’s signature from the last time she voted in person. The board said it would send her a form to update her signature using the stamp, and she is hopeful that she will be able to vote after that.

But not everyone in a similar situation will have the time or ability to resolve the problem.

The obstacles created by the coronavirus are piling on top of the ones voters with disabilities already face, including polling sites that, in violation of the Americans with Disabilities Act, are inaccessible to people who use wheelchairs or have other mobility difficulties.

Xian Horn, who has cerebral palsy, recalled finding the wheelchair-accessible entrance of her polling place in New York City blocked by trash cans. It is often simpler, she said, to have her mother help her up the stairs of the main entrance.

Emily Ladau — a writer and disability rights activist who has Larsen syndrome, which affects bone development — recalled finding the accessible entrance of her polling place in West Babylon, N.Y., locked. Her father went in through the main entrance and asked a poll worker to open the door.

“They said it was locked for security reasons, but you can’t both lock something for security reasons and call it the accessible entrance,” Ms. Ladau, 29, said. “Small things like this add up and send a message that people who are working the polls don’t really care about giving people with disabilities the same kind of access as nondisabled voters.”

The barriers don’t stop at the door. Polling sites are required to have accessible voting machines — for instance, ones that can read text aloud for people with visual disabilities — but several voters recalled showing up for past elections and being told that the only accessible machine was broken, or that poll workers didn’t know how to operate it.

Stacy Cervenka and her husband, who live in Lincoln, Neb., are blind and normally vote in person using accessible machines. But Ms. Cervenka, 40, said they were hesitant this year because their son has a metabolic disorder that puts him at high risk for Covid-19. And because they only recently moved to Nebraska, they don’t have family or friends nearby to help them complete mail-in ballots.

“There really is no great option,” Ms. Cervenka said. “We want to be able to vote in person as much as anyone else, but we want it to be safe. It’s really going to depend where the numbers are in November if we do that, and if not, we’re going to have to find a trusted person who we feel comfortable reading us all the ballot measures and marking them correctly.”

Historically, disability rights were a bipartisan issue. The Americans with Disabilities Act was introduced by Senator Tom Harkin of Iowa, a Democrat, and signed into law by President George H.W. Bush, a Republican, in 1990. But recent discussions of disability policy have come overwhelmingly from Democrats.

During the presidential primary, more than 10 Democratic candidates released disability-related plans, many of them more sweeping than anything proposed in previous campaigns. (President Trump has not published such a plan.) Several advocates said that surge in attention had made the obstacles to voting this year harder to swallow.

Rebecca Cokley, director of the Disability Justice Initiative at the Center for American Progress, said it had been thrilling to see Democrats engage with people with disabilities on Twitter and include them in the process of writing policies, and to watch candidates like Elizabeth Warren and Julián Castro turn broad debate questions into ones specific to the disability community.

“This was a pipe dream,” Ms. Cokley said. “We felt like Cinderella at the damn ball.”

But now, leaders in the disability community are responding to manipulated videos that exploit disabled people’s means of communication — like one shared by Representative Steve Scalise, Republican of Louisiana, that puts words in the mouth of the activist Ady Barkan, who has A.L.S. and uses assistive technology to speak. They are watching Mr. Trump and Joseph R. Biden Jr., the Democratic nominee for president, insult each other over who is more physically fit. And they are trying to get disabled people to vote by any means necessary, but safely, during a pandemic.

But Mr. Biden’s campaign described more robust outreach to people with disabilities than Mr. Trump’s did.

Mr. Biden’s disability engagement director, Molly Doris-Pierce, is working with the Democratic National Committee and local groups to gather and publicize state-by-state information about voting accessibility. The campaign has also been holding virtual discussions with members of different parts of the disability community, like people with chronic illnesses and people disabled because of gun violence.

Part of the goal is to show people with disabilities “that the campaign and the vice president know that all policy issues are disability policy issues,” Ms. Doris-Pierce said.

Thea McDonald, a spokeswoman for Mr. Trump’s campaign, expressed support for voters with disabilities but did not describe specific efforts to reach out to them.

“President Trump and his team are fighting for every eligible voter to have their vote count, and that unequivocally includes Americans with disabilities,” Ms. McDonald said, citing a primary voter with cerebral palsy whose signature stamp was rejected in Maine and whose ballot Republicans pushed to count. (Republicans in some states are pushing to reject mail-in ballots based on signature mismatches, and the president has claimed falsely that mail voting is prone to widespread fraud.)

Voters and advocates expressed frustration that, even in 2020, they did not have more technologically advanced options than voting in person or by mail.

“It blows my mind that we’re still having the security versus accessibility debate on voting — I mean, the A.D.A. is 30, I would’ve thought we would have figured it out by now,” Ms. Cokley said. “The internet’s middle-aged. How can we eventually get to the point where people with disabilities can vote by any number of different mechanisms, by the mechanisms that work best for them?”

Ms. Cervenka, the Nebraska voter, said she wished she could vote through a secure app or online portal. Ms. Grossman, from Maryland, said she would like to vote securely by phone, pressing numbers for different candidates.

“That would be private, independent and accessible for me,” she said. “I dream of the day when I can do that. I could actually do my own, independent ballot for the first time in my life.”

President Trump declined for a second day to commit to a peaceful transfer of power if he lost the election, while Republicans, including Mitch McConnell, implicitly rebuffed him, promising an “orderly transition.”

Early voting for the presidential election starts in September in some states. Take a look at key dates where you live. If you’re voting by mail, it’s risky to procrastinate.