Mark Esper’s strained relationship with President Trump, since he balked at using active-duty troops to quell civil unrest, may result in Mr. Trump choosing his fourth defense secretary if he keeps the White House. 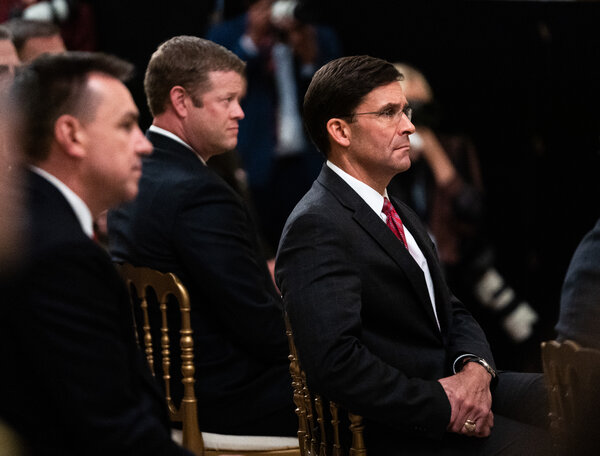 By Helene Cooper and Eric Schmitt

WASHINGTON — Throughout the long corridors of the Pentagon, Defense Secretary Mark T. Esper is widely seen as a dead man walking.

There is a broad consensus that if President Trump defies the polls and wins re-election, the president has so belittled his defense secretary, referring to him at “Yesper” and deriding him both publicly and privately, that a new defense secretary soon would be sitting in the prestigious outer ring of the Pentagon’s third floor.

Asked if he has considered firing Mr. Esper, who took over the post in July 2019, Mr. Trump told reporters at a White House news conference in August: “I consider firing everybody. At some point, that’s what happens.”

Current polling favors former Vice President Joseph R. Biden Jr., but the sunset of the Trump administration is hardly a foregone conclusion. If Mr. Trump is re-elected and fires Mr. Esper, the president will be looking for his fourth defense secretary.

To be sure, senior officials in the waning months of any administration always scramble to position themselves to move up if their bosses win or move on to corporate or think-tank life if they lose.

But in the case of Mr. Esper, a looming departure feels more assured, even when measured by an administration where officials have come and gone at a brisk pace.

Air Force Secretary Barbara M. Barrett is also mentioned as a possible successor. And if either Senator Martha McSally of Arizona or Senator Joni Ernst of Iowa, both Republicans and military veterans, lose their tightly contested campaigns, one of them could land in the Pentagon’s top job.

And there is always chatter that Secretary of State Mike Pompeo, a West Point graduate and former tank commander who peppers his conversations with military terms like “mission set” and calls American diplomats “warriors,” could slide over to take the helm of the Pentagons.

They all would be cognizant that Mr. Trump’s defense secretaries have had a short half-life. 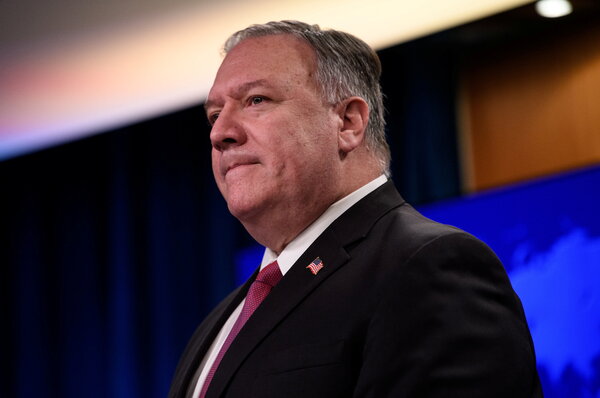 Mr. Trump’s reference to Mr. Esper as “Mr. Yesper” is ironic by itself, since it was the defense secretary’s public break with the president in a June 3 news conference in which he spoke against use of active-duty American troops to quell civil unrest that infuriated Mr. Trump to begin with. Mr. Esper’s surprise break with the president came after he had accompanied Mr. Trump on his famous walk across Lafayette Square outside the White House, where protesters had just been tear-gassed, sparking condemnation from former military and civilian Defense Department officials.

Deploying active-duty troops in a domestic law enforcement role, Mr. Esper said at the Pentagon news conference, “should only be used as a matter of last resort and only in the most urgent and dire of situations.”

In seeking to right the ship by publicly distancing himself from the president’s expressed desire to invoke the Insurrection Act to deploy troops in America’s cities, Mr. Esper practically signed his own walking papers. Senior administration officials talked Mr. Trump out of firing Mr. Esper then, but both White House and Defense Department officials say that Mr. Esper’s stay of execution is good only through Election Day.

The defense secretary is hardly the only senior member of the Trump administration to come under fire from their boss. In recent weeks, the president said Attorney General William P. Barr would be responsible for “a very sad, sad situation” if he did not indict Democrats like Mr. Biden and former President Barack Obama. Mr. Trump castigated Christopher A. Wray, the F.B.I. director., saying, “He’s been disappointing.” And the president even criticized Mr. Pompeo for not releasing Hillary Clinton’s emails — although the State Department has made public a large number of those messages in redacted form.

But, among them, Mr. Esper already appears to be looking for a soft landing. An article earlier this month on the wonky Defense One news site reads like a post on a dating app, listing Mr. Esper’s sterling qualities and accomplishments as he “valiantly” battled a sprawling, entrenched bureaucracy and tried to drag it into a fast-moving world.

The defense secretary “has accomplished much of what he set out to do behind the scenes and without much fanfare,” said the article, written by a fellow at a conservative Washington think tank. The essay went on to extol Mr. Esper’s “serious efforts to better align dollars with strategy” and his moves to put “like-minded thinkers in charge.”

“While all of this was going on,” the article concludes, Mr. Esper “oversaw the standing up of a new military service in the Space Force and managed a global pandemic response operation by the Defense Department involving more than 60,000 uniformed and civilian personnel during the same time as U.S. service members were ‘serving in more than 100 nations deterring enemies, reassuring allies and building capabilities.’”

Inside the Pentagon, the article landed with all the force of a dud bomb. One Defense Department official likened it to a job application, part of an effort to help Mr. Esper find suitable post-government employment should his boss fire him, as the president has told aides he would like to do.

“Throughout his career in uniform and as a civilian leader, Secretary Esper has always been and remains committed to doing what is best for the military and the nation,” Jonathan Hoffman, Mr. Esper’s spokesman, said in an email when asked to comment for this article.

On the single biggest issue of 2020 — the coronavirus pandemic — history may show that Mr. Esper has, by far, outperformed his boss, who largely refused to wear a mask and contracted coronavirus during the White House outbreak. Mr. Esper, by contrast, has strictly adhered to Centers for Disease Control guidelines on wearing masks when not able to keep a recommended social distance.

At a recent Pentagon virtual town-hall-style meeting, Mr. Esper responded to a sailor on the aircraft carrier Gerald R. Ford, who complained the required social distancing onboard the ship was hurting morale.

“It is tedious — I understand that,” Mr. Esper said. “But I think it’s showing, in terms of the Navy’s results in terms of infection rates, that they’re doing a very good job.”

Since the pandemic began, eight active-duty troops have died from Covid-19 out of a total troop population of more than 1.2 million

But since the fateful events of early June, Mr. Esper has flown under the radar, avoiding the media and keeping a low profile to prevent being pulled into election politics. So the Defense One article on his accomplishments, written by American Enterprise Institute resident fellow Mackenzie Eaglen, stood out. But while the piece raised eyebrows inside the Pentagon, official Washington reacted with a shrug.

“It’s kind of a Beltway rite of passage for soon-to-be ex-officials to get their various fans on the outside to write glowing reviews of all of the ‘great’ things they’ve done just as the needle is about to drop for the next round of musical chairs in D.C.,” said Brian Katulis, a senior fellow at the Center for American Progress. “It happens like clockwork as the sun starts to set for every administration — I could point you to the pieces in the last years of the Obama and Bush administrations.”

Whatever the case, aides to the president say a second Trump term almost certainly would not include Mr. Esper. Two Pentagon officials said that is fine with Mr. Esper, a West Point classmate of Mr. Pompeo who once served in the 101st Airborne Division before becoming a top congressional aide and then a lobbyist for the military contractor Raytheon.

Mr. Esper, 56, replaced Jim Mattis, who resigned in December 2018 during a dispute over pulling American troops out of Syria. Patrick M. Shanahan, Mr. Trump’s original pick to replace Mr. Mattis, abruptly resigned as acting secretary in June 2019 before his Senate confirmation hearing was even scheduled, after news reports revealed details of his 2011 divorce.

Mr. Esper has been traveling constantly since early summer and he leaves next week for a trip to India.

Mr. Esper hasn’t spoken to the traveling news media on his past several trips, which is highly unusual. When he has spoken publicly, it’s often been in prerecorded remarks, on safe subjects (bashing China and Russia on a recent Africa trip) or in friendly venues (a question-and-answer session on military readiness at the Heritage Foundation, where Mr. Esper served as chief of staff earlier in his career).

“Together we continue to counter the malign, coercive and predatory behavior of Beijing and Moscow, meant to undermine African institutions, erode national sovereignty, create instability, and exploit resources throughout the region,” Mr. Esper said during a speech at the American Battle Monuments Cemetery in Tunisia last month.

Friends and colleagues say Mr. Esper has dealt with a mercurial commander in chief and the turmoil of the Trump administration as well as could be expected.

“I’d say he played a fundamentally weak hand of cards — an erratic president, election-year tension and politicization of the department, and a rotating cast of characters on his team over which the WH exerted full authority — pretty well,” said James G. Stavridis, a retired four-star admiral and former Supreme Allied Commander for Europe, in an email. “He’s trying hard to stay off the ridgeline, but it’s hard with a president 100 percent focused on winning re-election no matter the damage to policy and international security, from Iraq to Afghanistan to the Korean Peninsula.”

Mr. Esper “knows his days are numbered, either by his own hand or others,” said Raymond F. DuBois, a former senior Army and Defense Department official in the George W. Bush administration, who has known Mr. Esper for nearly two decades. “Therefore there is little utility in being anything other than the ‘quiet’ secretary.”