Home » Politics » All in or All Out? Biden Saw No Middle Ground in Afghanistan.

President Biden’s reductionist formula has prompted a debate over whether the mayhem in Kabul was inevitable or the result of a failure to consider other options. 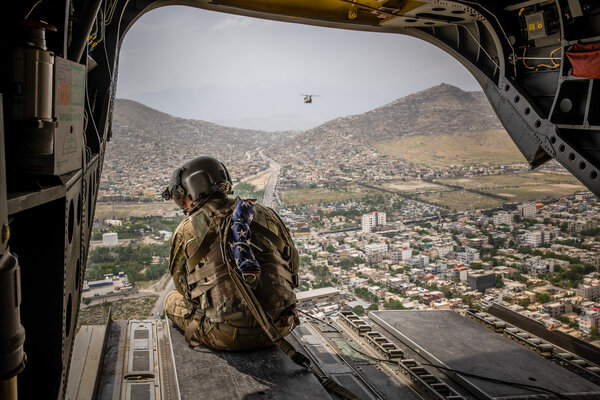 As the American military withdrawal from Afghanistan capping an ill-fated 20-year war turned uglier and deadlier in recent days, President Biden has stood by his decision but at the same time repeatedly singled out one person in particular to blame: his predecessor.

Because President Donald J. Trump struck an agreement with the Taliban last year to pull out, Mr. Biden has insisted that he had no choice but to abide by the deal he inherited or send tens of thousands of American troops back to Afghanistan to risk their lives in a “forever war.” It was, in other words, all in or all out.

But that reductionist formula has prompted a profound debate over whether the mayhem in Kabul, the capital, was in fact inevitable or the result of a failure to consider other options that might have ended in a different outcome. The unusual confluence of two presidents of rival parties sharing the same goal and same approach has led to second-guessing and finger-pointing that may play out for years to come in history books yet unwritten.

In framing the decision before him as either complete withdrawal or endless escalation, Mr. Biden has been telling the public that there was in fact no choice at all because he knew that Americans had long since grown disenchanted with the Afghanistan war and favored getting out. The fact that Mr. Trump was the one to leave behind a withdrawal agreement has enabled Mr. Biden to try to share responsibility.

“There was only the cold reality of either following through on the agreement to withdraw our forces or escalating the conflict and sending thousands more American troops back into combat in Afghanistan, lurching into the third decade of conflict,” Mr. Biden said as the Taliban seized Kabul this month.

Critics consider that either disingenuous or at the very least unimaginative, arguing that there were viable alternatives, even if not especially satisfying ones, that may not have ever led to outright victory but could have avoided the disaster now unfolding in Kabul and the provinces.

“The administration is presenting the choices in a way that is, at best, incomplete,” said Meghan O’Sullivan, a deputy national security adviser under President George W. Bush who oversaw earlier stages of the Afghan war. “No one I knew was advocating the return of tens of thousands of Americans into ‘open combat’ with the Taliban.”

Instead, some, including the current military leadership of Defense Secretary Lloyd J. Austin III and Gen. Mark A. Milley, the chairman of the Joint Chiefs of Staff, asserted that keeping a relatively modest force of 3,000 to 4,500 troops along with the extensive use of drones and close air support could have enabled Afghan security forces to continue holding off the Taliban without putting Americans at much risk.

“There was an alternative that could have prevented further erosion and likely enabled us to roll back some of the Taliban gains in recent years,” said Gen. David H. Petraeus, the retired commander of American forces in Afghanistan and former C.I.A. director who argued the mission was making progress while serving alongside Mr. Biden under President Barack Obama.

“With the Afghans doing the fighting on the front lines and the U.S. providing assistance from the air,” he added, “such a force posture would have been quite sustainable in terms of the expenditure of blood and treasure.”