The silence from Representative Richard Neal of Massachussetts has some liberal Democrats worried that he could thwart the scope of their economic ambitions. 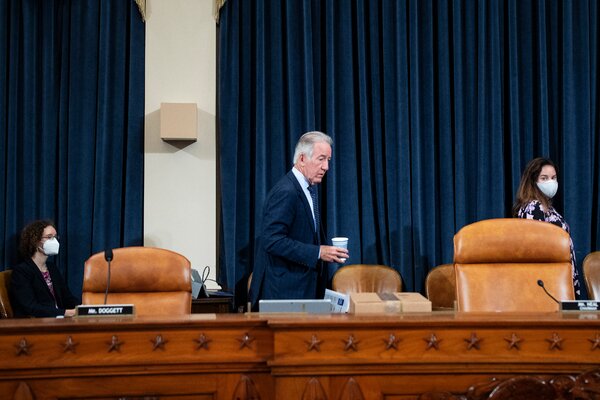 WASHINGTON — When Republicans sought to pass a giant tax cut along party lines in 2017, Representative Richard E. Neal of Massachusetts, the top Democrat on the Ways and Means Committee, led his party’s effort to brand the legislation as a tax break for the rich, helping erode public support for the bill.

Four years later, Mr. Neal is now the top tax writer in the House and on the brink of leading Democrats in advancing a $3.5 trillion spending package that is at the core of President Biden’s economic agenda. The effort, derided by Republicans, could undo parts of the 2017 law and deliver on decades of Democratic promises to force corporations and the rich to pay more.

But Mr. Neal, 72, whose committee is formally drafting legislation, remains notably enigmatic about how he will pay for the bill, which would fund paid family and medical leave, expand Medicare benefits, address climate change and expand public education. He routinely brushes off questions about his support for the kind of tax increases on businesses or the wealthiest Americans that Mr. Biden and other party leaders have proposed — leaving some liberal Democrats worried that one of their own leaders could thwart the scope of their economic ambitions.

“I’m likely to hold off on the pay-fors until we are at the altar,” Mr. Neal said in a recent interview, using shorthand for the mechanism Congress uses to pay for legislation. “The courtship can go on, then we get to the altar, and then we have to get them to say ‘I do.’”

Yet the courtship with the competing wings of his party has largely been shrouded in secrecy. His Senate counterpart, Ron Wyden of Oregon, and other liberal lawmakers have maintained a steady fanfare of suggested tax proposals, including taxing corporations that buy back stock, raising taxes on multinational corporations and carrying out changes to the estate and capital gains taxes.

Mr. Neal has spoken expansively in favor of key spending components his committee has drafted and will ultimately advance — including bolstering health care benefits, granting paid family leave and extending monthly payments to families with children. But he has yet to release the formal draft legislation outlining plans to collect revenue to pay for the bill and remains largely silent about what he will support.

That omission has not gone unnoticed in Washington. Representative Stephanie Murphy, a Florida Democrat, has so far refused to support advancing any portion of the legislation in the committee, declaring she could not assess its merits without the full text, including knowing how it would be paid for.