As the coronavirus’s Delta variant rips through conservative communities, most Republicans remain reluctant to confront vaccine misinformation and skepticism in their midst. 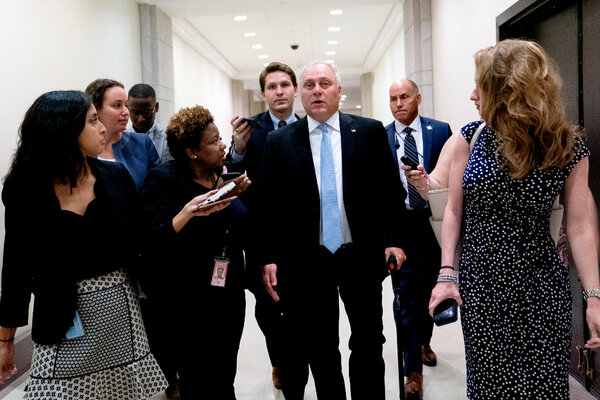 WASHINGTON — As the coronavirus surges in their states and districts, fanned by a more contagious variant exploiting paltry vaccination rates, many congressional Republicans have declined to push back against vaccine skeptics in their party who are sowing mistrust about the shots’ safety and effectiveness.

Amid a widening partisan divide over coronavirus vaccination, most Republicans have either stoked or ignored the flood of misinformation reaching their constituents and instead focused their message about the vaccine on disparaging President Biden, characterizing his drive to inoculate Americans as politically motivated and heavy-handed.

On Tuesday, Representative Steve Scalise of Louisiana, the No. 2 House Republican who said he had received his first Pfizer vaccine shot only on Sunday, blamed the hesitance on Mr. Biden and his criticism of Donald J. Trump’s vaccine drive last year. Senator Tommy Tuberville, Republican of Alabama, said skeptics would not get their shots until “this administration acknowledges the efforts of the last one.”

And Senator Roger Marshall of Kansas pointed the finger at the White House press secretary, Jen Psaki, and the director of the National Institute of Allergy and Infectious Diseases, Dr. Anthony S. Fauci.

Some elected Republicans are the ones spreading the falsehoods. Representative Jason Smith of Missouri, a Senate candidate, warned on Twitter of “KGB-style” agents knocking on the doors of unvaccinated Americans — a reference to Mr. Biden’s door-to-door vaccine outreach campaign.

Such statements, and the widespread silence by Republicans in the face of vaccine skepticism, are beginning to alarm some strategists and party leaders.

“The way to avoid getting back into the hospital is to get vaccinated,” Senator Mitch McConnell of Kentucky, the Republican leader and a polio survivor, pleaded on Tuesday, one of the few members of his party to take a different approach. “And I want to encourage everybody to do that and to ignore all of these other voices that are giving demonstrably bad advice.”

Nationally, the average of new coronavirus infections has surged nearly 200 percent in 14 days, to more than 35,000 on Monday, and deaths — a lagging number — are up 44 percent from two weeks ago. The director of the Centers for Disease Control and Prevention estimated on Tuesday that the Delta variant accounted for 83 percent of all new cases.

The political disparity in vaccine hesitancy is stark. The Kaiser Family Foundation reported at the end of June that 86 percent of Democrats had at least one shot, compared with 52 percent of Republicans. An analysis by The New York Times in April found that the least vaccinated counties in the country had one thing in common: They voted for Mr. Trump.