It was claimed the UK-based drugs giant pulled out of the meeting this evening after its chief executive hit back at the EU over claims the company is failing to deliver promised supplies in Europe. European sources say Commission officials are still demanding answers from the firm on why it has slashed the number of doses of Covid jabs due to sent to member states. Insiders claim Brussels is insisting AstraZeneca returns to talks to “give requested explanations” on the delays.

The firm is now expected to respond to the EU’s concerns in writing.

The European Commission is under fire for the hold up and is now facing mounting pressure to make its vaccines contract with AstraZeneca public.

In an interview last night, Pascal Soriot, the firm’s CEO, insisted there was no contractual commitment to supply a set number of doses to the EU. 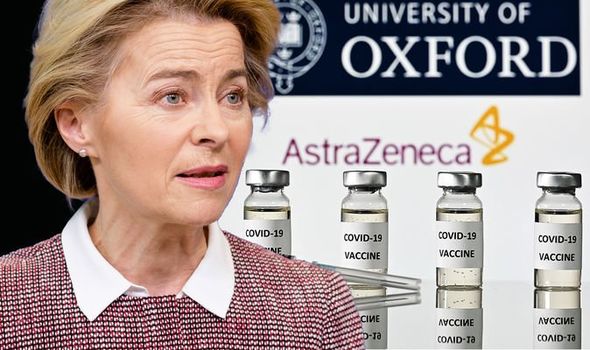 He instead claimed there was only a “best effort” clause in the agreement.

Mr Soriot told Italian newspaper La Repubblica: “It’s not a commitment we have to Europe – it’s a best effort. Europe wanted to be supplied more or less at the same time as the UK even though the contract was signed three months later.

“We said we’re going to try, but we cannot commit contractually because we’re three months behind.”

German MEP Bernd Lange, chair of the EU Parliament’s influential trade committee, called for the EU to publish its contracts with Astrazenca in order to end the blame game.

He said: “Instead of blaming each other in the media, just make the contract public.

“Since the vaccine is supposedly non-profit – what’s the problem?”

The European Ombudsman has opened an inquiry into the Commission’s refusal to publish its “advance purchase agreements” for future supplies of Covid jabs.

A statement said: “The complainant sought public access to an ‘advance purchase agreement’ concluded between the European Commission and a pharmaceutical company for the future purchase of a COVID-19 vaccine.

“The Commission initially refused to give public access, invoking an exception under the EU’s rules on public access to documents and citing the need to protect the commercial interests of the pharmaceutical company concerned.

“The Commission then failed to reply to the complainant’s request that it review its decision (an implicit refusal of access).

“The Ombudsman opened an inquiry and, as a first step, asked the Commission to reply to the complainant’s request for review.”