Home » Politics » At the White House, an Eerie Quiet and Frustration With the Chief of Staff

WASHINGTON — In a memo to his senior staff on Friday morning, Marc Short, Vice President Mike Pence’s chief of staff, encouraged everyone to stay away from their offices in the Old Executive Office Building while contact tracing was going on. On Saturday, he held an all-staff conference call to discuss what the coming weeks would look like while President Trump remained under treatment for the coronavirus, and later reiterated the message that staff members were to work from home.

At the Trump campaign headquarters in Virginia, Bill Stepien, the campaign manager who tested positive for the virus himself, instructed staff members to “wear a mask, wash your hands, socially distance, check in via the LiveSafe app on a daily basis and work from home if you’re not feeling well.”

Mark Meadows, the White House chief of staff, delivered no guidance to the president’s aides about how they were expected to behave in a moment of crisis. But the West Wing has also been a ghost town since Mr. Trump’s departure for Walter Reed National Military Medical Center on Friday afternoon.

With the president hospitalized and Melania Trump, the first lady, who also tested positive, recovering in the residence, only a few officials came in over the weekend for television appearances or to give Mr. Trump a national security briefing by phone.

The West Wing always clears out when the president is not in the building, usually because a large portion of the senior staff travel with him wherever he goes or on weekends. But over the past few days, it has been even quieter.

A number of staff members are either sick themselves or quarantining after being in contact with Mr. Trump or colleagues who have tested positive for the coronavirus. Some advisers, like Mr. Meadows and Dan Scavino, the deputy White House chief of staff for communications, have been at the hospital in order to remain in the president’s immediate orbit.

Missing as well in recent days has been a deployment of West Wing staff members, including Pat Cipollone, the White House counsel, and some communications staff members like Julia Hahn and Ben Williamson, who have been working out of Mr. Pence’s office on Capitol Hill in preparation for the expected Supreme Court confirmation hearings for Judge Amy Coney Barrett. Mr. Pence himself was working from his residence over the weekend.

The lack of marching orders from Mr. Meadows was not exactly a surprise to many administration officials. They have long expressed frustration at how he operates, neglecting to relay messages to the president from agency leaders who ask to speak with him and giving off the impression that he is focused solely on trying to score a legislative victory for himself to please the boss.

Some Trump allies on Capitol Hill said it was “disturbing” to see how Mr. Meadows was handling the current crisis. And administration officials were left puzzling over his strategy or motives for delivering information about Mr. Trump’s health.

On Saturday, Mr. Meadows contradicted the everything-is-fine message delivered by the president’s physician, telling reporters, “we’re still not on a clear path to a full recovery,” on the assumption that he would not be identified. Mr. Meadows, however, was caught on camera speaking to the reporters, making it clear that he was the source of the grimmer update.

Some Trump allies defended him. “I think it was smart for the White House to set the record straight,” said Karl Rove, a former top adviser to President George W. Bush, who has served as an informal adviser and sounding board for Mr. Trump and his campaign. “What we’ve learned from this virus is there comes a period where you have to closely monitor it. He was smart to do that and say that. There’s nothing lost by him saying the reality.”

But some administration officials were shocked by the image of the White House chief of staff trying to whisper anonymously to reporters and getting caught. The reaction was also mixed among the staff, but the episode did not exactly help Mr. Meadows’s reputation among those who work for him.

Of course, lack of direction from the top is nothing new in the Trump White House. None of Mr. Meadows’s three predecessors was ever able to bring much order to the operation, either because many on the staff neither want nor heed their guidance.

Still, the dynamic left staff members unsure of what the week would look like.

“We’re following our general protocols, which are in line with C.D.C. guidelines,” Alyssa Farah, the White House communications director, said on Sunday. “When we had a previous positive case in the West Wing a few months ago, certain people who were potentially exposed versus second-degree contact, stayed home for the period. So we’ll be working that way.” 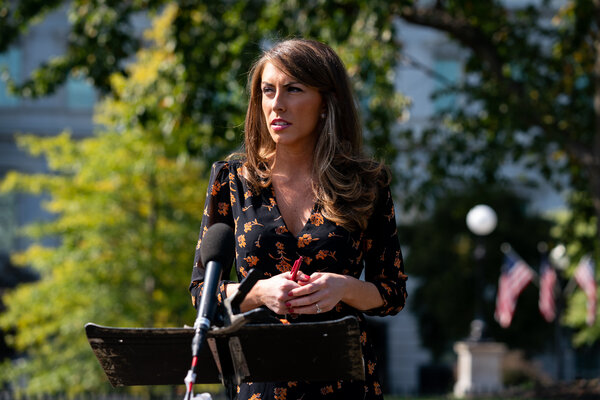 Ms. Farah, who spoke to reporters without a mask because she said she had left it behind after a television appearance on Fox News, said staff members would wear masks — a practice that a majority of those working in the West Wing have not followed over the past six months — and the routine deep cleaning of work spaces would continue. “We are fully functioning,” she said. “We’re going to be working throughout.”

Some officials, however, were still coming in to the office despite having had direct contact with colleagues who had tested positive.

Kayleigh McEnany, the White House press secretary, was advised by the White House medical unit that she had been in contact with Hope Hicks, Mr. Trump’s close adviser who tested positive, when she could have been contagious, according to multiple officials.

But Ms. McEnany arrived at work on Friday and part of Saturday, though she was uncharacteristically wearing a mask. A White House official said Ms. McEnany did not have to go into quarantine because she was an essential worker and had tested negative every day since her interaction with Ms. Hicks, including on Sunday.

Adding to unease about the work environment in the West Wing was the fact that Ms. McEnany said on Sunday that there were no plans to reveal how many staff members had tested positive because of “privacy concerns.”

Later on Sunday evening, the White House management office sent out the first campuswide note since Mr. Trump’s positive test. The guidance reiterated reminders about symptoms and when employees should stay home, and included an unusual addendum noting that staff members who thought they should be teleworking should discuss it with their supervisors.

Outside the White House, Trump allies seemed less worried about the government continuing to function and more concerned about the trajectory of a presidential campaign that is now unsure what its narrative is.

Many of them are still counting on Judge Barrett’s nomination to shift the news cycle away from the coronavirus and the president’s illness if he recovers and returns to the Oval Office and campaign trail to focus on her confirmation battle.

“The hope of Republicans was that the Barrett nomination could save them, that she’d shine like a star and put some new wind in the sails,” said Stephen Moore, a member of Mr. Trump’s economic task force. “That’s all that we would be talking about right now.”

Mr. Moore said that would still be possible if the president recovered soon.

“Hopefully, Trump is better in a week or so, and he can come back stronger and better than ever,” he added. “That’s the hopeful scenario.”