President Biden justified his broad vision to remake the American economy as the necessary step to survive long-run competition with China, a foot race in which the United States must prove not only that democracies can deliver, but that it can continue to out-innovate and outproduce the world’s most successful authoritarian state.

His speech to Congress was laced with the themes of a new iteration of Cold War competition — more technological than military — without ever uttering the words Cold War. America’s adversaries, Mr. Biden said, are looking at America’s deep polarization and the Jan. 6 assault on the U.S. Capitol “as proof that the sun is setting on American democracy.”

“We have to prove democracy still works,” Mr. Biden said, repeating a rallying call he first used a month ago, and that aides say he often invokes in White House strategy sessions.

It was all part of Mr. Biden’s effort to lift his infrastructure and rebuilding plans to a higher plane, much as John F. Kennedy did in his “we choose to go to the moon” speech nearly six decades ago. But the history of more recent efforts by American presidents to revive that unifying national emotion is mixed at best; Barack Obama attempted it with his call to meet “our generation’s Sputnik moment” in his State of the Union address 10 years ago. It fell flat.

A decade later, the challenge is even more complex: The United States now faces a far more capable technological competitor, a far more complex military standoff, and a starker ideological conflict. “We’re at a great inflection point in history,” Mr. Biden said. In fact, he is facing the worst relations in two decades with very different superpower adversaries that are seeking to exploit America’s very visible divisions. And so he is making the case that the country must compete with rising power in China, while containing a disrupter in Russia.

Whether he can turn both the country and America’s allies to that task, his aides acknowledge, may well define his presidency.

Xi Jinping, the Chinese leader Mr. Biden got to know a decade ago, is “deadly earnest on becoming the most significant, consequential nation in the world,” Mr. Biden argued. And Mr. Xi and President Vladimir V. Putin of Russia, who are developing their own alliance of convenience to challenge the United States, are among those who “think that democracy can’t compete in the 21st century with autocracies, because it takes too long to get consensus.”

Even the Republicans who denounced Mr. Biden’s plan Wednesday night as “socialist dreams,” the phrase used by Senator Tim Scott of South Carolina in the Republican response, do not argue with his China analysis. When Mr. Biden said “there is simply no reason why the blades for wind turbines can’t be built in Pittsburgh instead of Beijing. No reason, none,” he sounded a lot like George W. Bush 20 years ago, with echoes of Donald J. Trump. 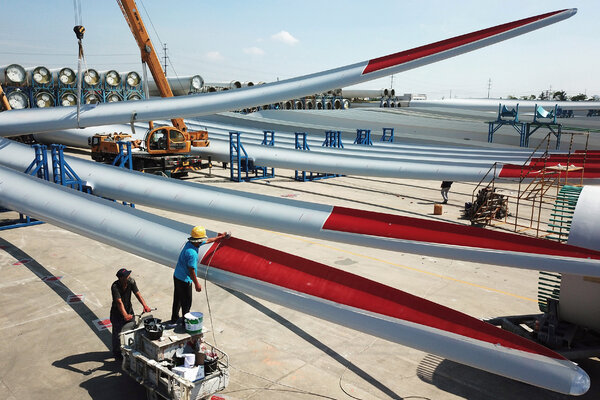 When he added that there was “no reason why American workers can’t lead the world in the production of electric vehicles and batteries,” he was combining two of his signature arguments: that the United States has the capability to outpace China, and his assertion that a green agenda produces jobs.

Yet the technological competition, while central to the problem, is only part of it. The infrastructure plan, with its emphasis on moving semiconductor manufacturing back to the United States and focusing on 5G networks, artificial intelligence and advanced robotics, is the modern-day space race. But Mr. Biden’s first 100 days have also been marked by pushing back on human rights violations and territorial threats, and declarations that Russia had to back off from Ukraine and China had to stop threatening Taiwan. That all adds a darker element.

“I hope, as Biden said, that our competition with China can remain free of conflict and our responses to Putin’s belligerent actions can remain proportionate, while still trying to engage with Beijing and Moscow on issues of mutual interest,” said Michael D. McFaul, the Stanford political scientist who served as Mr. Obama’s ambassador to Russia.

“I fear that the challenges from both of these autocracies also will require grander strategies of containment,” he said. “After all, we compete with China not just in markets, but also regarding security and ideological issues, which tend toward more conflictual, zero-sum outcomes.”

Mr. Biden has already acknowledged that, implicitly, in his announcement imposing sanctions earlier this month against Russia for its SolarWinds cyberattack on federal agencies and businesses, and for its disinformation efforts during the 2020 elections. But as Mr. McFaul noted, “Ukrainians, Belarusians, Georgians and Navalny supporters will remind you that those are not the only two domains in which Putin is acting belligerently against those fighting for freedom and human rights.”

What is becoming clear from Mr. Biden’s first months in office — and from the Wednesday speech — is that he is pursuing very different strategies for China and Russia.

He clearly regards Mr. Xi as a worthy competitor who will force America to up its game — thus the focus in his speech on education, speedier, universal internet access, and on partnerships with industry in new technologies. Mr. Biden has made clear to his aides, in lengthy Situation Room sessions on China strategy, that his administration must finally focus the country on the existential threat of a world in which China dominates in trade and technology, and controls the flow of electrons — and the ideas they carry.

In contrast, he regards Mr. Putin’s Russia as a declining power whose only real capability is to act as a disrupter — one that seeks to split NATO, undermine democracy and poke holes in the computer and communications networks that the United States, and the rest of the world, depend upon. That came through in the speech. While he did not repeat his reference to Mr. Putin as a “killer,” he focused on the recent sanctions. “He understands we will respond,” he said, while opening the door to new agreements on arms control and climate.

But making this twin strategy of competition and containment work, Mr. Biden acknowledged at one point, depended on persuading Americans to make the necessary investments, and convincing allies that the United States would have their backs.

The pandemic response, he suggested, paved the way. One hundred days ago it would have been hard to imagine any country turning to the United States for coronavirus aid; now India has, and the pressure on Mr. Biden is how fast he can deploy vaccines to the rest of the world, at a moment that domestic politics suggests he needs to vaccinate all willing Americans first.

But when the pandemic abates, the divisions in the United States will remain. And those divisions, he knows, will be exploited by Mr. Xi and Mr. Putin to further their argument that America is in terminal decline.

It is still a powerful argument, one that Mr. Biden acknowledged when he described his conversations with nearly 40 world leaders.