Home » Politics » Biden is expected to require the vast majority of federal workers and contractors to get vaccinated.

President Biden on Thursday will sign executive orders requiring the vast majority of federal workers and contractors who do business with the government to get vaccinated against the coronavirus, as part of an aggressive new plan to that will also put pressure on private businesses, states and schools to enact stricter vaccination and testing policies as the Delta variant continues its spread across the United States.

The mandate will apply to employees of the executive branch, including the White House and all federal agencies and members of the armed services — a workforce that numbers more than 4 million — but not to those who work for Congress or the federal court system, according to a person familiar with the plan.

The spread of the highly infectious variant had pushed the country’s daily average caseload over 150,000 for the first time since late January, overwhelming hospitals in hard-hit areas and killing roughly 1,500 people a day. The surge has alarmed Mr. Biden and his top health advisers, who see mass vaccination as the only way to bring the pandemic under control.

Mr. Biden, who was briefed by his team of coronavirus advisers on Wednesday afternoon, is set to deliver a speech at 5 p.m. Eastern that will address about six areas where his administration can encourage — or, at this point, push — more eligible Americans to receive vaccines.

Mr. Biden had already pushed federal workers to get vaccinated by announcing that those who refused would have to undergo regular coronavirus testing. But the surge, coupled with the recent decision by the Food and Drug Administration to grant full approval to the Pfizer-BioNTech vaccine to those 16 and older, has made him decide to take more aggressive steps, eliminating the option of testing, the officials said.

Two officials familiar with the plan said that its underlying message would be that the only way to return to some sense of normalcy was to get as many people vaccinated as possible.

“We know that increasing vaccinations will stop the spread of the pandemic, will get the pandemic under control, will return people to normal life,” Jen Psaki, the White House press secretary, told reporters on Wednesday. “That’s what our objective is, so we want to be specific about what we’re trying to achieve.”

The F.D.A.’s decision last month to grant full approval to the Pfizer-BioNTech vaccine has already prompted the Pentagon to require members of the military to be vaccinated. Mr. Biden said at the time that the approval should sweep away any lingering doubts about vaccination and spur more mandates.

When asked if Mr. Biden would be adding more detail to existing policies or would outline measures that would have an immediate and broad effect on Americans, Ms. Psaki replied: “It depends on if you’re vaccinated or not.”

Administration officials see signs that more people in the United States are open to receiving shots — some 14 million got their first shots in August, four million more than in July, Ms. Psaki said. But about 27 percent of the eligible U.S. population age 12 and older have not received any Covid vaccinations, according to data from the Centers for Disease Control and Prevention. In some of the hardest-hit states, the unvaccinated percentage is higher: 42 percent in Texas, for instance, and 38 percent in Florida. 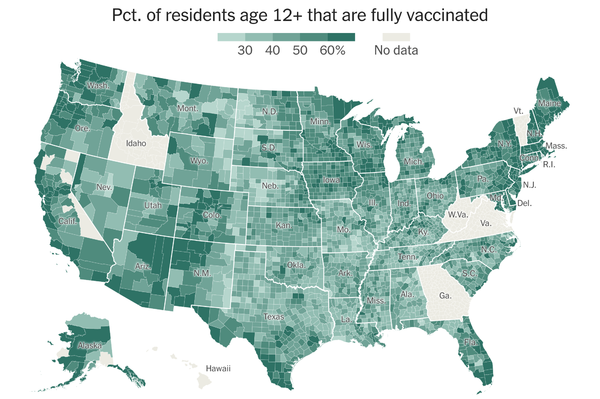 See How Vaccinations Are Going in Your County and State

See where doses have gone, and who is eligible for a shot in each state.

About 1.3 million fully vaccinated people have received a third shot after federal officials approved them for people with compromised immune systems. Mr. Biden has publicly supported the idea of broadening the availability of third shots as boosters for much more of the population, but health experts have advised the White House to hold off promoting that for now.

On Wednesday, Ms. Psaki said that the White House was working toward a plan for boosters, but did not give a time frame. She told reporters that Mr. Biden had chosen Thursday to deliver an extensive speech on the virus because he understood it was “top of mind for Americans” as they return to schools and offices.

Understand Vaccine and Mask Mandates in the U.S.