The debt forgiveness comes after months of deliberations in the White House over fairness and fears that the plan could exacerbate inflation before the midterms. 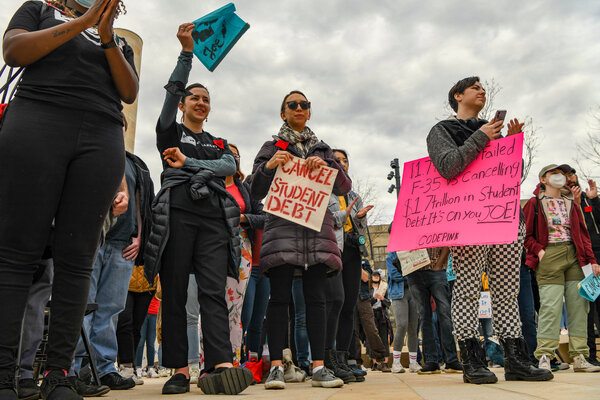 WASHINGTON — President Biden will announce on Wednesday that he is canceling $10,000 in student loan debt for Americans earning $125,000 or less per year and extending a pause on payments for all borrowers until Dec. 31, capping months of anticipation over a campaign promise to provide economic relief to millions of people, according to four people familiar with the announcement.

Mr. Biden will also announce an additional $10,000 of debt forgiveness for students who received Pell grants in college, focusing the additional aid on people from lower-income backgrounds.

The debt forgiveness, although far less than the amount that some Democrats had been pushing for, comes after months of deliberations over fairness and fears that it could exacerbate inflation before the midterm elections. The plan will almost certainly face legal challenges, making the timing of any relief uncertain.

The question of how far the United States should go in providing debt forgiveness — and who should benefit from it — emerged as one of the more contentious issues for Mr. Biden and exposed deep divisions in the White House. Across the United States, 45 million people owe $1.6 trillion for federal loans taken out for college — more than they owe on car loans, credit cards or any consumer debt other than mortgages.

Many Democrats have argued that debt forgiveness is necessary to address racial disparities in the economy. But critics say widespread debt forgiveness is unfair to those who tightened their belts to pay for college, and Republicans and some Democrats contend that it will add to inflation by giving consumers more money to spend.

The White House sought to address those economic concerns by targeting the relief. Mr. Biden also paired the forgiveness with an announcement that all student borrowers must resume repayment of their loans after the end of the year, ending a pause that was put in place as the pandemic recession deepened in March 2020.

On its face, the move could cost taxpayers about $300 billion or more in money they effectively lent out that will never be repaid. But the true cost is harder to calculate, and smaller, because much of that debt was unlikely to ever be repaid. More than eight million people — one in five borrowers with a payment due — had defaulted on their loans before the coronavirus pandemic. Many of those people carried fairly small balances and will now be eligible to have their loans canceled.

Many Democratic lawmakers and progressive groups had argued that addressing economic racial disparities would require forgiving $50,000 of debt, citing reports showing that Black and other nonwhite borrowers end up with higher average loan balances than their white peers.

But Representative Tony Cárdenas, a California Democrat who met with the White House to advocate debt cancellation, said even the limited student debt relief could be the galvanizing factor Mr. Biden’s party needs before the midterms in November.