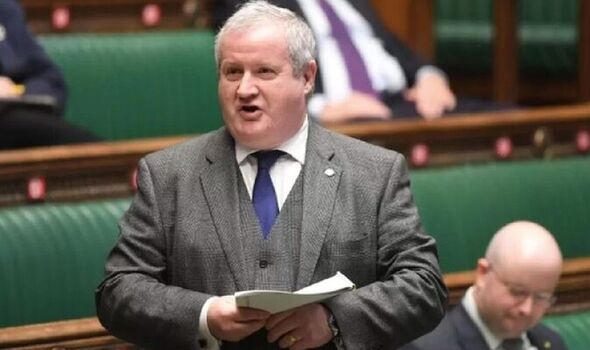 Ian Blackford may be facing a coup from within the SNP to replace him as their leader in Westminster.

Stephen Flynn, the Aberdeen South MP and energy spokesman, has informed senior party officials of his intention to lead the group in the Commons, according to The Times.

Around midday on Thursday, it became apparent he had the backing of enough MPs to succeed in a leadership challenge.

According to the Scottish Daily Express, Mr Flynn will officially log his name at next month’s annual general meeting of the SNP Westminster group, while discussion of the leadership has since been added to the agenda of a meeting of Saturday’s SNP national executive committee.

Mr Flynn has since denied any intention of replacing Mr Blackford, although sources claim that the SNP is facing “rumours” of a coup, with MPs reportedly siding with Mr Flynn behind the scenes.

Scottish Labout MP Ian Murray tweeted this afternoon that there are “rumours abound at Westminster that Ian Blackford is to face a challenge to his leadership of the SNP group. They are very much not a happy bunch at the moment.”

According to the Times, a source said: “Blackford has carried out meetings with every MP over the past couple of weeks to try and galvanise support but his leadership was found to be lacking and this prompted the decision for MPs on the bench to join team Flynn.”

An MP added: “[Flynn has] been on manoeuvres for some time but finally has the numbers.”

He commented: “The removal of Ian Blackford by his fellow SNP MPs would be a humiliation for Nicola Sturgeon. Shamefully she stood by him earlier this year despite how appallingly he handled the complaints made about Patrick Grady. In that case Ian Blackford put the needs of the perpetrator above a complainer who had bravely come forward.

“Instead Ian Blackford should have been sacked on the spot by Nicola Sturgeon as a result of his disgraceful behaviour. The fact that Nicola Sturgeon was prepared to stand by him spoke volumes about her lack of judgement. With SNP MPs now on manoeuvres to try and remove their Westminster leader, it is clear that they are in disarray and Nicola Sturgeon is losing her grip.”

Mr Flynn has since responded to the claims. He said on Twitter: “As much as I love seeing photos from the days when I was still clinging on to some hair, I can confirm I’ve no intention of standing.”

Mr Blackford faced pressure to resign for his handling of a sexual assault investigation concerning Patrick Grady, the MP for Glasgow North who was found to have made a sexual advance to a teenage SNP staffer.

The former SNP Chief Whip at Westminster had breached Parliament’s sexual misconduct policy – but in a meeting in June, Mr Blackford reportedly called for MPs to give their “full support” to Mr Grady.

According to the Daily Mail, Mr Blackford said of Mr Grady: “He’s going to face a number of challenges over the short term and so he should have our absolute full support.

“I for one very much look forward to welcoming Patrick back into the group next week. I am sure that everybody here will agree.”

Nicola Sturgeon said there is an “absolute assurance” that the SNP will “reflect” on its internal processes in the wake of Mr Grady’s suspension.

“Ever since this complaint was first raised the SNP have been evasive and sought to sweep it under the carpet. Then, Blackford and his colleagues were shamefully mealy-mouthed in condemning Patrick Grady when the brave victim was vindicated this week.”

A report into his conduct said that the Glasgow North MP had “made an unwanted sexual advance to the complainant that included the touching and stroking of the complainant’s neck, hair, and back”, with the report adding he was “under the influence of alcohol” at the SNP social event in 2016.

The man he targeted, who was 19 at the time, said he is “bitterly disappointed” at the “lenient” sanction. The complainant also criticised the SNP’s handling of the situation, saying he has been made to feel as though it is his fault, and said his life has been a “living hell”.

A spokesman for the SNP Westminster group said: “Staff and MPs have been offered pastoral support throughout this process. The group has a duty to ensure the personal welfare of all involved, including the impact on mental health and well-being.”