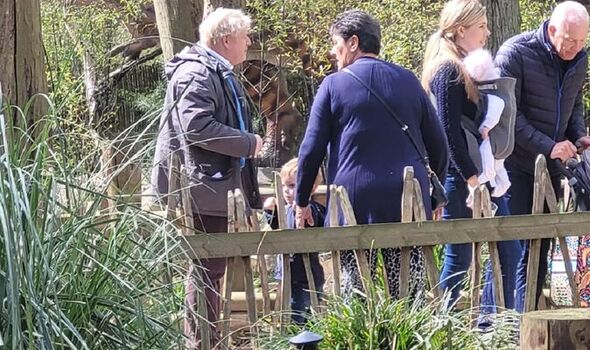 Two days after walking the war-torn streets of Ukraine with Volodymyr Zelensky, the Prime Minister was back on daddy duties with his young children. Our exclusive pictures show Mr Johnson carrying his son Wilfred, who turns two later this month. Wife Carrie holds baby Romy nearby in a carrier, with the little one protected from the spring chill by a pink bobble hat.

The Johnsons were enjoying a day out at Paradise Wildlife Park, in Broxbourne, Hertfordshire.

In one picture, Mr Johnson is seen holding Wilfred, who like his father has a shock of thick blond hair, at the World Of Dinosaurs exhibition.

The attraction features 30 life-sized, animatronic dinosaurs, including one fearsome-looking T-Rex. A member of the public said the Johnsons had arrived without any fanfare – albeit with a security detail in the background. The onlooker said: “They just looked like any other family really. Everyone was ignoring them in the main.”

The wildlife park visit came before Mr Johnson heads to Chequers for an Easter break.

Downing Street said he would be spending the week at the official retreat in Bucks, with a view to having “a bit of a break” for a few days. A No 10 spokeswoman said the intention is for the Prime Minister to “get some rest and spend some time with family”.

Yesterday’s fun contrasted with the gravity of the war on Ukraine, which led Mr Johnson to risk a vist to Kyiv at the weekend.