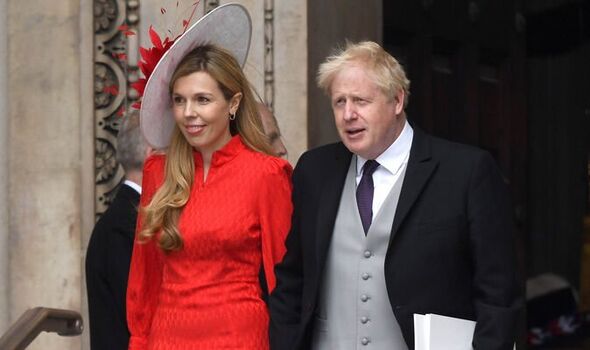 Every living former Prime Minister joined the thanksgiving service including Sir Tony Blair and his wife Cherie, Gordon Brown and wife Sarah, Theresa May and her husband Philip, and David and Samantha Cameron. The Prime Minister wore a black jacket with a grey waistcoat, while Carrie opted for a long red dress. First Minister of Scotland Nicola Sturgeon, joined by her husband Peter Murrell, and Labour leader Keir Starmer watched on as Mr Johnson gave a reading of Philippians Chapter 4, verses 4-9 from the New Testament.

Foreign Secretary Liz Truss took her seat between Carrie and Ms Patel who was dressed in bright pink.

The politicians, diplomats and royals arrived to the sound of trumpets, drums and cheers from the assembled crowds outside.

One of the country’s largest bells, the Great Paul, was rung before the service and after, for the first time on a royal occasion.

Some of the more than 400 guests who attended the main event included charity volunteers, teachers, NHS staff and members of the armed forces.

They are all people who have worked tirelessly during the pandemic to make a difference either nationally or locally.

The service featured a new anthem by Judith Weir, Master of the Queen’s Music, that sets to music words from the third Chapter of the biblical Book of Proverbs.

The Band of Her Majesty’s Royal Marines Portsmouth played as the congregation arrived, with the State Trumpeters of the Household Cavalry performing to mark royal arrivals.

The choirs of St Paul’s Cathedral and Her Majesty’s Chapel Royal joined together to sing the Vivats, I Was Glad by Sir Hubert Parry, performed at every coronation and now for the Queen’s Platinum Jubilee.

Her Majesty pulled out of the thanksgiving service after experiencing “discomfort” the previous day.