The Prime Minister faces a busy month of international travel with two major summits and intensifying EU trade negotiations in June when his girlfriend Carrie Symonds is thought to be due to give birth. On Saturday, the couple ended weeks of speculation by confirming her pregnancy. Mr Johnson, 55, and 31-year-old Miss Symonds also announced that they are engaged to be married.

But aides are concerned the Prime Minister could well be abroad when his partner goes into labour.

He is due to attend a G7 Summit with other world leaders at US President Donald Trump’s Camp David in Maryland in mid-June.

His stay in the US could be extended by meetings connected to the push for a trans-Atlantic trade deal.

Mr Johnson is also expected to attend the Commonwealth Heads of Government Meeting in late June.

And with the UK-EU trade talks due to reach a crucial stage in the same month, the Prime Minister could be expected to travel to Brussels and other European capitals in an effort to break the looming deadlock in the talks.

A major “stock take” on progress in the talks is scheduled for June which will determine whether they continue or are dropped in favour of the UK heading to a relationship with the EU based on World Trade Organisation rules from next year.

Downing Street officials were yesterday unable to say whether Mr Johnson will take paternity leave after the birth.

New fathers are currently entitled to take up to two weeks of paid paternity leave. 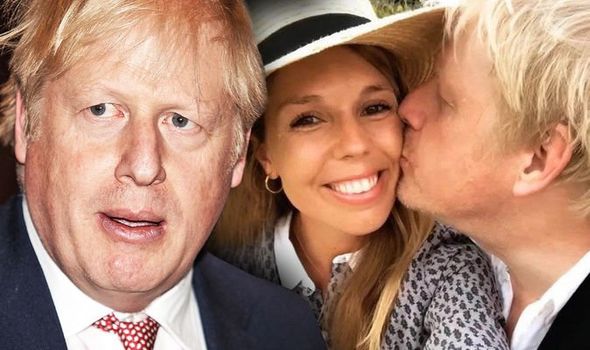 Miss Symonds spoke of her joy at the baby news in a post on Instagram on Saturday.

Under her nickname of “Apples”’, she wrote: “We got engaged at the end of last year…and we’ve got a baby hatching early summer.”

He said she felt “incredibly blessed” following the news.

Mr Johnson was thought to have proposed during the couple’s holiday on the Caribbean island of Mustique during the Christmas break.

The marriage, which will be Mr Johnson’s third, will make him the first premier to marry while in office since Lord Liverpool nearly 200 years ago.

He has at least five children from his previous marriages. 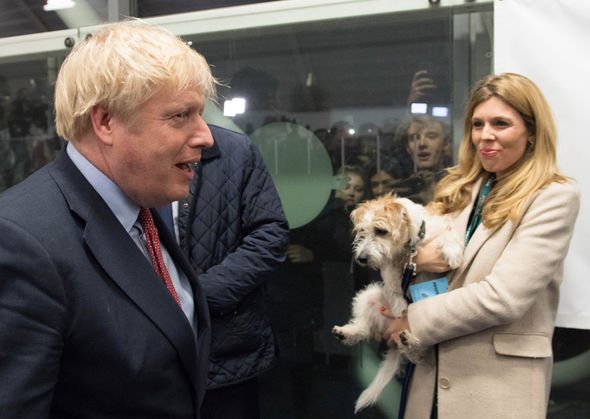 Earlier this month, a court heard the Prime Minister and his estranged second wife Marina Wheeler were preparing to end their marriage after reaching a settlement over money.

Mr Johnson and Miss Symonds are also the first couple to officially live together in Downing Street when they moved in last year.

Miss Symonds, a conservationist and former Conservative Party communications chief, first found herself making headlines when she was romantically linked to Mr Johnson earlier in 2019.

But her association with Mr Johnson dates back to when she worked on his successful re-election bid at City Hall in 2012.

The new arrival will be the third baby born to a serving prime minister in recent history.

READ MORE: WILL BORIS AND CARRIE NAME THEIR CHILD BREXIT?

David Cameron and his wife Samantha welcomed daughter Florence Rose Endellion Cameron into the world in 2010, three months after Mr Cameron had formed a coalition government with the Liberal Democrats after that year’s general election produced a hung parliament.

The last babies born to prime ministers before Leo and Florence arrived more than 150 years ago.

Lord John Russell’s wife Lady Russell gave birth to two sons, George and Francis, during her husband’s first stint in office between 1846 and 1852.

Mr Johnson is believed to be the first prime minister to get divorced and marry in office in modern times.

The last PM to do so was Augustus Henry FitzRoy, the 3rd Duke of Grafton, who became prime minister in 1768 and got divorced and remarried the following year.

Miss Wheeler and Mr Johnson, who have four children, separated in 2018 after marrying in 1993.

The couple announced they had separated in September 2018.

He was a childhood friend of Miss Wheeler – the daughter of BBC journalist Charles Wheeler – when both were pupils at the European School in Brussels.

Mr Johnson met his first wife, Allegra Mostyn-Owen, while they were students at Oxford.

In 2013 it emerged during another court hearing that Mr Johnson had fathered a daughter during an adulterous liaison while Mayor of London in 2009.

In 2004, he was sacked from the Tory frontbench over a reported affair with journalist Petronella Wyatt.