Former MP for South West Hertfordshire David Gauke believes the Prime Minister is wasting his time trying to convince the EU to keep trading with the UK and should actively seek no deal at the end of the transition period this year. This comes as the government revealed the UK is prepared to walk away from trade talks with the bloc as early as June if the talks reach a stalemate. Mr Gauke told Conservative Home: “In terms of getting preferential access to EU markets, the best one can hope for is an unambitious, thin free trade agreement.

“Such an agreement will be better economically than a departure on WTO terms but not that much better.

“Another way of putting it is that the economic downside of failing to get a deal is not that much because we have already accepted a great deal of pain as it is.

“The second consequence is that if ‘recovering our political and economic independence in full’ is, to use David Frost’s word, ‘fundamental’ to Brexit then it is very hard to find a compromise.

“Any deviation from such a position opens up a political vulnerability. The political pain of compromise gets greater every time someone in Number 10 makes the fundamentalist case.” 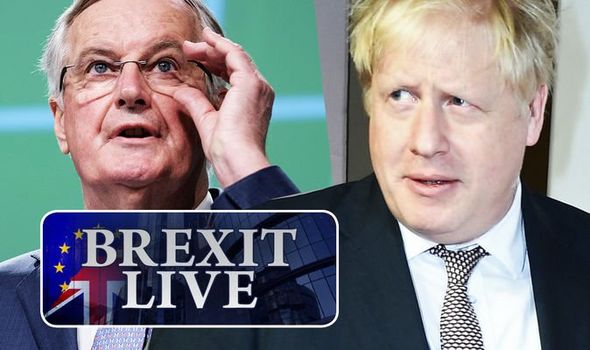 Mr Gauke added that the EU may not support the Prime Minister if he demands too much for the UK.

He said: “There is a further difficulty with reaching a deal. Any deal that Boris Johnson gets is one that he will sell with gusto.

“It will be a fabulous deal, the best possible deal, a triumph.

“This has its advantages but it also means that the Prime Minister will have ownership of the consequences of the deal. If it turns out to be less than a triumph, there is no one else he can blame. The buck will stop with him.”

11.12am update: Trade talks to be held in English as EU made to pay for French translation

In an early victory for Britain, the Government and European Commission confirmed “negotiations shall be conducted in English”.

Only in “justified circumstances” will the negotiation teams be able to alternate to French when formal talks begin on Monday.

A joint document published today adds: “Interpretation from and into French will be provided at the expense of the party using French.”

10.29am update: Brexit 50p coins drop out of circulation as collectors refuse to spend them

The Treasury has confirmed Brexit 50p coins are going missing because collectors are refusing to spend them.

Many have been withdrawn from circulation by collectors who do not want to part with this piece of history.

Collectors were offering to pay £1 for any Brexit 50p coins on a Facebook page run by numismatists this week.