Meanwhile, in Brussels, President of the European Parliament David Sassoli has warned any attempt to change the withdrawal agreement would result in “serious consequences”. UK chief negotiator David Frost and EU opposite number Michel Barnier will continue their discussions today, with significant differences remaining between the two sides as they try and thrash out a trade deal before the end of the year.

Their timetable includes six hours solely devoted to fishing rights, with access to British waters after December 31 a key sticking point. Mr Sassoli was commenting on reports that legislation due to be published by the UK Government today will seek to alter the Northern Ireland protocol which aims to prevent a hard border with the republic by leaving some goods subject to EU checks. 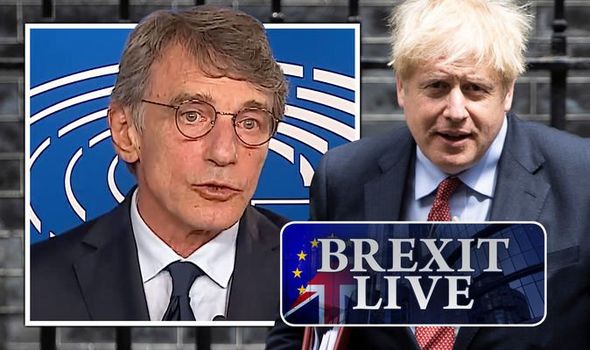 In a post on Facebook, he said: “I am deeply concerned about the lack of progress in the withdrawal negotiation with the United Kingdom, whose sovereignty the European Union respects.

“At the same time, we expect the UK to abide by our core principles which we have been clear and transparent from the start.

“We also expect the commitments it negotiated and signed last year to be respected, especially in relation to the rights of the citizens of Northern Ireland.

“Any attempt to undermine the agreement would naturally have serious consequences.”

[SCROLL DOWN FOR REGULAR UPDATES]

A cabinet minister has fuelled tensions in the EU trade talks by confirming that Boris Johnson will break international law to ensure a smooth Brexit.

Northern Ireland Secretary Brandon Lewis angered Brussels officials and MPs by admitting a Government bill to be published today [Wednesday] will breach the Withdrawal Agreement with the bloc “in a very specific and limited way”.

EU sources claimed the move could have “huge consequences” for the increasingly bitter negotiations over a UK-EU trade deal.