The Prime Minister has continued to insist the UK will not be bound by the political declaration attached to the withdrawal agreement he has agreed with the EU. Downing Street sources, reported by the Daily Telegraph, said the rules of engagement agreed last year with Brussels had been superseded by promises made in the Conservative Party manifesto on which it was elected at the end of last year. Mr Johnson now firmly believes he is within his rights to return to previous agreements covering key areas from borders, to fishing rights and state aid. 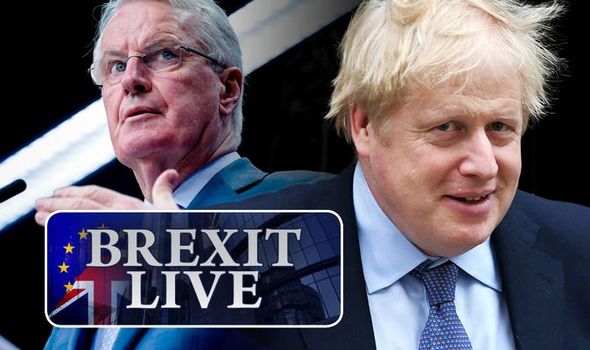 But he is set for an almighty clash with the EU’s chief Brexit negotiator Michel Barnier, who has continued to warn the political declaration must be followed as originally agreed.

Downing Street has made clear the EU has quietly relented on some of the commitments it made in the political declaration when it published its own negating mandate on Monday in a move it claims means it is not a binding agreement.

Mr Johnson’s official spokesman said: “The Withdrawal Agreement is an international treaty – the political declaration is not of that status.”

The UK Government will publish its negotiating mandate on Thursday but the Prime Minister is likely to ditch an acceptance of a “level playing field” designed to tie Britain to EU rules and regulations.

A senior Conservative source told the Daily Telegraph: “The Prime Minister’s mandate was derived from the manifesto, which was published after the agreement of the political declaration and is very clear about the Government’s intention, which is to get a Canada-style trade agreement and take back control of our borders, laws and money.”

8.33am update: UK to publish plat for post-Brexit trade talks

Boris Johnson will reveal his plans for a trade deal with the EU ahead of talks with Brussels, but deep divides are likely to exist.

The mandate from the UK Government will stress the Prime Minister’s priorities of ensuring he “political and economic independence” of the UK from January 1, 2021.

It will also clash with the EU by rejecting the EU’s calls for the UK to remain closely aligned with Brussels’ rules and standards to ensure a “level playing field”.

Mr Johnson will instead focus on his push for a Canada-style free trade agreement without the kind of conditions sought by Brussels.

The EU’s mandate called for any agreement to use Brussels’ standards as “a reference point” over time.

This could force the UK to remain aligned with changes to the rules in the future, but this would also breach the Prime Minister’s red lines.

8.20am update: Fifth of Brits trust AI over humans in Brexit talks – study

Research carried out by AI firm Foundtech.ai of 2,000 people in the UK found 22 percent would trust an AI program over politicians to handle complex negotiations such as Brexit.

“On the one hand, consumers appear willing to trust the ruthless rationality and efficiency of AI when it comes to certain tasks. However, the fear of AI ‘taking over’ remains rife.

“There is still an evident knowledge gap surrounding AI. After all, the majority of consumers assume how AI is represented in films and television series is accurate.

“AI will inevitably change the world as we know it, but it will not be in the threatening way that so many people currently assume.

“In reality, AI is a useful tool that offers countless benefits to humans. We must remember that AI’s full potential can only be achieved in collaboration with humans.

“That’s why I’m optimistic that by entering into a partnership, humans and AI will be able to move forward and forge a productive partnership.”