Brexit trade talks will be suspended “for a short period” at a senior level after one of the EU’s negotiators tested positive for COVID-19.

EU chief negotiator Michel Barnier revealed on Twitter that “one of the negotiators in my team” had returned a positive coronavirus test.

He said he and his UK counterpart, Lord Frost, had “decided to suspend the negotiations at our level for a short period”.

“The teams will continue their work in full respect of guidelines,” Mr Barnier added. 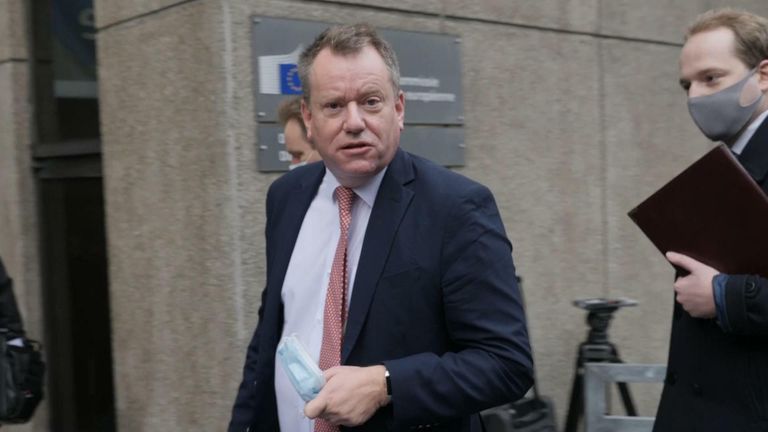 Lord Frost, who is Prime Minister Boris Johnson’s EU adviser, said he was in “close contact” with Mr Barnier about the situation.

Both sides have been negotiating in Brussels this week, with little over a month left before the end of the Brexit transition period on 31 December.

“The health of our teams comes first,” Lord Frost posted on Twitter, as he thanked the European Commission “for their immediate help and support”.

Sky News’ Europe correspondent Adam Parsons reported that Mr Barnier would be going into quarantine, although would remain in contact with Lord Frost.

She added that “work will continue in full respect of” COVID rules.

There are around 50 negotiators on each team, although not all of them meet face-to-face.

It is understood the UK team is currently trying to establish who among them might have had contact with the affected EU official.

The two teams have been attempting to thrash out a future trade deal ahead of 31 December, although negotiations have continued to remain stuck on issues such as so-called “level playing field” commitments and fisheries.

With both the EU and UK parliament needing to ratify any agreement, it is unlikely talks will be allowed to run all the way until the end of the year.

And, without a resolution soon, both sides might turn to preparations for a no-deal outcome.

This could see the two sides trading from 1 January on World Trade Organisation terms – likely to see the erection of tariffs in both directions.

A UK government spokesperson said: “The commission has informed us that an official in their delegation has tested positive for COVID -19.

“We are discussing with them the implications for the negotiations. We have been, and will continue to, act in line with public health guidelines and to ensure the health and welfare our teams.”