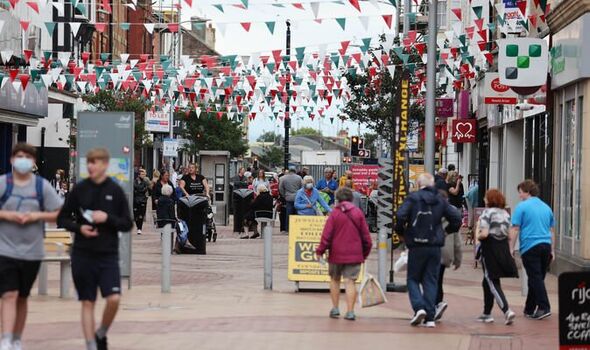 The country’s gross domestic product (GDP) increased by 1.3% between October and December, the Office for National Statistics said. The figure was revised up from a previous estimate of 1%. It marked a bounceback on downwardly revised growth of 0.9% in the third quarter of last year. Data showed the biggest contribution to the growth came from the health and social work sectors with an increase in covid testing and vaccination.

But overall the Office for National Statistics revised down the overall GDP growth for 2021 from 7.5% to 7.4%.

Commenting on the figures, Office for National Statistics director of economic statistics Darren Morgan said: “GDP grew a little stronger than we first thought in the fourth quarter, meaning it is now only 0.1% below its pre-pandemic level.

“Savings were at their lowest level since the start of the pandemic as household spending rose, mainly driven by rising prices.

“The underlying current account deficit halved, as UK-based businesses earned more income from abroad than foreign-based companies earned in the UK for the first time in a decade.”

But the Bank of England and Office for Budget Responsibility (OBR) have forecast a hit to growth this year and next as the Ukraine crisis heightens the cost-of-living squeeze, with households and businesses expected to rein in their spending as prices soar.

In a sign of the impact of rocketing prices, the ONS data showed that household disposable income after inflation fell by 0.1% in the fourth quarter.

This meant Britons began dipping into savings they had built up during the pandemic lockdowns, with the household savings ratio falling to its lowest since the start of the pandemic, at 6.8% in the fourth quarter.

Consumer spending was also revised sharply downwards, from quarter-on-quarter growth of 1.2% previously to 0.5%.

The OBR warned last week that households will suffer the biggest fall in real incomes since records began in 1956 as it forecast inflation will peak at 8.7% in October.

The ONS said gross domestic product (GDP) was 0.1% below where it was before the pandemic and within touching distance of its pre-Covid peak in the fourth quarter.

But revisions to GDP figures for the past two years means the economy grew by 7.4% in 2021 – still a record rebound but lower than the 7.5% initial estimate.

The ONS said this comes after it revised the record-breaking GDP drop at the height of the pandemic in 2020 to 9.3%, against the 9.4% first estimate.

Martin Beck, chief economic adviser to the EY Item Club, said while the economy enjoyed a solid end to the year, the recovery in consumer spending was already starting to lose momentum, even before the inflation impact from the Ukraine war.

He said: “The momentum behind the consumer recovery has faltered.

“And with the household saving ratio now below the average of the decade before the pandemic, the scope for households to offset the squeeze on real incomes by saving less is looking more limited.”

The ONS said the stronger GDP figures for the fourth quarter were due to a rebound in the manufacturing sector, which expanded by 0.4%, against the initial estimate of zero growth.

The latest data confirmed the economy contracted by 0.2% in December as the hospitality and leisure sector felt the brunt of Omicron and related Government restrictions.

Monthly data has since shown a return to growth in January, with GDP rising by 0.8%.