A Treasury minister has not joined the traditional pre-budget photo in Downing Street due to his agoraphobia, he has revealed.

Simon Clarke, the Chief Secretary to the Treasury, is a senior member of Chancellor Rishi Sunak‘s team and has helped prepare Wednesday’s budget and spending review.

He would have been expected to line up outside 11 Downing Street with Mr Sunak and other Treasury ministers on Wednesday morning, ahead of the chancellor delivering his lunchtime statement to the House of Commons. 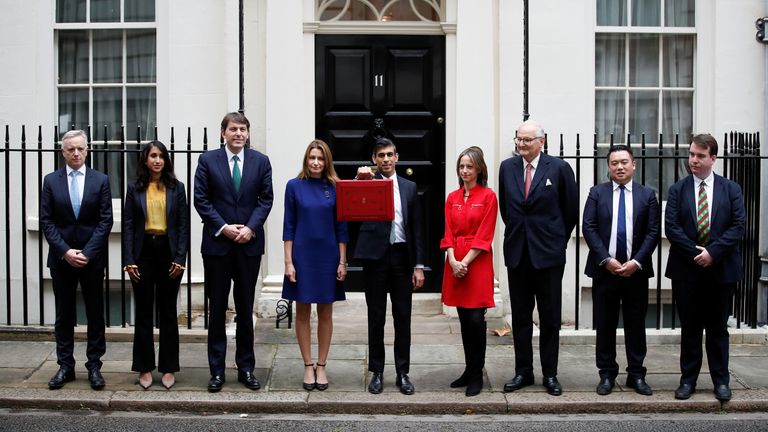 But, posting on Twitter, Mr Clarke revealed why he missed the traditional photocall.

“Really looking forward to explaining the Budget and SR alongside the chancellor,” he wrote.

“I won’t be outside for the photos in Downing Street as I live with agoraphobia – which prevents me being comfortable in some open spaces – but will be busy in parliament and out in the country over the coming days.

“Today is all about a major moment for the UK and we have an important story to tell about investment in our public services and infrastructure, economic recovery, levelling up and net zero – those are the issues I’m proud to be discussing today.”

According to an article written by Professor Kevin Gournay, from King’s College London’s Institute of Psychiatry, agoraphobia in its fully developed form affects around 1.5 million people in the UK.

In its less severe form, around seven million people may be troubled by some agoraphobic symptoms.

“The cause of agoraphobia remains a mystery and it is probably more true to say that it is a matter of a number of causes rather than one single cause,” Prof Gournay wrote for the website of charity No Panic.

Trilby Breckman, national director of the charity Triumph Over Phobia, said: “We commend Simon Clarke for speaking openly about his struggles with agoraphobia.

“For him, the fear of standing outside Downing Street with a crowd of photographers is likely to have been terrifying and overwhelming and would likely lead to a panic attack.

“Phobia is a very common anxiety disorder which can affect one in ten of the population but is very treatable.

“A phobia can cause considerable distress and anxiety and leads to avoidance of the fearful situation wherever possible.

“In time, using exposure therapy Mr Clarke would be able to stand proudly in front of the cameras.

“By openly talking about his phobia he has highlighted how much this anxiety disorder can affect day to day life and we hope he is having treatment to overcome his fears.”

Mr Clarke, a former solicitor, is MP for Middlesbrough South and East Cleveland and was first elected to parliament in June 2017.

He was given his first government role, when he joined the Treasury as Exchequer Secretary, when Boris Johnson became prime minister in July 2019.

He then moved to the Ministry of Housing, Communities and Local Government before resigning as a government minister in September last year for personal reasons.

The 37-year-old rejoined the Treasury in September this year as part of Mr Johnson’s most recent reshuffle.

Follow budget coverage live on Sky News with the chancellor’s announcement from 12.30pm