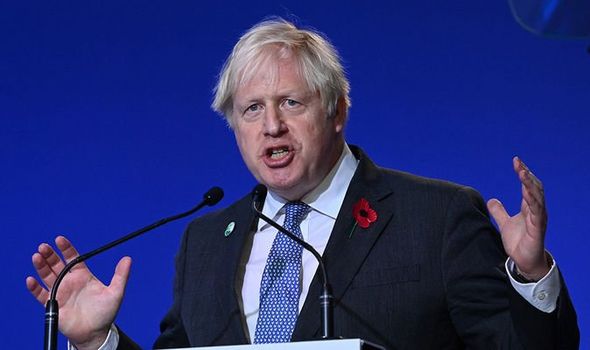 The Prime Minister and the summit executive president Alok Sharma insisted the two-week gathering in Glasgow had been a “historic” moment in the global fight against climate change. Mr Johnson said nearly 200 nations had backed the Glasgow Climate Pact “marking a decisive shift in the world’s approach to tackling carbon emissions”.

The meeting had set a “clear roadmap” to limiting the rise in global temperatures to 1.5C during this century and marked the “beginning of the end for coal power”.

But Mr Sharma was left frustrated when negotiators switched the text in the summit conclusions from a commitment to “phase out” coal to “phase down”.

He had appeared emotional and close to tears in the final moments of the talks.

Mr Johnson, acknowledging the setback, said: “Of course, my delight at this progress is tinged with disappointment.

“Those for whom climate change is already a matter of life and death, who can only stand by as their islands are submerged, their farmland turned to desert, their homes battered by storms, they demanded a high level of ambition from this summit.”

In a swipe at China’s President Xi Jinping and India’s Prime Minister Narendra Modi, Mr Johnson went on: “While many of us were willing to go there, that wasn’t true of everybody. That’s the nature of diplomacy.

“We can cajole, we can encourage but we cannot force sovereign nations to do what they do not wish to do.

“But we can be immensely proud of what has been achieved by Alok Sharma and his team.”

Mr Johnson tried to diminish the significance of the text change, saying: “It’s an immense thing to get a commitment from 190 countries to phase down or phase out coal. It has sounded the death knell for coal power.”

He added: “For all our disagreements, the world is undeniably heading in the right direction.

“Even the most pessimistic commentator will tell you that 1.5C, that goal of restricting the growth in temperatures, is still alive.

“There’s still a long journey ahead and little time to complete it but COP26 has shown we can do this.

“We can put the brakes on runaway climate change, and we can preserve our planet for generations to come.”

Mr Sharma, who will remain COP boss until next year’s summit in Egypt, admitted to being emotional.

He said: “There was one really tense hour where I did feel the weight of the world on my shoulders. This deal was absolutely in jeopardy. We got it over the line.”

But Labour said Mr Johnson had under-delivered ” with shadow environment secretary Ed Miliband claiming: “This summit made modest progress but the Prime Minister over-selling what it achieved serves nobody.

“The truth is that we are miles off where we need to be to halve emissions this decade and deliver justice for developing countries.”