Home » Politics » COVID-19: Boris Johnson says it’s ‘highly probable’ worst of pandemic is over – but warns people not to ‘throw caution to the winds’

Boris Johnson has claimed it is “highly probable” the worst of the coronavirus pandemic is over – on the day the UK recorded its highest number of daily cases for six months.

The prime minister urged people not to “throw caution to the winds” when most legal restrictions in England end on Monday, as he acknowledged there would be more hospital admissions and deaths in the “difficult days and weeks ahead”.

Latest figures show there had been a further 48,553 cases of COVID-19 as of 9am on Thursday. 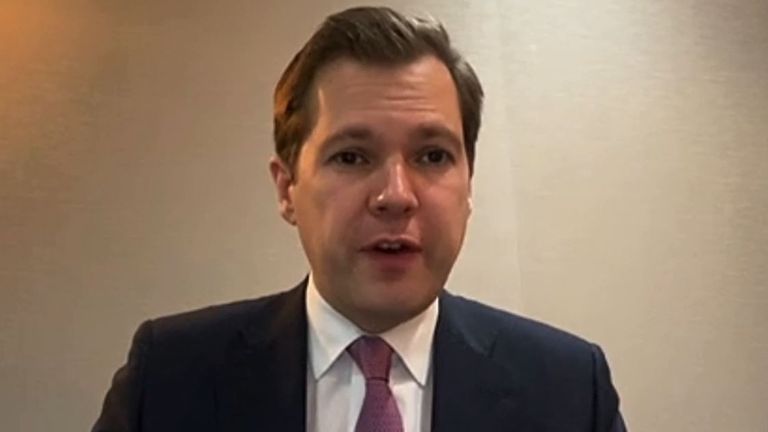 A further 63 people have died within 28 days of testing positive for the virus.

A total of 49 deaths were recorded on Wednesday, making this increase the highest day-on-day rise since 26 March.

Mr Johnson has said recently that daily cases could reach 50,000 by Monday, while Health Secretary Sajid Javid has spoken of case numbers topping 100,000 this summer.

But speaking on Thursday, he said the success of the UK’s vaccination programme, which has seen more than two-thirds of adults receive two doses, meant the government could go ahead with step four of its roadmap out of restrictions.

“If we are careful and if we continue to respect this disease and its continuing menace then it is highly probable – almost all the scientists are agreed on this – the worst of the pandemic is behind us,” the PM said.

“There are difficult days and weeks ahead as we deal with the current wave of the Delta variant and there will be sadly more hospitalisation and more deaths but with every day that goes by we build higher the wall of vaccine-acquired immunity.”

Monday’s lifting of most coronavirus rules will see ministers seek to shift the emphasis from government diktat to people weighing up risks and taking their own decisions.

A range of guidance has been published ahead of 19 July, but ministers have been accused of sending “mixed messages” to people and businesses about what they should do beyond that date, in particular concerning face masks.

Despite the legal requirement to wear face masks on public transport and in shops being lifted, guidance for businesses issued on Wednesday states the government still “expects and recommends that people continue to wear a face covering in crowded, enclosed spaces”.

Critics have said the guidelines are a “recipe for chaos”, but the PM said businesses were “perfectly capable” of understanding new guidance on face coverings and guidelines.

“We are moving away from legal compulsion but we are saying that of course the pandemic is not over and sadly people have to remain cautious,” he said.