Charlie Crist has an extensive political history in Florida and is widely known throughout the state. But his candidacy is not likely to deter other Democrats like Val Demings and Nikki Fried. 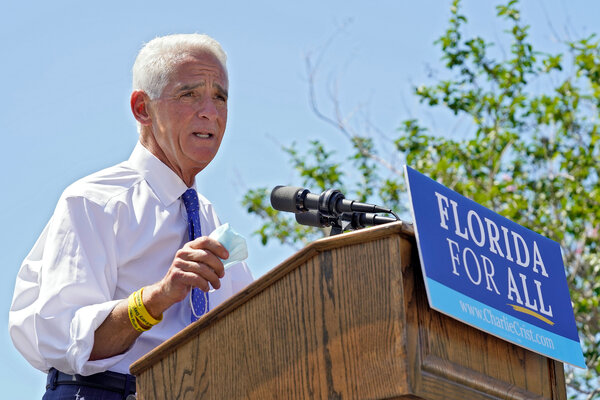 MIAMI — Representative Charlie Crist, Democrat of Florida, entered the race for governor on Tuesday, becoming the first challenger to Ron DeSantis, a Republican who raised his profile by shunning lockdowns during the pandemic and is now a leading contender for his party’s presidential nomination in 2024.

“Every step of the way, this governor has been more focused on his personal political fortune than the struggle of everyday Floridians,” Mr. Crist said under the blazing sun in St. Petersburg as he made his announcement. “That’s just not right. Just like our former president, he always takes credit but never takes responsibility.”

His candidacy signaled the start of a long, expensive and most likely bruising campaign in a battleground state that has been swinging away from Democrats since 2016. Florida’s exceptionally tight governor’s races have been decided by around one percentage point since 2010, always in Republicans’ favor. The last Democrat to win election to the governor’s mansion was Lawton Chiles, who won a second term in 1994.

Mr. Crist’s advisers see him as the Democrat with the most experience running statewide and appealing to a coalition of liberal and moderate voters in the way that President Biden did nationally — though not in Florida, which former President Donald J. Trump won by three percentage points.

Mr. Crist has an extensive political history in Florida and is widely known throughout the state. He served as governor as a Republican from 2007 to 2011 before running unsuccessfully for the U.S. Senate as an independent, losing to Marco Rubio. After switching parties, he later lost a Democratic bid for governor in 2014 against the Republican incumbent, Rick Scott.

The arc of his political evolution was evident in the video he used on Tuesday to announce his candidacy. It featured footage of the hug with former President Barack Obama that led to Mr. Crist’s departure from the Republican Party 11 years ago.