Home » ‘Cummings is a bitter man!’ Hancock should NOT resign after Covid allegations, says poll

On Wednesday, Mr Cummings gave evidence to a joint inquiry of the Commons Health and Social Care and Science and Technology Committee and made a number of potentially serious allegations against Mr Hancock. The former top adviser, who left his role earlier this year, claimed he told the Prime Minister the Health Secretary should be sacked over his failings with managing the Covid pandemic. Mr Cummings insisted there were around 20 reasons Mr Hancock – whose department he has previously described as a “smoking ruin” – should have been given the boot.

Downing Street did not deny that Mr Johnson considered sacking Mr Hancock in April last year but insisted the Prime Minister has confidence in the Health Secretary now.

Mr Cummings also accused Mr Hancock of “criminal, disgraceful behaviour” by interfering with the NHS test and trace system to hit his “stupid” 100,000 daily target while Mr Johnson was in hospital with coronavirus.

The latest Express.co.uk poll, which ran from 3pm on Wednesday May 26 until 1.30pm on Thursday May 27, asked: “Should Matt Hancock resign after Dominic Cummings’ devastating new Covid allegations?” 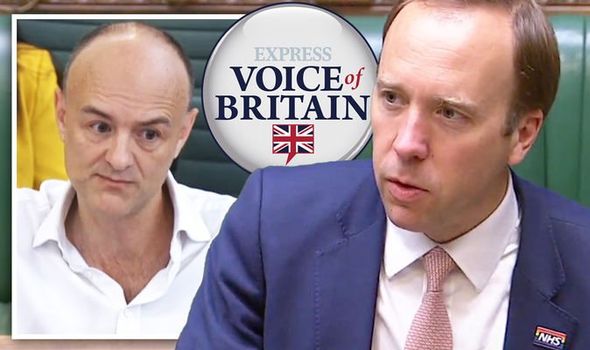 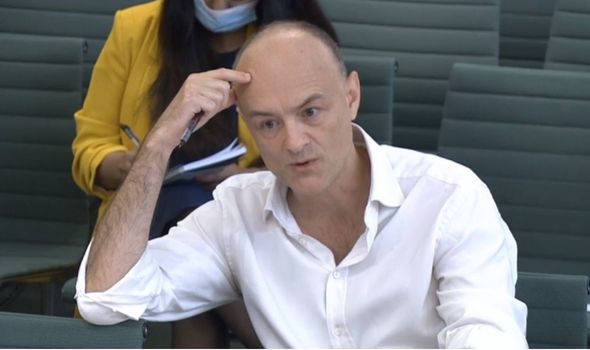 Nearly three quarters of people who took part in the poll (73 percent or 9,017 readers) said the Health Secretary should not be fired following the explosive claims made against him.

Just over a quarter (26 percent or 3,173 readers) said Mr Hancock should be sacked, while the remaining one percent (125 readers) were undecided.

Reacting to our original story, one Express.co.uk reader fumed: “Cummings is a bitter man who cannot be trusted to recollect accurately.

“His evidence is not reliable and there is nothing of substance to back him up.” 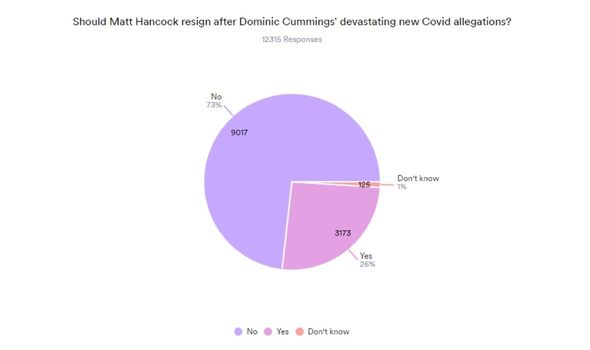 A second person wrote: “Of course he shouldn’t resign purely because some egotistical bloke with sour grapes, says so.”

Another reader added: “I wouldn’t believe what Cummings says this man has an agenda because he was kicked out.”

Speaking before the committee on Wednesday, Mr Hancock told MPs: “I think the Secretary of State for Health should’ve been fired for at least 15, 20 things, including lying to everybody on multiple occasions in meeting after meeting in the Cabinet room and publicly.

“There’s no doubt at all that many senior people performed far, far disastrously below the standards which the country has a right to expect. 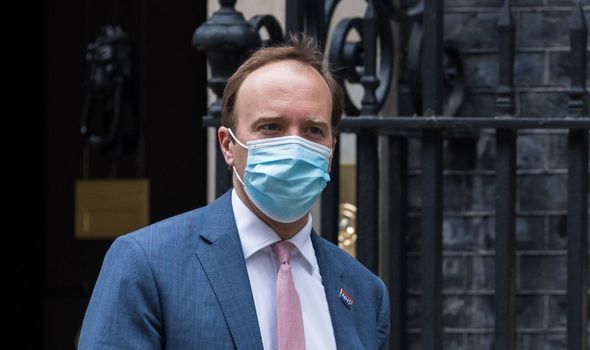 “I think the Secretary of State for Health is certainly one of those people.

“I said repeatedly to the Prime Minister that he should be fired, so did the Cabinet Secretary, so did many other senior people.”

He added: “In my opinion, disastrously, the Secretary of State had made, while the Prime Minister was on his near-death bed, his pledge to do 100,000 by the end of April.

“This was an incredibly stupid thing to do because we already had that goal internally.

“What then happened, when I came back around the 13th (of April) was I started getting calls, and No 10 were getting calls, saying Hancock is interfering with the building of the test and trace system, because he’s telling everybody what to do to maximise his chances of hitting his stupid target by the end of the month. 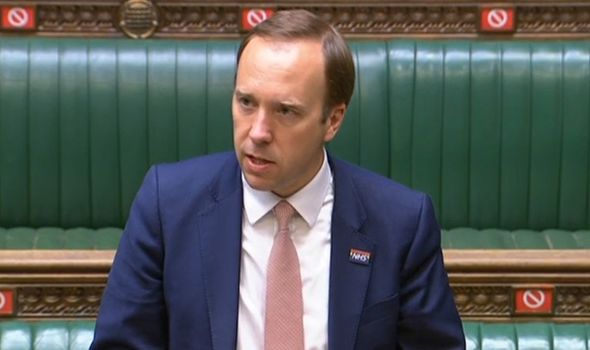 “We had half the Government with me in No 10 calling around frantically saying do not do what Hancock says, build the thing properly for the medium term.

“And we had Hancock calling them all saying, down tools on this, do this, hold tests back so I can hit my target.

“In my opinion, he should’ve been fired for that thing alone, and that itself meant the whole of April was hugely disrupted by different parts of Whitehall fundamentally trying to operate in different ways completely, because Hancock wanted to be able to go on TV and say ‘look at me and my 100K target’.

“It was criminal, disgraceful behaviour that caused serious harm.”

But speaking in the House of Commons earlier today (Thursday), Mr Hancock furiously denied the claims made against him by Mr Cummings, and said: “These unsubstantiated allegations around honesty are not true.

“I’ve been straight with people in public and in private throughout.”

Answering an urgent question in the Commons, Mr Hancock added: “Every day since I began working on the response to this pandemic last January, I’ve got up each morning and asked ‘What must I do to protect life?’

“That is the job of the Health Secretary in a pandemic.

“We’ve taken an approach of openness, transparency and explanation of both what we know and of what we don’t know.”