The Florida governor appears intent on picking up the reins of Donald Trump’s political movement, even though there is no sign that the former president is willing to relinquish his grip.

This article is part of our Midterms 2022 Daily Briefing 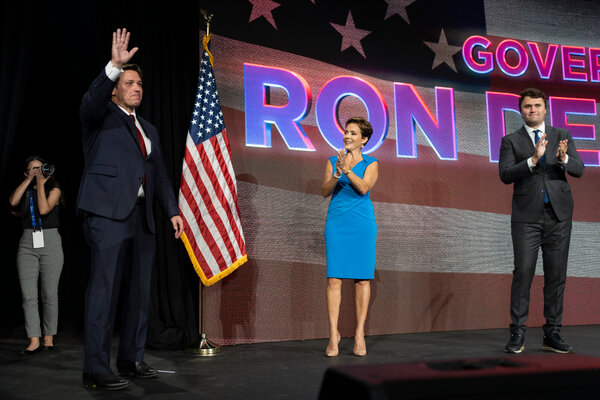 By Trip Gabriel and Patricia Mazzei

PITTSBURGH — Gov. Ron DeSantis of Florida, widely seen as the Republican who poses the biggest threat to Donald J. Trump if they both run for president in 2024, is set to visit Pennsylvania and Ohio on Friday during a national tour with hard-right candidates that appears to be intended to elevate his standing and earn political capital with potential future leaders in battleground states.

As he aims to wrest control of the conservative movement, Mr. DeSantis is appearing with some of its highest-profile and most incendiary figures — midterm candidates who, unlike him, have relentlessly pushed the fiction that the 2020 election was stolen. His rallies on Friday for Doug Mastriano, the Republican nominee for governor of Pennsylvania, and J.D. Vance, the party’s choice for Senate in Ohio, come five days after an event for Kari Lake, the G.O.P. pick for governor of Arizona, and Blake Masters, the nominee for Senate there.

The catch: All of these candidates identify with Mr. Trump’s “Make America Great Again” movement and have his endorsement.

That leaves Mr. DeSantis walking a fine line as he tries to build alliances with Mr. Trump’s chosen 2022 candidates while simultaneously conveying the message that the Republican Party does not belong only to the former president.

Mr. DeSantis and his allies may see a political opening in Mr. Trump’s mounting legal problems. But at the same time, the former president is widely expected to embark on a third run for the White House, and the investigations surrounding him have prompted Republicans to circle wagons around their embattled leader, reaffirming his power over the party.

Supporters of Mr. DeSantis believe he can appeal to many Republicans as a figure who fights the same cultural battles as Mr. Trump but without the chaos and with the ability to win over some moderate voters beyond the party’s base.

A New York Times/Siena College poll last month found that Mr. DeSantis was the clear second choice among Republican voters, with Mr. Trump garnering 49 percent support in a hypothetical 2024 presidential primary and the Florida governor earning 25 percent. No other Republican was in double digits.

On Tuesday, Florida Democrats will decide whether to nominate Representative Charlie Crist or Nikki Fried, the state’s agriculture commissioner, to challenge Mr. DeSantis in November. Mr. DeSantis’s national profile has allowed him to raise more than $130 million in campaign cash, making him a formidable incumbent.

Democrats know they face long odds to defeat him, but they have recently begun to believe there is a path to do so, in part because of voter frustration over the elimination of federal abortion rights and a new Florida law restricting abortions after 15 weeks of pregnancy.

On Friday, Mr. DeSantis, who did not immediately respond to a request for comment, will appear in Pittsburgh with Mr. Mastriano and then speak at an event outside Youngstown, Ohio, with Mr. Vance. On Sunday, he campaigned in Arizona with Ms. Lake and Mr. Masters, as well as in New Mexico with Mark Ronchetti, the Republican nominee for governor, and Representative Yvette Herrell.

More Coverage of the 2022 Midterm Elections

In Arizona, Mr. DeSantis highlighted legislation he has signed in Florida, took jabs at President Biden and Democratic leaders in Congress, and attacked the F.B.I.’s recent search of Mr. Trump’s home in Florida — though, as in his other recent remarks, he was careful to criticize investigators rather than defend the former president’s actions.

“They’re enforcing the law based on who they like and who they don’t like,” he said. “That is not a republic. Well, maybe it’s a banana republic when that happens.”

His appearances have been organized by Turning Point Action, a conservative youth group led by Charlie Kirk, 28, who is close to the Trump family and has been a leading purveyor of misinformation about topics including the coronavirus pandemic, the 2020 election and climate change.

Mr. Mastriano, who is shoring up Republican support in Pennsylvania despite struggling in recent polls, is a prominent proponent of conspiracy theories about the 2020 election. His campaign was recently swept by controversy over efforts to recruit supporters on the social media site Gab, a haven for white nationalists and antisemites.

Mr. Mastriano’s Democratic opponent, Josh Shapiro, began airing ads this week invoking the man accused of killing 11 worshipers at the Tree of Life synagogue in Pittsburgh in 2018, after posting antisemitic vitriol on Gab. Mr. Mastriano distanced himself from Gab last month, saying he rejected “antisemitism in any form.”

Jewish Democratic leaders in Florida criticized Mr. DeSantis’s planned appearance with Mr. Mastriano in the same city as the Tree of Life synagogue.