Home » Politics » Driver Rams Into Officers at Capitol, Killing One and Injuring Another

WASHINGTON — The band of razor wire-topped fencing around the Capitol had recently come down. The heavy National Guard presence had begun to thin.

But on Friday, not quite three months after the deadly Jan. 6 riot at the Capitol, a car came careening midday onto the Capitol grounds, slamming into two Capitol Police officers and leaving one of the them dead and the other injured.

This time, the source of the violence was not an angry pro-Trump mob, but a lone driver, armed with a knife, who had recently told friends he had left his job and had “afflictions.” After crashing his car and menacing officers, he was shot and killed.

“It is with a very, very heavy heart that I announce one of our officers has succumbed to his injuries,” Yogananda D. Pittman, the acting Capitol Police chief, said during a news conference near the scene. “This has been an extremely difficult time for U.S. Capitol Police, after the events of Jan. 6 and now the events that have occurred here today.”

The attacker “exited the vehicle with a knife in hand” and began “lunging” at the officers, Ms. Pittman said at a news conference near the scene of the attack. The suspect was subsequently identified by a senior law enforcement official as Noah R. Green, 25.

Investigators said they did not know a motive, but did not believe it was “terrorism related,” Robert J. Contee, the acting chief of the Washington Metropolitan Police Department, told reporters. Congress was not in session on Friday, as lawmakers were scattered around the country for the holiday weekend.

Chief Contee said that it appeared the driver had not been previously known to his agency or to Capitol Police. On the driver’s Facebook page, which has since been taken down, Mr. Green described himself as a supporter of the Nation of Islam leader Louis Farrakhan and said he had been struggling through the last few months of the pandemic. He said he had recently left his job and been “faced with fear, hunger, loss of wealth and diminution of fruit.”

The police identified the dead officer as William Evans, an 18-year member of the force. Officer Evans was the second member of the force to die in the line of duty this year; another, Brian D. Sicknick, died from injuries suffered during the Jan. 6 attack, while a third died by suicide in its aftermath. Nearly 140 officers were injured that day.

The second officer struck by the car on Friday was said to be in stable condition at a nearby hospital. 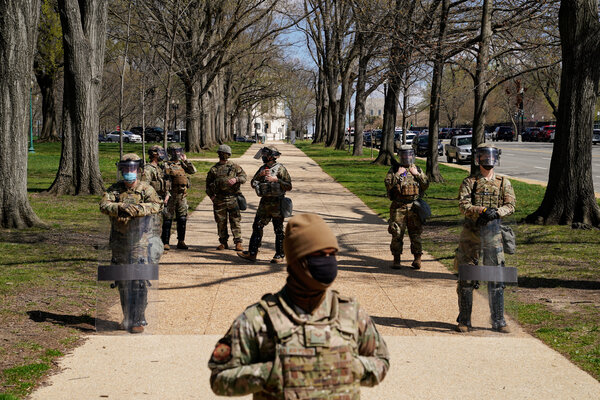 President Biden ordered flags at the White House to be flown at half-staff in honor of Officer Evans, and Speaker Nancy Pelosi ordered the same at the Capitol complex.

“We send our heartfelt condolences to Officer Evans’s family, and everyone grieving his loss,” Mr. Biden, who served in the Senate for 36 years, said in a statement. “We know what a difficult time this has been for the Capitol, everyone who works there, and those who protect it.”

Senator Mitch McConnell of Kentucky, the Republican leader, said Officer Evans’s name would “go down in history for his selfless sacrifice.”

The violence came on a quiet afternoon just as the Capitol had seemed to be getting back to normal after the trauma of Jan. 6, the most violent attack on the Capitol in two centuries, and months of heightened security measures.

In a matter of minutes on Friday, the entire complex was put on lockdown for over an hour, as reporters and Capitol staff were left to press up against windows to catch sight of the unfolding chaos with little information about the scale of the threat.

A helicopter swept across the plaza in front of the Capitol, landing only feet away from the building. At least one of the officers was medevacked to a hospital, according to law enforcement officials, and a National Guard quick-response team and the local police were on hand at the already heavily fortified complex.

Capitol Police had only recently removed a perimeter fence topped with razor wire that had been put in place to foil follow-up attacks after the riot, and reopened streets around the building. On Friday afternoon, officers rushed to put the entire Capitol building on lockdown and re-close Constitution Avenue.

For hours after the crash, the blue sedan remained wedged against the barricade, which protects the driveway that senators use daily when Congress is in session to drive to and from the Capitol.

It was towed late Friday afternoon. But lawmakers said the attack was a reminder that the Capitol is still not secure.

“This rips the scab off, and continues to provide a level of uncertainty and worry about the workplace and what’s happened there,” Representative Tim Ryan, Democrat of Ohio and the leader of a subcommittee that funds the Capitol Police, said at a news conference. “This is very personal for so many of us.”

The motivation of the suspect remained a mystery. On Facebook, Mr. Green had posted speeches and articles written by Mr. Farrakhan and Elijah Muhammad, who led the Nation of Islam from 1934 to 1975, that discussed the decline of the United States. Two law enforcement officials confirmed that the Facebook page, which was taken down on Friday, had belonged to Mr. Green.

He had posted on Facebook about his personal struggles, especially during the pandemic.

He also spoke on Facebook about the “end times” and the anti-Christ. On March 17, he posted a photograph of a donation he had made to the Norfolk, Va., chapter of the Nation of Islam, along with a video of a Mr. Farrakhan speech titled, “The Divine Destruction of America.”

Later that day, he encouraged his friends to join him in studying the teachings of Mr. Farrakhan and Mr. Muhammad.

The Nation of Islam is a Black nationalist movement that has advocated African-American self-sufficiency. It has been condemned by the Southern Poverty Law Center for “the deeply racist, anti-Semitic and anti-gay rhetoric of its leaders,” including Mr. Farrakhan.

For the Capitol Police and the lawmakers, the latest violence will complicate a top-to-bottom security review already underway and debates over how Congress should balance security and public access to the Capitol.

Top congressional leaders dismissed all of Congress’s top security officers in the days after the January riot and have begun hearings and investigations to better understand what happened and what is needed to keep the Capitol complex safe going forward.

A task force appointed by Ms. Pelosi and led by Lt. Gen. Russel L. Honoré has recommended hiring more than 800 Capitol Police officers, developing mobile fencing around the complex and changing the opaque board the oversees the police force to allow the chief of the agency to quickly summon the National Guard during an emergency.

Defense Secretary Lloyd J. Austin III approved more than 2,200 National Guard troops to remain in Washington through May 23, and Ms. Pelosi and Senator Chuck Schumer, Democrat of New York and the majority leader, hired former military leaders to be in charge of each chamber’s security.

But many members — particularly Republicans — have pushed for security procedures to be relaxed, and Capitol Police have begun taking down some of the security fencing around the outer perimeter of the complex, easing up on checkpoints and allowing cars to drive closer to the halls of Congress.

Some Democrats said that Friday’s events had confirmed their fears that easing security too soon could leave the grounds vulnerable to attack.

“I recognize that the fence is a disturbance,” Mr. Ryan said. “It’s an eyesore. It sucks. Nobody wants that. But the question is, is the environment safe enough to be able to take it down?”

He said that lawmakers were exploring the security practices at other capitals — including a call with Israeli officials about how they protect the Knesset — as part of potential permanent security changes on the complex.

“I think everything is going to be re-evaluated after today,” he said.