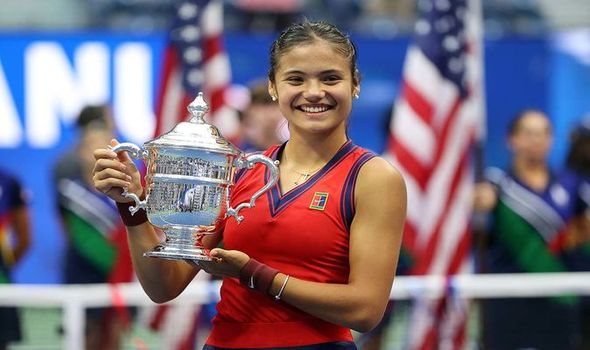 The funding is Culture Secretary Nadine Dorries’s first announcement since she joined the Cabinet, with £22million coming from the taxpayer and £8.5million from the Lawn Tennis Association. It comes as a further £30million a year was announced by new Education Secretary Nadhim Zahawi, to spruce up and build new sports facilities in schools in England.

It is hoped the new funding to revive the country’s tennis courts, including 1,500 that are council-owned, will build on Raducanu’s US Open success.

Miss Dorries said: “The whole country watched in awe as Emma Raducanu succeeded in winning the US Open.

“I want more people to follow in Emma’s footsteps and find success on the court, whether that’s winning an international tournament or picking up a racket to keep fit. That’s why we’re investing £22million to repair and improve access to park tennis courts.”

Scott Lloyd, chief executive of the LTA, said: “This programme will be transformational for public tennis facilities.

Alongside the money the LTA is putting in, this additional Government investment will allow us to repair and refurbish dilapidated courts across the country.”

Regarding the second announcement, Mr Zahawi said: “Sport plays such a vital role in the education of our children. It helps to build character and broaden their opportunities. This funding shows we are serious about improving access to quality sports facilities to keep kids active. We know the next Harry Kane and Emma Raducanu are out there, but they need the right facilities and support to display their talent.”

Park tennis courts are some of the most accessible for those wanting to play, yet 45 percent are in need of investment.