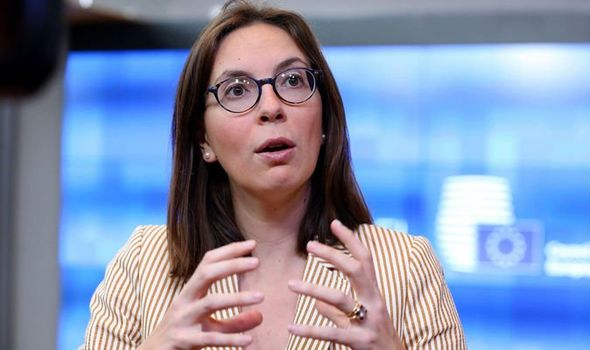 She spoke out a day after the Government confirmed Mr Johnson will scrap the talks in June unless serious progress has been made towards the Canada-style free trade deal he wants. UK and EU negotiators are due to begin the first round of discussions on a future cross-Channel trade deal in Brussels on Monday with a swathe of issues including fisheries, goods and services, transport and energy on the agenda.

In one potential flashpoint, the issue of a “level playing field for open and fair competition” was included on the agenda released yesterday despite the Prime Minister’s rejection of Brussels regulations continuing in the UK after the post-Brexit transition ends on December 31.

Speaking at the Chatham House foreign policy think tank, she claimed the EU would “not accept time pressure” and is “not ready to sign any kind of a deal on December 31 at 11pm.”

Mme de Montchalin said: “We cannot let our level of ambition be affected by what I would call artificial deadlines,” she said.

“If the UK decides to shorten the negotiating period, it will be the UK’s responsibility.

“It will not be our choice on the European side, and that choice will have consequences in terms of the breadth and depth of the relationship we can build.”

She added: “For us substance is much, much more important than deadlines.”

The UK’s guidelines for the negotiations, which cover trade and other aspects of the future relationship with Brussels, set the deadline for progress against a backdrop of deep divisions between the two sides over issues including fish, state subsidies and standards.

Mme de Montchalin also spoke of the importance of trust in the negotiations.

She said: “A swift negotiation could be impacted by a degrade in implementation of the former agreement which we just reached three months ago – the Withdrawal Agreement.

“Ensuring that our citizens are protected and are never bargaining chips in the future. Ensuring that the Northern Ireland protocol is fully implemented is for us an absolute priority.”

Plans for the negotiations published yesterday showed the talks will alternate between Brussels and London with sessions held every two to three weeks.

The official terms of reference for the negotiations also confirmed the talks will be mainly held in English with the EU funding any translation costs when documents written in French are referred to.

“Negotiations shall be conducted in English and in duly justified circumstances in French.

“Interpretation from and into French will be provided at the expense of the party using French,” the terms of reference said.

The two negotiating teams will be split into a series of groups to focus on different issues such as fisheries, transport and energy to accelerate the process.