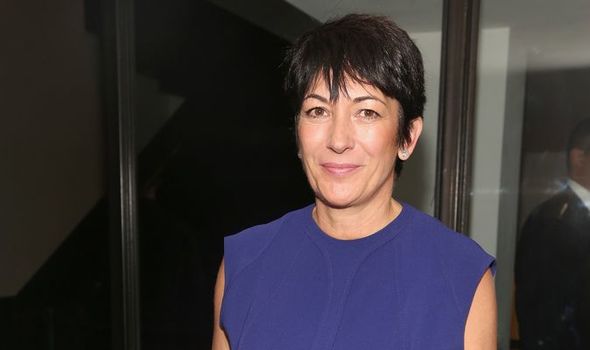 Juan Alessi, 72 – who worked for Maxwell’s billionaire partner-in-crime Jeffrey Epstein, from 1990 until 2002 – branded the disgraced British socialite “the Devil”. And he insisted she knew what her paedophile pal was up to. Juan, who appeared for the prosecution at Maxwell’s trial, said he drove her to her first meeting with Virginia Giuffre – the woman suing Prince Andrew.

He revealed how life inside Epstein’s Palm Beach mansion took a sinister turn under Maxwell’s dark influence. In an exclusive interview, the former butler told the Daily Express: “She was the Devil. She was a terrible person. She absolutely knew what Epstein was doing. She was the one finding girls for him.”

Maxwell is now facing up to 65 years in jail after she was found guilty of five charges relating to recruiting, grooming and trafficking teenage girls for former boyfriend Epstein, who killed himself in prison in 2019.

The girls were coerced into taking part in sexual massages with the twisted financier – which sometimes involved Maxwell. But years before she went on trial in New York, Juan said he told detectives how she spent “whole days” tracking down girls. They included Ms Giuffre, who Maxwell picked up from Mar-a-Lago – Donald Trump’s Palm Beach estate – where the then teenager was working.

Juan said: “One time she had me drive her to Mar-a-Lago looking for girls, and that is when she found Virginia. The whole day she spent recruiting girls. I was the one driving. I would drive the car, go to this massage parlour. She would go in, take the cards. Business cards. It was strange because she was procuring women for this guy. She was supposed to be his number one. I’d call up my wife and say, ‘Something is going on here.’ I only saw two young girls in the house – Virginia and a girl who went on to become an actress. That’s the only two underage girls. And why did I know they were underage? Because I had to go to school to pick them up.”

The actress Juan refers to gave evidence at Maxwell’s trial under the pseudonym “Jane”. Juan testified he met her in 1994. He told the court: “I don’t know exactly how old she was, but she appeared to be young. I would say 14, 15.”

Like Ms Giuffre, Jane was paid $200 each time she visited Epstein’s home for sexualised massages. Juan admits he was suspicious, but claims he had no idea why the girls were being paid. “I used to go to the bank, withdraw $10,000 and pay the girls in cash. I’d pay them out of petty cash and fill out a receipt,” he said.

Recalling his first meeting with Ms Giuffre, he added: “The day I saw her at Mar-a-Lago, Ghislaine brought her in to talk to her. I told my wife, ‘Watch – this girl is going to be here either tonight, tomorrow, that afternoon.’ And at five o’clock, she was there. She was abused as a child. As far as I know, she was having a massage. She never said, ‘Juan, I wish I would have told you as I know you’d have done something.’ I am a father. I would have punched the s*** out of this guy. I would have said, ‘I’m leaving. I’m going to the police.’ I believe what Virginia is saying, although I do not know the truth about what happened between her and Andrew. I never saw Andrew and Virginia together.”

But Juan urged the prince, who denies her claims of sexual abuse, to speak to the FBI “to clear himself” of any involvement in Epstein and Maxwell’s vile activities. At Maxwell’s trial, prosecutors showed the court a “household manual”. It was created for staff by Maxwell, who moved in with Epstein in the 1990s. Juan testified he had taken the instructions in it as “a kind of warning”.

One read: “Remember that you see nothing, hear nothing, say nothing except to answer a question direct to you.” Other demands read: “Try to anticipate the needs of Mr Epstein, Ms Maxwell and their guests; Do not discuss personal problems with guests; Unobtrusive is the key; SMILE! and NEVER disclose Mr Epstein or Ms Maxwell’s activities or whereabouts to anyone.”

Juan said: “After Ghislaine came into the picture, everything changed. He [Epstein] had been the nicest guy around. He would come in and talk to me – talk to me about soccer. She changed him. I would find sex toys in her sink. I took it as a perversion, not an abuse. He was nasty because of her. At the end of my tenure, I could not look at his eyes. Ghislaine said I was not to look at him or his guests in the eyes. I had to look down at all times. She would call me and say you are not allowed to talk to any of the guests, any of the girls…a senator or politician, a celebrity. They all knew me by my name. She would wave her hand and just bat us away as though we were nothing. Second-class citizens.”

ONE possible reason to explain why the jury in the Ghislaine Maxwell case took five full days before finding the socialite guilty is the widespread belief that women are less capable of sex crimes then men. However, psychologists are now beginning to doubt whether this is true.

Perhaps the most infamous sex crimes and killings in UK legal history are the Moors murders, perpetrated by Ian Brady and his girlfriend Myra Hindley. The victims were five children, four of whom were also sexually assaulted.

The figures vary depending on which study you examine but, roughly speaking, just over 70 percent of female sex offenders act in conjunction with others, usually men. By contrast, a little over 80 percent of male perpetrators act alone.

There are two major types of female offender: “passive” or “indirect” perpetrators who witness sexual abuse but do not intervene, including those who secure potential victims for their male accomplices. Then there are “active” or “direct” perpetrators, who participate directly in abuse.

Research into female sex offenders reveals an extremely high incidence of physical, emotional and sexual abuse in their own childhoods and more recent personal lives, including high rates of domestic violence. These are women often raised and living in poverty with poor educational attainment.

Although there is no doubt crooked media baron Robert Maxwell was a tyrant and a bully, this does not appear relevant to the case of his daughter. Indeed, none of these appear to have been raised by the defence as mitigating factors.

But a study from Oakland University in the US has uncovered a link between narcissistic personalities – those suffering grandiosity, superiority, vanity, self-absorption and entitlement – and arousal from sexually aggressive acts.

Ghislaine Maxwell and Jeffrey Epstein were wealthy socialites and shouldn’t have found it difficult to engage in sexual liaisons. This research has found it is the thirst for power and domination over others that delivers the sex kick for the narcissist. Previous studies found female narcissists were more likely than men to engage in aggressive sexual behaviour.