Home » Politics » Have Your Say: EU warns UK to ‘dial down’ on threat of Brexit talks walk-out – should we? 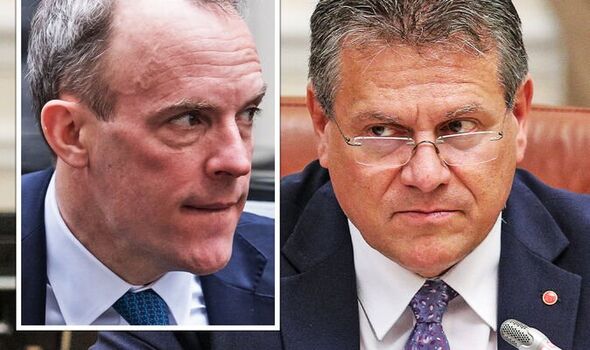 You can add your voice to the tens of thousands of comments posted daily on Express.co.uk and have your say on the big issues facing the country today.

The Deputy Prime Minister made the comments on Sky News where he added the outcome from the recent election in Northern Ireland “makes it clear” that an agreement “can’t be put off”.

During the weekend the nationalist party Sinn Fein, who are opposed to changes being made to the existing protocol, became the largest political entity in Northern Ireland.

Negotiations between the UK and the European Union (EU) are currently at a deadlock with the UK insisting all options remain on the table, including the possibility of unilaterally scrapping elements of the deal.

In response, EU Commission Vice President Maros Sefcovic blasted: “The EU has already shown a lot of flexibility by proposing impactful, durable solutions and we stand ready to continue discussions.

“We need the UK Government to dial down the rhetoric, be honest about the deal they signed and agree to find solutions within its framework.”

So, do you agree that if a deal can’t be reached soon, Britain should walk away from the talks?

HAVE YOUR SAY RIGHT NOW – JOIN THE EXPRESS READER DEBATE IN OUR COMMENTS SECTION.