Home » Politics » Have Your Say: Farage says there’s no ‘equity’ in sanctioning oligarchs – do you agree? 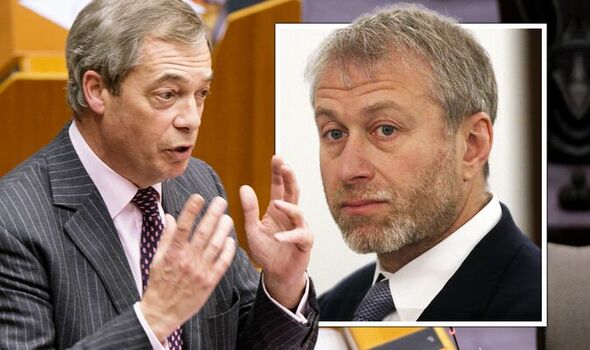 You can add your voice to the tens of thousands of comments posted daily on Express.co.uk and have your say on the big issues facing the country today.

Mr Farage made the comments after Chelsea Football Club owner Roman Abramovich was announced as part of another oligarch group to be hit with sanctions by the UK.

Speaking on his daily GB News programme, Mr Farage said: “The reason that’s been given is that he has ties to Vladimir Putin, he himself rejects that.

“Either way, I’m beginning to ask myself the question, ‘what are we trying to do?’”.

The 57-year-old was quickly shut down by his guest, the former Millwall FC chairman Theo Paphitis.

Mr Paphitis said: “There’s no due process about moving into Ukraine and bombing innocent civilians. So don’t give me the due process.”

Does Mr Farage have a point and should the UK be aiming its sanctions elsewhere?

HAVE YOUR SAY RIGHT NOW – JOIN THE EXPRESS READER DEBATE IN OUR COMMENTS SECTION.