The measure would stave off a government shutdown, providing funding until Dec. 11. 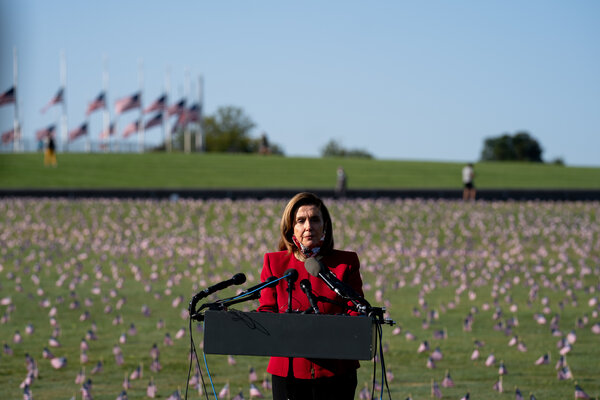 WASHINGTON — The House approved a stopgap spending bill after Democratic congressional leaders and the Trump administration reached a deal on Tuesday to avert a government shutdown next week and extend funding through Dec. 11, agreeing to include tens of billions of dollars in additional relief for struggling farmers and for nutritional assistance.

With Congress unable to reach agreement on the dozen annual spending bills required to keep the government funded when the new fiscal year begins on Oct. 1, the legislation would still need the support of both the Senate and President Trump in order to become law and avoid a shutdown. The House cleared the two-thirds threshold needed to approve the measure, 359 to 57. One Democrat, Representative Alexandria Ocasio-Cortez of New York, voted present.

The measure had been mired in a dispute between Democrats and the White House over Mr. Trump’s demand to include tens of billions to extend the borrowing limit of the Commodity Credit Corporation, which provides loans to farmers and which some Democrats feared Mr. Trump was using as a personal piggy bank to curry favor with a politically crucial bloc of voters and reward other powerful constituencies.

Having failed to strike an agreement on Friday, Speaker Nancy Pelosi of California and Steven Mnuchin, the Treasury secretary, revived negotiations and ultimately agreed to include the agricultural funding with a provision that it could not be used for payments to fossil fuel importers and refiners. They also agreed to include nearly $8 billion in nutrition assistance for schoolchildren and families demanded by Ms. Pelosi.

House Democratic leaders had initially sought to advance the bill without the Commodity Credit Corporation money. But lawmakers in both parties balked at the omission, arguing that it was a critical resource for farmers across the country and helped fund a series of bipartisan programs. Moderate Democrats who count farmers and agriculture businesses as significant constituencies within their districts lobbied Ms. Pelosi to reconsider.