Home » Politics » How Biden United a Fractious Party Under One Tent

For years, Bernie Sanders and Joseph R. Biden Jr. wrestled over the Democratic Party’s future in a public tug of war that spanned three elections, two administrations and one primary contest.

But when Mr. Sanders walked into his first Oval Office meeting with the new president last week and saw the large portrait of Franklin D. Roosevelt opposite the Resolute Desk, the liberal luminary felt as if he were no longer battling Mr. Biden for the soul of the party.

“President Biden understands that, like Roosevelt, he has entered office at a time of extraordinary crises and that he is prepared to think big and not small in order to address the many, many problems facing working families,” Mr. Sanders said in an interview. “There is an understanding that if we’re going to address the crises facing this country, we’re all in it together.”

After a 15-month primary contest that highlighted deep divides within the party, Mr. Biden and his fractious Democratic coalition are largely holding together. United by a moment of national crisis and the lingering influence of his predecessor, the new president is enjoying an early honeymoon from the political vise of a progressive wing that spent months preparing to squeeze the new administration.

Democrats have remained resolute about pushing through Mr. Biden’s $1.9 trillion coronavirus rescue plan over near-unanimous dissent from Republicans, and they are determined to hold former President Donald J. Trump accountable for his role in the Jan. 6 Capitol violence in the impeachment trial that starts Tuesday.

Liberal standard-bearers like Mr. Sanders and Senator Elizabeth Warren of Massachusetts are holding their fire. The progressive “Squad” in the House — Representative Alexandria Ocasio-Cortez of New York and her allies — have focused their rage on the Republicans who inspired the siege of the Capitol.

And activists who have built careers out of orchestrating public pressure campaigns have been disarmed by the open line to the White House they enjoy, and by the encouragement they receive from its highest levels — a signal that the administration is tending to the Democratic base in a way that wasn’t done during the Obama or Clinton years.

The moment of unity could be fragile: Sharp differences remain between Mr. Biden and his left flank over issues like health care, college costs, expanding the Supreme Court and tackling income equality. A battle looms over whether to prioritize a $15 per hour minimum wage in the administration’s first piece of legislation; the debate flared anew on Monday when a report from the Congressional Budget Office said the $15 level would significantly reduce poverty but cost hundreds of thousands of jobs.

Yet in the embryonic stage of the Biden administration, Democrats appear to be largely coexisting under their big tent.

Even Mr. Biden’s decision to hold his first high-profile White House meeting with Republican senators, and not Democrats, didn’t faze progressives who urged him to stand firm in the face of efforts to whittle down his $1.9 trillion stimulus package.

“Biden said he would reach out to Republicans,” Senator Jeff Merkley of Oregon, one of the chamber’s most progressive members, said in an interview. “He had to give it a shot.”

The harmony reflects how far Mr. Biden and his party shifted to the left during the Trump administration. During the campaign, Republicans accused Mr. Biden of being a “Trojan horse” for liberal interests. But the administration hasn’t tried to smuggle in progressive proposals; it has simply rebranded them as its own.

Elements of the Green New Deal, economic proposals and initiatives on racial equity and immigration are appearing in the executive orders and legislative plans the administration has issued.

Even party moderates like Senator Joe Manchin III of West Virginia now believe that Democrats must adopt a more aggressive approach to passing their agenda than they used a dozen years ago, when they last held full control of the federal government and spent months negotiating with Republicans. 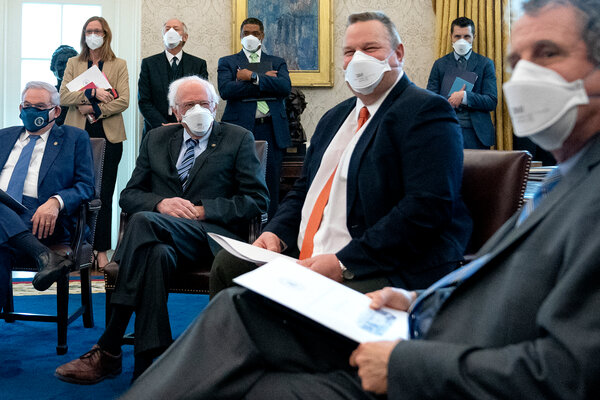 Last week, by contrast, Democrats moved toward passing their expansive coronavirus relief package through reconciliation, a fast-track budgetary process that allows the party to muscle through parts of its agenda with a simple majority vote.

Within the Democratic caucus, Mr. Biden’s team has avoided other pitfalls he witnessed during the Obama administration, when White House spokesmen dismissed activists as “the professional left” and banished intraparty critics from the administration’s circles of influence. Instead, Mr. Biden’s White House has welcomed many such critics to virtual meetings, and the chief of staff, Ron Klain, has encouraged progressive criticism on his Twitter feed.

Melissa Byrne, a progressive activist, discovered as much when she wanted to prod Mr. Biden to focus on forgiving student loan debt. To complement her steady stream of tweets, Ms. Byrne bought full-page ads in The News Journal, a newspaper that was delivered to Mr. Biden’s Delaware house daily during the presidential transition.

Ms. Byrne expected some bristling from Mr. Biden’s team over her public protests. Instead, her efforts were encouraged. Mr. Klain told her to keep up the pressure, inviting her to more Zoom meetings with the transition team.

“We just kept being able to have people at the table,” she said. “That showed me that we could do cool things like sit-ins and banner drops, but we could also be warm and fuzzy.”

The singular focus on the pandemic has enabled Mr. Biden to align the central promise of his campaign — a more effective government response — with the priorities of party officials in battleground states, who say that voters expect Mr. Biden to deliver a competent vaccine distribution along with direct economic relief. Already, there is widespread agreement within the party that Democrats will be judged in the 2022 midterms and the 2024 presidential contest by their handling of the twin crises.

“Needles and checks — that’s got to be the focus,” said Thomas Nelson, the executive of Wisconsin’s Outagamie County. Mr. Nelson was a Sanders delegate in 2020 and is running in the 2022 election for the seat held by Senator Ron Johnson, a Republican. “People in my county, we need those checks.”

Mr. Biden has also paid attention to other policy matters. He has signed about 45 executive orders, memorandums or proclamations enacting or at least initiating major shifts on issues including racial justice, immigration, climate change and transgender rights.

While his inner circle is largely composed of long-serving aides, he has placed progressives in influential administrative posts. He has also avoided selecting figures reviled by the left, like former Mayor Rahm Emanuel of Chicago — who was Mr. Obama’s chief of staff in 2009 — for high-profile positions.

“None of the people we were afraid of got into this cabinet,” said Larry Cohen, the chairman of Our Revolution, the political group that formed out of the 2016 Sanders campaign. “It’s fine and well for Rahm Emanuel to be an ambassador someplace.”

For the first time in his decades in Washington, Mr. Sanders is an influential inside player in governance. He is chairman of the Senate Budget Committee and speaks frequently with administration officials including Mr. Klain. He has had a number of conversations with Mr. Biden, whom he considers a friend, and said his calls to the White House were returned “very shortly.”

“He sees the progressive movement as a strong part of his coalition,” Mr. Sanders said of Mr. Biden. “He is reaching out to us and is adopting some of the ideas that we have put forth that make sense in terms of today’s crises.”

There’s plenty of overlap between Mr. Biden’s agenda and his left flank and some of the praise stems from the new president’s taking steps he had already promised during his campaign, including rejoining the Paris climate accord.

Republicans have complained that Mr. Biden is a moderate being led astray by liberals in Congress and the White House. But as Democratic ideology shifted during his decades in Washington, Mr. Biden always recalibrated his positions to remain at the middle of his party. After four years of the Trump administration, that center has shifted decidedly to the left.

While Mr. Biden took pains to separate himself from the progressive left during the campaign — “I beat the socialist,” Mr. Biden was fond of saying after he bested Mr. Sanders — he forged a rapprochement last summer when his campaign agreed to policy task forces with members appointed by Mr. Sanders.

For his part, Mr. Biden has reinterpreted his campaign promise to bring the country together into the loosest definition of the term. His aides have begun portraying it as finding broad support for their plans among voters — regardless of whether they garner the votes of any congressional Republicans.

“If you pass a piece of legislation that breaks down on party lines, but it gets passed, it doesn’t mean there wasn’t unity,” Mr. Biden said recently. “It just means it wasn’t bipartisan.”

Still, reconciliation is subject to strict limits, so fights over what policies should be pursued and how to overcome Republican opposition are likely to be unavoidable.

Battle lines are already being drawn over whether to eliminate the filibuster, which would allow the party to pass measures with a simple majority. Mr. Biden and moderate Democrats remain committed to keeping the tactic, a decision liberals say could block a robust policy portfolio.

“Everyone is trying to make the argument that their priority can move through reconciliation,” said Adam Jentleson, a former Senate aide who recently founded a new organization to help progressive groups push their agenda in Washington. “As people start to see that their thing is not going to get done that way, there will be more pressure.”

Mr. Biden’s honeymoon may be short on other issues as well. Advocates working near the Mexican border would like to see Mr. Biden flex his executive power to stop all deportations, going further than his promised 100-day moratorium, which was blocked in court.

“The feeling is really, ‘Why did we come up with all this work to come up with this plan only for you to come up with an executive order to say you’re still reviewing it?’” said Erika Pinheiro, the policy and litigation director at Al Otro Lado, a legal aid service for migrants and deportees.

Not everyone is quite as impatient. Ms. Byrne, the activist, said Mr. Biden’s executive order extending a pause on federal student loan payments until September served as a sufficient first step.

“As long as they keep doing good stuff, we will be happy,” Ms. Byrne said. “You give them a moment to operate in good faith, and you keep the cycle going.”