The Labour Party leader said the Prime Minister’s defence spending announcement lacked “strategy” as he claimed Boris Johnson failed to justify the extra spending to MPs in the Commons. But the Prime Minister blasted Sir Keir’s comments after the Labour chief claimed defence was “always at the top of Labour’s agenda”. Mr Johnson said: “From all the humbug that I’ve read from the Honourable Gentleman opposite, I think that really takes the cake.

“This is a man who campaigned until December last year to install in Government a prime minister who would have wanted to scrap our armed services and come out of NATO.

“And his own record of support for our armed services is very, very thin indeed.”

Sir Keir said that while he welcomes the additional defence funding, it is “a spending announcement without a strategy”.

Responding to the Prime Minister’s statement, he told the Commons: “Under my leadership, national security will always be Labour’s top priority.

“Britain must once again show global leadership and be a moral force for good in the world – both in how we tackle present and emerging security threats, but also in how we build a fairer, greener and more secure world. 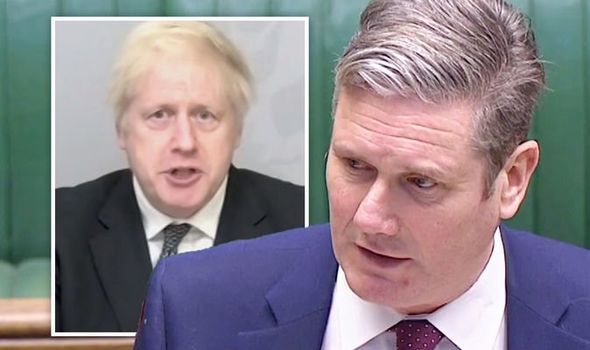 “So we welcome this additional funding for our defence and security forces and we agree that it is vital to end what the Prime Minister calls – I have to say, with complete lack of self-awareness – an era of retreat.

“But this is a spending announcement without a strategy. The Government has yet again pushed back vital parts of the Integrated Review and there is no clarity over the Government’s strategic priorities.”

The Labour leader also questioned how the additional defence spending will be paid for.

He said: “Such is the Government’s handling of this pandemic that the UK has the sharpest economic downturn of any G7 country.

“Next week the Chancellor will have to come here and set out the consequences of that. So can the Prime Minister tell us today, will the commitments he’s made require additional borrowing, mean tax rises – if so, which ones – or will the money have to come from other departmental budgets?

“In particular, at the election last year, there was a very clear Conservative Party manifesto (promise) to, and I quote, ‘spend 0.7 percent of GNI on international development’.

“So a straight question Prime Minister: Is the Government going to keep to that manifesto commitment?

“He must know that if he breaks it, that will not only undermine public trust, but also hugely weaken us on the global stage.”