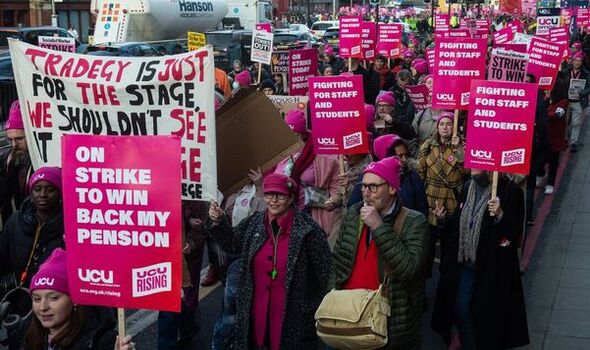 Around 2,000 troops and civil servants could be drafted on to the frontline as strikes grip the country, the Cabinet Office said yesterday.

Conservative Party chairman Nadim Zahawi said: “It is the right and responsible thing to do to have contingency plans in place.

“We have a very strong team at Cobra (civil contingencies committee) who are doing a lot of the work in looking at what we need to do to minimise the disruption to people’s lives.”

Speaking on Sky News’ Ridge on Sunday, Mr Zahawi insisted it was up to union leaders to call off the strikes and suggested they were playing into the Russian president’s agenda as he uses high energy prices fuelling inflation as a “weapon” in his war against Ukraine.

Zahawi said the government needed to show discipline in not raising public sector pay in line with inflation, which could fuel inflation further. He estimated meeting all the pay demands would cost £28bn.

Urging unions not to proceed with strike action, he added: “This is a time to come together and to send a very clear message to Mr Putin that we’re not going to be divided in this way … Our message to the unions is to say ‘this is not a time to strike, this is a time to try and negotiate’.”

Downing Street said the troops formed part of a “range of options available” if strikes go ahead but no decisions have been taken yet on their deployment.

The Cabinet Office said: “The priority over the coming weeks is to protect the public who may need access to emergency services support, and limit disruption as much as possible, particularly at a time when increased numbers of people will be travelling for the festive period and NHS services are under huge pressure due to the impact of Covid.”

Britons have been warned of a “winter of discontent” which could see rail workers, nurses, ambulance staff, postal workers, teachers and university lecturers walk out.

Ministers bracing for a wave of industrial action have trained up to 600 armed forces personnel and 700 staff from the Government’s specialist Surge and Rapid Response Team as well as other civil servants as part of the contingency plans. Some could be deployed are ports and airports in the event of strike action by Border Force staff.

Soldiers were previously drafted to deliver Covid jabs during the height of the pandemic.

Unions across public services are preparing to carry out strike action or ballot their members over pay as they attempt to soften the squeeze on living standards from soaring inflation.

Nurses in England and Wales will strike on 15 and 20 December in what is set to be their biggest walkout in the NHS’s history.

David Davis, Tory MP for Haltemprice and Howden, called it “vital” that health unions’ strikes do not threaten Britons’ lives.

He said: “The ambulance union Unison made the rather implausible claim that their strikes would not create a risk to lives. The Government is now in intensive talks to avoid just that. It is vital the health unions’ strikes do not jeopardise the lives of citizens.”

Paramedics, call handlers and other staff at half of England’s ambulance services have also voted to take strike action over pay.

Workers at Royal Mail have held eight strikes since August and have more days of action scheduled before December 25, including Christmas Eve.

Meanwhile, rail strike dates have been announced in the run-up to Christmas, following months of disruption. Thousands of RMT members across 14 train operators and Network Rail are due to stage two 48-hour strikes later this month.

The Rail Delivery Group yesterday (SUN) said it offered the Rail, Maritime and Transport union (RMT) union a pay rise of eight per cent over two years with a guarantee of no compulsory redundancies to April 2024 in a bid to head off fresh strikes.

Kate Nicholls, chief executive of UK Hospitality, warned walkouts in the run-up to Christmas could be the “final nail in the coffin” for Covid-battered businesses.

She said: “It’s going to have an absolutely devastating impact. Our workers won’t be able to get into work. Our customers won’t be able to visit. Businesses that are struggling so much as a result of two years of Vocid and lost Christmas sales will face another disrupted year of income which could be the final nail in the coffin for many of them.

“Christmas is disproportionately important to hospitality businesses because it is such a busy trading period. It is the time of year when we generate a third of all of our profits and therefore to have strike action impacting those days means businesses will be severely impacted.”

Mr Zahawi said that while he was “absolutely conscious” of how difficult it was for many workers, the country simply could not afford inflation or above-inflation pay awards.

He said rising prices were being driven by higher energy costs due to Russian president Vladimir Putin’s war in Ukraine, as he appealed to unions to drop their demands.

Mr Zahawi added: “This is not a time to be divided. We have to come together to, I hope, send a very clear message to Mr Putin that he can’t use energy as a weapon in this way.”

“If you chase inflation or above-inflation pay then you will embed inflation for longer and hurt the most vulnerable. This is not a time to strike, this is a time to negotiate.”

“To ask for a 19 percent pay rise (for nurses) which would cost the NHS £10 billion I think is the wrong thing to do right now.”

“If you accept all the inflation-level pay rises, that is about £28 billion. It would cost every household just short of £1,000. That is unsustainable when we are trying to be fiscally disciplined.”

Labour’s education secretary Bridget Phillipson could not confirm whether her party would increase pay in line with inflation in the public sector. The frontbencher said her party wants a “fair deal” for workers.

Asked whether salary increases in the public sector were affordable, she said: “I’m not going to make promises to you this morning that I don’t feel confident I can deliver – I think that’s been what’s so corrosive to our politics in recent years.”

Prime Minister Rishi Sunak, who took office about just over a month ago, is grappling with a wave of strike action, a recession predicted to last at least a year and a migrant crisis.

The Conservative Party’s rating in polls has slumped well below those of Labour, whose candidate won a by-election in Chester with a large majority earlier this week.

When asked about the result, Mr Zahawi said there was “no shying away from the fact that the internal challenges of the Conservative party has probably led to the gap in the polls”.

John O’Connell, chief executive of the TaxPayers’ Alliance, said: “The economic backdrop is bad for everyone – there are of course workers in the public sector who are struggling as a result, but it’s unfortunately the same across the board. “

“Workers in the private sector are getting a raw deal as it is, and shouldn’t be held to ransom.”

The Rail, Maritime and Transport union last night rejected an offer from the Rail Delivery Group (RDG) aimed at heading off more strikes, the union announced.

Rail employers made an offer to the biggest union in the industry in a bid to resolve a long-running dispute over jobs, pay and conditions.

The RDG said it has offered the RMT a pay rise of eight per cent over two years with a guarantee of no compulsory redundancies to April 2024.

RMT general secretary Mick Lynch said: “We have rejected this offer as it does not meet any of our criteria for securing a settlement on long term job security, a decent pay rise and protecting working conditions.”

“RMT is demanding an urgent meeting with the RDG tomorrow morning with a view to securing a negotiated settlement on job security, working conditions and pay.”

TSSA organising director Luke Chester, said: “I am glad that the Government has finally given authority to the employers to make offers in an attempt to resolve our dispute.

“We are considering the detail of these offers very carefully and will be consulting our reps tomorrow.”

“The RDG offer, in particular, contains more strings than a harp, including some which have never previously been discussed.”

“There is nothing in the offer for either managers or controllers in train operators, and our union would expect any serious offer to include all those staff covered by the dispute.”

“I have requested an urgent meeting with the RDG on Monday to understand their rationale behind making these last-minute changes and seek to address our concerns.”