The new King said he was “deeply grateful” to parliamentarians for their condolences on the loss of his “beloved mother”. He made the address in Westminster Hall, the exact same place where his mother will lie in state from Wednesday.

The historic building, which is the oldest part of the Parliamentary estate and dates back to 1097, was packed as politicians gathered to hear from the new monarch.

“Parliament is the living and breathing instrument of our democracy,” King Charles said.

“As I stand before you today, I cannot help but feel the weight of history which surrounds us, and which reminds us of the vital parliamentary traditions, to which members of both Houses, dedicate yourselves with such personal commitment for the betterment of as all.”

He added: “Parliament is the living and breathing instrument of our democracy. 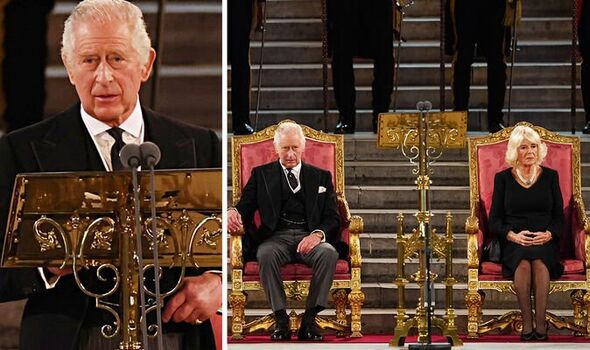 “That your traditions are ancient we see in the construction of this great hall and the reminders of mediaeval predecessors of the office to which I have been called and the tangible connections to my darling late mother we see all around us”.

All those in attendance to hear from the King were dressed in sombre clothing as they continued to pay their respects to the death of the Queen.

Addresses to MPs and peers in Westminster Hall are relatively rare. In her 70 years on the throne, Queen Elizabeth II only addressed both Houses on five occasions.

Former US President Barack Obama and South African President Nelson Mandela are among others to have been given the rare honour of speaking in Westminster Hall.

The hall was also where King Charles I, the new monarch’s namesake, was tried for treason in 1649.

Ahead of the address, Liberal Democrat leader Sir Ed Davey described the King’s appearance in Parliament as a moment of “reflection” and “great sadness”.

He told Sky News: “It’s a part of Westminster which is resplendent with history.

Following his morning’s address at Parliament, the King will now travel to Scotland to inspect a guard of honour at the Palace of Holyroodhouse before attending a ceremony of the keys on the forecourt.