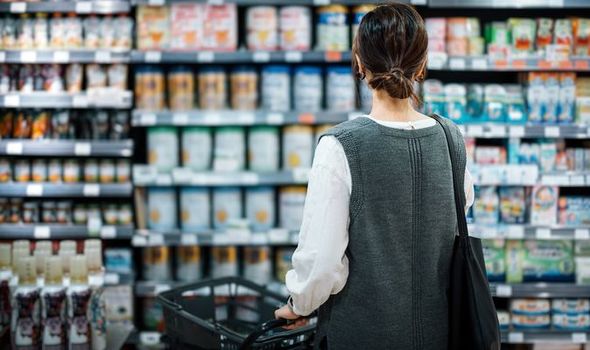 The Chancellor spoke yesterday after figures revealed inflation had surged to 5.4 per cent last month – its highest rate since March 1992 – as the nation’s cost-of-living crunch intensified. With gas and electricity costs set to rise further and Bank of England boss Andrew Bailey suggesting energy prices might not come down until 2023, experts have warned inflation could climb even higher in the coming months.

However, others say they expect inflation to begin falling in the summer and are predicting a “rosy” 2022 for the UK economy. Households have so far had their energy bills kept in check by the Government’s price cap, which limits the amount suppliers can charge. But the limit is set to be revised on April 1.

The energy industry has warned that it could mean family fuel bills surging by another 50 per cent. Mr Sunak said the Government was providing £12billion in support for struggling families in changes to the Universal Credit benefit, freezes in alcohol and fuel duties and targeted help for households.

The Chancellor added: “I understand the pressures people are facing with the cost of living. We will continue to listen to people’s concerns as we have done throughout the pandemic.”

Yesterday’s Office for National Statistics (ONS) figures showed the consumer price index measure of inflation, up from 5.1 per cent in November, was higher than expected as the price of food, furniture and clothing surged, along with restaurant and hotel bills.

Food had a year-on-year price increase of 4.2 per cent – the highest rate since September 2013 – and inflation on clothing was at a four-and-a-half-year high. That is adding to continued pressure caused by energy bill hikes seen in October and fuel prices that have climbed to record levels.

In addition, there has been a increase in demand for used cars as world chip shortages squeeze the supply of new vehicles. The ONS measured household utility bills inflation at its highest rate since November 2011.

The latest figures emerged a day after official data showed any wage rises for UK workers were already being wiped out by rocketing prices, even before the latest uptick. Meanwhile, the Bank of England is coming under increasing pressure to act to cool inflation.

Last month the Bank raised interest rates from 0.1 per cent to 0.25 per cent and experts have pencilled in another back-to-back rate increase at its next meeting in February. Mr Bailey told MPs on the Treasury Select Committee that the Bank could do little to bring down gas prices or ease disruption to the global supply chain. But he pledged it would do “whatever we can”.

However, the respected Centre for Economics and Business Research (CEBR) said it expects inflation to peak at 5.9 per cent between April and June, before easing to 3.1 per cent in the last quarter of this year.

CEBR economist Pushpin Singh said yesterday: “Today’s UK inflation figures came in higher than expected, with price rises as measured by the CPI reaching a near 30-year high of 5.4 per cent in December.

“This marks the highest rate since March 1992, though there are signs pointing to the view that inflation is now peaking. Today’s figures come on the back of the Bank of England’s base rate hike in December to combat surging inflation.”

Mr Singh added: “With November’s figures indicating strong output growth and a resilient postfurlough labour market, along with mounting evidence of the UK having moved past its Omicron peak, the UK seems well-poised to continue its economic recovery into 2022.”

Meanwhile the Silver Voices campaign group for people over 60 has launched a petition on the Government’s official website calling for an emergency £500-a-year state pension increase.

Group director Dennis Reed said: “Millions of older people are at their wits’ ends trying to make their pensions stretch for weekly essentials. Food costs are rising sharply and everyone is dreading the next bill from the energy company.”

And Mr Reed added: “The Government must admit that it made a cruel mistake in suspending the triple lock so hastily and step in now with an emergency payment to bump up pensions. Continuing to dither in the face of the worst cost-of-living crisis in decades will condemn millions of pensioners to a cold, hungry and miserable winter.”

CBI lead economist Alpesh Paleja said: “We’ve not seen the end of rising inflation yet. We expect it to peak in the months ahead, not least if, as expected, the energy price cap is raised. With prices on the rise and real wages already falling, it’s likely households will face a cost-of-living crunch for much of this year.”

Paul Johnson, director of the Institute for Fiscal Studies think tank, said people on low incomes would be particularly hard hit by the squeeze on living standards.

He said: “Everyone, particularly those on modest incomes, has had a long period of wages not really growing any faster than prices over the last decade. So another increase at this point is going to be particularly painful.”

TO say that households have had a tough few years is an understatement. Sadly, despite only being in its first month, 2022 looks set to offer little respite. Inflation stands at a 30-year high.And with increasing costs and tax rises coming in April, household budgets are facing a double whammy, which we fear will tip more people into difficulty.

At National Debtline and Business Debtline our advisers are already hearing from more callers struggling to make ends meet. Two in five people do not have enough money coming in to cover essential costs. They are unable to pay for energy, rent or mortgages and, in some cases, food.

Our concern is what happens in the coming months. For those on fixed incomes – including many older people – the squeeze will be particularly acute. There are several steps we need to see from the Government. These include urgent action to help people in need and reforming the way debts to government are collected.

Ministers must look at Universal Credit and cut the five-week wait for claimants receiving their first payment. The underlying problems driving households into difficulty and questions around poverty and income will not be solved overnight.

But the circumstances facing many households in 2022 demand urgent action to help them through this incredibly difficult year. Click here to access National Debtline’s free, independent advice.