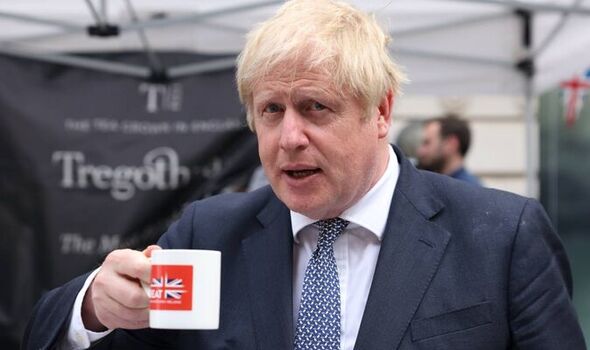 A packed legislative programme of 38 Bills – to be unveiled in the Queen’s Speech this morning at the State Opening of Parliament – will include proposals for slashing red tape on businesses, sweeping away any remaining EU regulations and driving up skills and training.

The Prime Minister said: “This Queen’s Speech will get our country back on track, and I will strive – and this Government will strive – night and day to deliver it.”

It emerged last night the address – to be made by Prince Charles in the Queen’s name – will also announce a major crackdown on protests by Extinction Rebellion, Insulate Britain and other hardline groups that bring disruptive mayhem and misery to transport systems and communities.

Setting out his mission to deliver for the public, the PM said: “In spite of everything we have been through, we are going to ensure that over the two years we have left in this parliament, we spend every second uniting and levelling up this country, exactly as we said we would.”

Addressing cost of living challenges facing millions of households, the Prime Minister is expected to say in his address to the Commons after the Queen’s Speech: “We will get the country through the aftershocks of Covid, just as we got through Covid, with every ounce of ingenuity and compassion and hard work.

“By urgently pressing on with our mission to create the high-wage, high-skilled jobs that will drive economic growth across our whole United Kingdom.

“That is the long-term, sustainable solution to ease the burden on families and businesses.”

Proposed new laws to be set out today will boost economic growth to address the cost of living squeeze, and improve public safety.

Key measures to be announced in the Queen’s Speech will include a Brexit Freedoms Bill to ignite a bonfire of hundreds of Brussels regulations left over from the UK’s membership of the European Union.

Other proposals will include opening up £10billion of investment in the UK through a post-Brexit shake up of the insurance industry and promote long-term growth projects.

And a new Public Order Bill – to be introduced in the Commons as early as tomorrow – will seek to combat the trend towards increasingly disruptive tactics being used by environmental activists and other hardline political groups.

The legislation will ban demonstrators from causing chaos by chaining or gluing themselves to buildings or objects to block roads.

Home Secretary Priti Patel is determined to give police the powers to manage the potentially dangerous and highly disruptive tactics used by a small minority of protestors. Her move follows chaos caused by groups including Extinction Rebellion, Insulate Britain and Just Stop Oil.

The legislation proposes new criminal offences of “locking-on” and going equipped to “lock-on” with intent to cause serious disruption.

Offenders could face a maximum penalty of six months’ jail and an unlimited fine.

Another criminal offence of interfering with key national infrastructure, such as airports, railways and printing presses will also be added to the statute book.

It will carry a maximum sentence of 12 months in prison and an unlimited fine.

Ministers also plan to make it illegal to obstruct major transport works, including disrupting the construction or maintenance of projects like HS2 with sentences of up to six months in jail and an unlimited fine.

And the Public Order Bill is expected to extend police stop and search powers so officers can seize tools related to these new offences.

New preventative Serious Disruption Prevention Orders will also be available for those who repeatedly inflict criminal disruption on the public.

Ms Patel said: “The law-abiding, responsible majority have had enough of anti-social, disruptive protests carried out by a self-indulgent minority who seem to revel in causing mayhem and misery for the rest of us.

“The Public Order Bill will give the police the powers they need to clamp down on this outrageous behaviour and ensure the British public can go about their lives without disruption.”

Chancellor Rishi Sunak yesterday hinted that more Treasury help to deal with the cost-of-living crisis, particularly with energy, could be on its way.

Speaking to BBC Look East in Ipswich, the Chancellor said: “I have always been very clear that we stand ready to do more as the situation requires it. But what I have always said is, once we have better clarity on what energy prices will be in the autumn, then we will be in a position to know what the right response is.”

He added: “Of course, the forces we are grappling with are global in nature. And we are not the only country to be facing higher energy prices or higher inflation in general. You know, we can do things to support people and we are going to do what we can to ease the burden. I wish I could make it completely go away, but I can’t.”

Ministers are keeping “all options open” when it comes to addressing the cost-of-living crisis, the Prime Minister’s spokesman said yesterday.