PITTSBURGH — Like many Trump supporters, Dennis Tippie watched the steady tallying of votes that wiped away the president’s early lead in Pennsylvania, not with a faith that democracy was playing out but with dark and rising anger.

“If he does end up with that number of electoral votes,’’ he said last week of Joseph R. Biden Jr., as Mr. Biden appeared on his way to winning the state and the White House, “he would have gained them through fraud, deception and simple criminality.’’

No evidence exists of fraud, deception or criminality in the tallying of absentee ballots that piled up during the worst health crisis to hit the nation in a century. The state’s Republican-controlled legislature refused to allow those ballots to be processed as they came in, compounding the delays until the race was called on Saturday, making Mr. Biden the 46th president-elect.

But Mr. Tippie, a retired truck driver who imbibed the president’s words partly through Fox News, agreed with Mr. Trump and his surrogates that the election had been stolen before their eyes. He lives in Nanty Glo, Pa., in the interior of the state that the so-called elites in Philadelphia sometimes call “Pennsyltucky.” To Mr. Tippie, Mr. Biden is “a total fool,” his running mate, Kamala Harris, is “a very scary woman,” and a Biden presidency would be both illegitimate and disastrous.

But, he said, “I’m not resigned to him being president.”

While Mr. Biden pulled off major successes in flipping Michigan, Wisconsin and Pennsylvania back to Democrats, and achieved the rare ouster of an incumbent, he did not notch the landslide demolishment of Mr. Trump that many Democrats had yearned for, despite leading in the popular vote by more than four million.

Instead, Mr. Biden will inherit a country where many Americans are already backed into mutually hostile corners. It threatens the president-elect’s most basic campaign pledge: to unite Americans, to move past divisiveness as a governing strategy, to heal the “soul of the nation.”

“I think we’re a long way from unifying the country, and I’m sure that Trump will continue to work on dividing us,” said Catherine Lalonde, the chairwoman of the Democratic Party in Butler County, a blue-collar region in western Pennsylvania.

“I don’t believe his supporters will accept Biden’s win and wouldn’t even if it were a larger margin,” she added. “I have a feeling that all the Trump flags and signs will stay put until they disintegrate.”

Interviews with voters in Pennsylvania, primarily Trump supporters, showed that Pennsylvania mirrored a nation still mired in tribal polarization. The country may be staggering forward as bitterly divided as ever.

Many of the president’s supporters were swayed by his blizzard of disinformation that illegal voting had been rampant and election officials were suppressing a Trump victory. They envision a Democratic White House that would kowtow to leftists, give up the fight against China and embolden rioters and looters.

While Mr. Biden did slightly better in Pennsylvania’s many Trump counties than Hillary Clinton did in 2016, the margins did not tighten as much as Democrats expected or hoped for. With record turnout approaching 7 million in the state, Mr. Biden’s advantage over Mr. Trump was less than 1 percentage point as of Saturday night — a far cry from Barack Obama’s victories of more than 10 points in 2008 and more than five in 2012.

Certainly, there were Trump voters ready to accept the results as fair and to move forward.

Chace Torres, 37, was making grilled-cheese sandwiches for his family in Northampton County on Thursday night. At the time, Mr. Trump’s lead in the state, once close to 700,000, was ebbing away as mailed-in ballots were counted.

“I think the Trump supporters are going to suck it up and move on,” said Mr. Torres, a union railroad worker. “We’re not going to run out tomorrow and loot and riot. We’re going to put our heads down, go to work, feed our children, take care of the country like we always do." 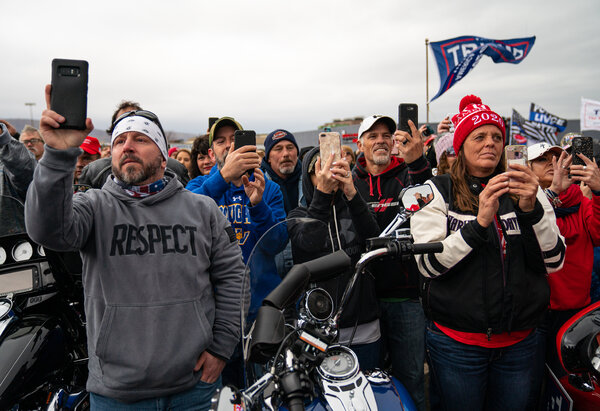 But others were not swayed by Mr. Biden’s appeals for unity after four divisive years.

Jessica Bell, a Trump voter in suburban Philadelphia, said, “we are locked and loaded” because she sees the country headed for civil disorder.

“I have my TV on the news 24/7,’’ Ms. Bell said. “I have my phone in my hand keeping up with social media. I’ve gotten about six hours of sleep since Monday. I’ve been watching very, very closely.”

She cited reports on social media and Fox News in support of her belief that the election was hijacked: black Sharpies given to Arizona voters made ballots invalid; Republican poll watchers in Philadelphia were not allowed to see the counting; Nancy Pelosi controls the company supplying election machines in Nevada.

Those charges, some raised by the Trump campaign and the president himself, are distortions or outright conspiracies. Arizona election officials, for example, said black Sharpies do not invalidate a ballot, and a judge allowed observers in Philadelphia within six feet of ballot canvassing.

But Ms. Bell, 32, who left a job this summer as an assistant in a doctor’s office, insisted that “Americans are being silenced” and made the baseless charge, “It’s a coup.”

Some Democrats were hopeful that with Mr. Trump out of office, the nation would return to a semblance of normalcy, that sowing division as government policy would end.

In Erie County, which Mr. Trump had won in 2016 after it long voted Democratic, the president had raised expectations and hopes with his promises of restoring industry. But Mr. Trump lost Erie County this year, in part because of his mishandling of the coronavirus pandemic and the chaos he sowed, said Carl Anderson III, a Democrat on the county council.

“His flaws have been exposed," Mr. Anderson said. “There are elements of extremists and ideologues who will initially not accept the outcome and perhaps protest, but as the dust settles and reality emerges, normalcy will take over.”

The nature of Mr. Biden’s narrow victory in Pennsylvania underscored the challenges he will now face. His vote count was driven by a surge of suburban voters: He improved on Mrs. Clinton’s 2016 margins in the vote-rich counties surrounding Philadelphia by notable margins, including by more than 7 percentage points in Chester County and nearly five points in Montgomery County, the state’s third most populous.

But in red Pennsylvania — a vast swath from the northeast through the center to the southwest — Mr. Trump gave up very little ground. He won most rural and small-city counties, with their faded industrial economies, by landslides. It suggests that the message behind Trumpism — a combination of a promised industrial restoration and white grievances — has lost none of its appeal.

“The people here still feel forgotten," said Rob Gleason, a former chairman of the state Republican Party who lives in Johnstown, once a steel-making center, now bleeding population and struggling. “I can’t tell you how many people are saying Trump’s saying what I’ve been thinking all my life.”

Four years ago, Cambria County, which includes Johnstown, went for Mr. Trump by 37 points. This year, the county favored him by an identical margin.

“The Trump support here in the rural counties and out west, it will linger for two years,’’ Mr. Gleason said.

He predicted that with Mr. Biden in the White House, Republican senators will block him at every turn, with an eye on gaining seats in the 2022 midterms.

“You know the Senate won’t give him an inch," he said.

Democrats’ opinions of Trump supporters over the past five years have been driven partly by reporters’ treks to places like Johnstown, once a Democratic stronghold. Many Democrats view the president’s base as being in thrall to an authoritarian, energized by his racism and xenophobia, and unable to separate reality from his endless lies.

Many Trump supporters, in turn, have no more generous view of Biden voters. “Most of them are morons,” said Lois Peters, a retired department store saleswoman in Westmoreland County.

She was baffled that Biden voters could not see what she does, that the former vice president is mentally unfit to lead, and that a permissive, liberal Biden administration would give rise to violence and looting, as in the aftermath of some demonstrations against police shootings and abuse of Black people this spring.

“That V.P. of Biden’s, oh my God, that woman is vicious," Ms. Peters said of Ms. Harris. Then she caught herself. “Now I’m sounding vicious,” she said. She continued, “But I feel like that, I do.”

Mary Jo DePalma, 60, who with her husband owns a jewelry store in Westmoreland County, said Democrats “seem to hate the president so bad” that she feared even Mr. Biden’s victory would not end their animosity toward the right. “It’s going to take a miracle to heal the nation,” she said. “I believe this started a long time ago, not just in the past three years.”

“I hope two years from now, I’m dead wrong," she added. “I want the country to be united. I want to continue to have faith in America.”