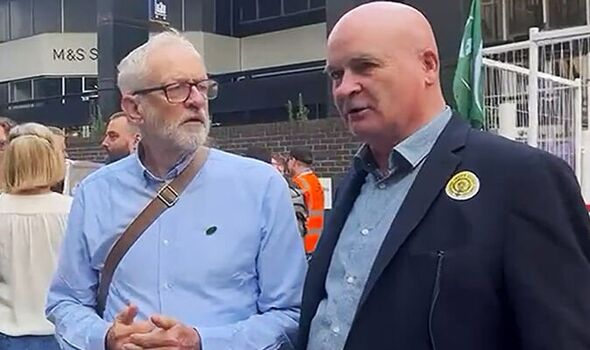 The former Labour leader was seen chatting to union baron Mich Lynch outside Euston station as he stood with those causing misery for millions of Britons across the country today.

Only around one in five trains are expected to run on around half the network, with some areas having no trains all day.

Trains will also be disrupted on Thursday morning with a later start to services as employees return to duties.

The industrial action has caused chaos for millions of commuters as they struggle to get into the office.

In a message on social media last night, Mr Corbyn gave his “solidarity” to those on the picket lines and the rail strikers who are “fighting for fair pay, conditions and safety”.

He urged his political followers to “visit your nearest picket line and show your support”.

The former Labour leader is a long-term close ally of Mr Lynch and teamed up with the head of the boss of the National Union of Rail, Maritime and Transport Workers in March to tell Britons: “If you’re not in a union, join one.”